Just like the season opener in Colorado, Friday's loss in Chicago may have been exactly what this team needed.

Share All sharing options for: Takeaways: An Important Loss

1. Losing to the Chicago Blackhawks may have been a good thing. The Ducks have developed a habit of spotting their opponents multi-goal leads and coming back to beat them. This is a good thing because they know they have a chance to win even if they're down. Their attempted comeback at the United Center fell short, and it taught them that trying to come back against a team like the Blackhawks is a lot different than doing it against, say, the Nashville Predators. If the Ducks are going to play for the Stanley Cup this spring, they're going to have to go through teams like Chicago, and their confidence in their ability to erase a deficit might just be less important than the knowledge that erasing a deficit doesn't always work.

2. The amount of time it takes Jakob Silfverberg to accept a pass, put the puck into shooting position, and release a powerful wrist shot is very, very short, which is a big reason why he plays the game with a shoot first mentality. This is a good thing, because if he played the game any other way, he'd be wasting his talent. That being said, shooting isn't always the best option available. More than a couple times in the last week, Silfverberg has had a teammate wide open in better scoring position, and still elected to take the shot. The most egregious such play occurred with just under twelve minutes to play in the Chicago game, when the score was still 2-0, and Silfverberg went for an outside chance at a goal rather than a great chance at an assist on what would have almost assuredly been Cam Fowler's goal.

3. Teemu Selanne's two goals in last week's blowout of the Vancouver Canucks bring his career total to 682. Assuming he remains healthy and continues to sit for one game of each back-to-back, he will play 27 more regular season games. In 39 games thus far, he has scored seven goals, which puts him on pace for five more in his remaining 27 games. This does not bode well for 700 Club aspirations, but breaking into the top ten is still conceivable. Nine goals, one every third game, would be an increase from the first half's pace, but not an unrealistic one, and it would move him past Mario Lemieux. Eleven would best Steve Yzerman's total, and thirteen would top Mark Messier.

4. Sheldon Souray isn't going anywhere. He will not play this season, and as such he cannot be traded. The upside is that his cap hit is nonexistent so long as he remains on injured reserve. With him out of the equation, Luca Sbisa and Viktor Fasth become the only injured Ducks who can still make an impact this season. Eric Stephens has this update on Sbisa:

5. I'm still not sure what to make of that Vancouver game. Tom Sestito now has 58 more penalty minutes than the second most penalized player in the league, and the following piece of boxscore isn't even the worst of his teams' season, as far as penalties go. If you don't believe me, check this out. And I've heard enough about their "moral victory" over the Los Angeles Kings a week ago. A real moral victory would have required them to score more goals than their opponent. 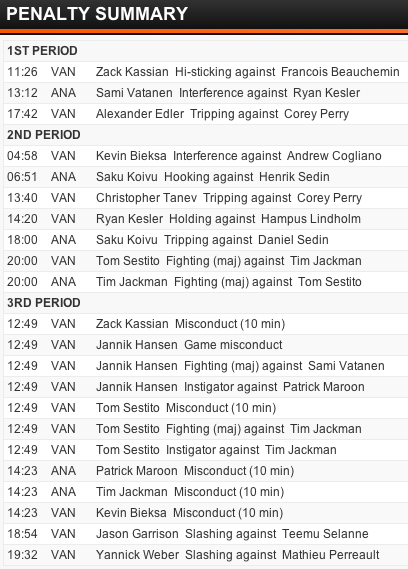 6. Anyone else nervous about the upcoming games against the Kings? [Ed. Note: YES! -CK] All I ask is that the Ducks pretend they're playing St. Louis again. Something about that seems to work.