The most sophisticated advanced stat in the sporting world today is Pizzametrics. What makes it advanced? I DON'T KNOW I JUST MADE IT UP THIS YEAR GET OFF MY BACK MAN. 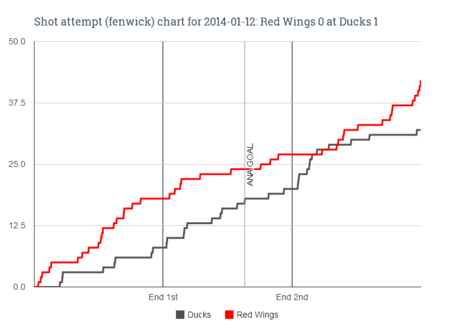 Both teams were coming off games the night before, and Detroit carried the play early on. After the first 10 minutes, Anaheim looked about ready to drop the puck, so play improved. The most impressive part of this win is the final score: blanking any opponent in a tight game is a positive. I particularly enjoyed the pressure the Ducks exerted after scoring. They didn't "white-knuckle" the lead here until the very end, which is normal against any team down one goal. 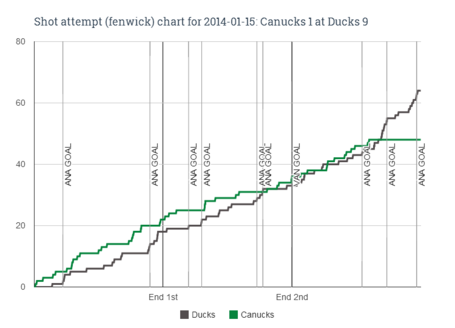 The Canucks are still a deceptively good team in terms of carrying play. With more finishers throughout the lineup, they'd be lethal. The problem is that they only have three or four players who score, so all that possession tends to get wasted. This was a much closer game than the outcome showed, but the lack of composure throughout that Vancouver team burnt them against a team in Anaheim that can score. 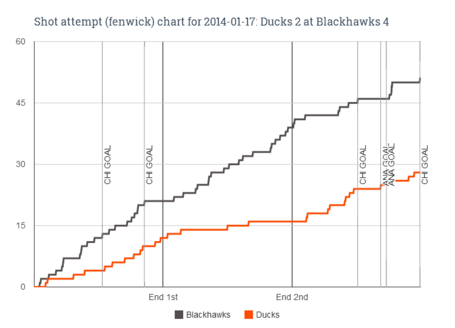 The problem with scoring nine in a game is the next game, because that's not a repeatable thing. This game wasn't as one-sided as it looked on the stats sheet for a simple reason: the Ducks gave the Hawks this game. During the win streak the team got away with a lot of mistakes. Chicago buried them on sloppy passes, lazy giveaways, and really shoddy coverage errors. Why have they won despite that? Very few teams can score like the Hawks can. They did, and the Ducks paid. 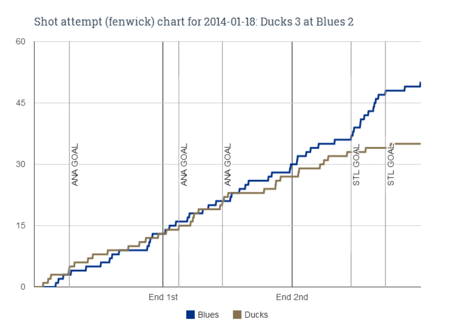 After dropping an ugly game, Boudreau's message was probably easier for the guys to hear after so much winning: "Stop trying to be fancy and play simple. And stop chasing the [bleep]ing puck!" Lo and behold, the simple game prevailed. The team passed better, they supported the breakout better, and they skated better. Against Chicago, the team kept cheating forward to enter the zone and overchallenging on 50-50 pucks, drawing themselves out of position. The Ducks played a stronger team game as a result, and it wasn't until the predictable end-game push by St. Louis that they stopped pushing play.

Sami's been a standout third pairing defenseman. His minutes are limited, but he's a positive player when he's on the ice. For what he is, he's doing well - and he's making his partner better at EV strength, which is really what puts him over his previous three slices. Boudreau's deployment of him has been another unnoticed talking point. This coach doesn't get enough credit for putting his players in positions to succeed. This is why the irony of Vatanen in Norfolk will be fun to watch around here.

I want to note something here despite the slice not changing: Saku is a negative possession player in a bad way. This note is more to recognize that while giving him a caveat. After Getzlaf, he sees the hardest competition and zone starts. If his linemates were as poor as he, his numbers would be less. If he maintains this pace though, he'll lose a slice.

His more or less set pairing with Beleskey has helped him improve his overall possession game. He still sees the softest competition of all the centers on the team, but his numbers are trending the right way - especially in the last couple weeks. But Bones is a funny one: in games we win by more than a goal, he's usually really negative because Gabby changes his role.

There are a lot of little details I could look at when explaining why the Ducks PP has improved. Some are personnel related, like Getzlaf on the side board instead of at the point. Some are the improvements the players at the point have made in getting pucks on net, or "beyond the first pair of skates," as they say now. Some are the net front players doing better screening goalies. It is a little of each, but all of those are still random events. Perry could be screening a goalie magnificently one PP, but the bounces don't go his way. The next PP, he's barely getting to the front and it's already in the net. Like everything else, PPs are random chance too.

Last season, the Chicago Blackhawks PP started off pretty slow. Despite ending up in the top five in the league (if I recall), the perception that they had this lowly, inexplicable PP carried through to their Cup win. I remember hearing the NBC guys say the Hawks needed to get their PP going to beat the Bruins, which amused me because like I said, I'm pretty sure it was a good unit.

The Ducks PP is sitting 15th, which is great considering it was awful to start the year. So "narratives" are taking a slight effect here: this team's PP is fine, but the perception that it sucks will probably stay until next year. As such, people are still wondering what the deal is with the special teams, and that's remarkably easy, because the Hawks and Ducks had/have the same problem once you extend the possibilities beyond the random chance I referenced above. Zone entries.

First, understand: defensive zone play on a PK is basic. There's no transition to worry about, so the goal is simply to defend the shot and any rebounds once the zone is gained. How this is accomplished can vary a little, but once the shot comes, most PKs tend to collapse to remove a rebound or second attempt from in close. Because being down a player means no man coverage, the zone is set to remove the slot and limit puck movement from the side board or below the goal, where creative guys can kill a PK.

The Blackhawks made a noted effort to carry the puck into the zone on the PP last season, which has carried through into this season. If the PK lined up and prevented a clean entry, Chicago would regroup and attempt it again. Normally, a dump-in occurs at that point - which on the PP can work to better effect, because it draws PKers to the puck and out of their "box." But puck retrieval also takes time, so even if the PP gets it back on a dump, chances are some attackers are out of position as well, and another few ticks off the clock occur to set up.

The Blackhawks were determined to carry it in to prevent the uncoordinated play of a dump as well as to maintain pressure on opposing players. Knowing this, it looked like PKs were collapsing into their box much quicker, knowing they wouldn't have to chase a dump. While the Hawks retained possession and were able to begin setting up quicker, teams were in better position to defend because the puck was still in front of them. At first, this made Chicago's PP look pretty shoddy. Gradually, once players figured out how to exploit PKs, it became highly efficient - skilled players do that.

I can't remember when, so I can't find the quote, but Joel Quenneville basically said he wasn't concerned with the PP because his team still had the puck throughout. While it wasn't scoring right away, it was wearing down teams and keeping them from scoring. It seemed smart to me, given the recent advances that statistical analysis has turned up in hockey.

Fast forward to this season and the Ducks PP. Bruce Boudreau has his PP doing roughly the same thing now as I saw from Quenneville's team last year. I want to say I remember him saying something similar to Coach Q too in that there's value beyond scoring to changing the flow of the game and getting two minutes worth of chances. But the Ducks enter the zone with possession, set up quickly, and get a lot of shots away.

At first, they just had bad luck - as can be measured by the fancystats. They took plenty of shots, they had plenty of chances, but their "puck luck" wasn't going for them. In recent weeks, Anaheim's PP success has turned, and it looks much more lethal. Nothing has actually changed to make the PP more effective beyond the normal tweaks a coach will make anyway - again, a bit of randomness there. But to me, it is the Ducks skilled players finally getting comfortable creating chances with a newer scheme and having the luck of the puck go with them.