What attraction ideas didn't make it to the upcoming Stadium Series game at Dodger Stadium between the Anaheim Ducks and Los Angeles Kings?

With the days ticking away towards NHL taking over Dodger Stadium for the first regular season game held outdoors on the west coast, we've slowly begun to catch glimpses of what to expect when we show up at the legendary baseball venue for something that thankfully isn't baseball. 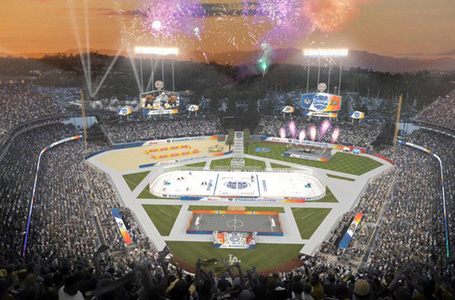 Artist Rendering via the LA Times.

Over home plate will be a roller hockey floor to pay tribute to the sport that has provided the starting point for so many hockey-playing Californian kids, including Emerson Etem, Bobby Ryan, and perhaps most notably myself.

Out in left field you will find a beach volleyball court that will likely be populated with bikini-clad ladies and well-tanned surfer dudes. Mind you this game is in January but because this is California that won't be a problem whatsoever. 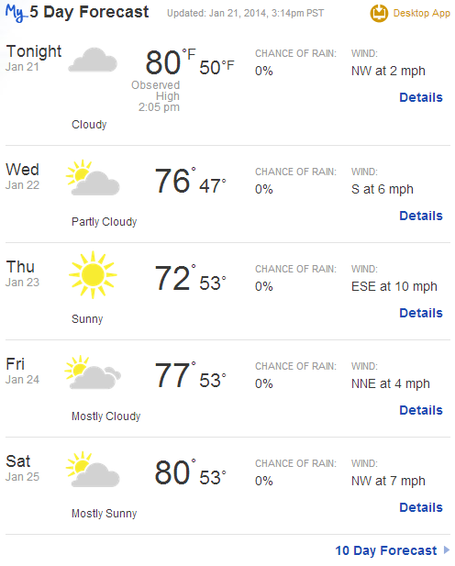 What's that East Coast? I can't hear you over my sunshine and ocean waves.

In right field the performance stage will be set up... right next to a swimming pool. [Edit: based on recent images, it appears as though the swimming pool has been nixed.] Again because this is January in California and that's completely normal here.

But seeing as these are the ideas that the NHL thought about and said "That's a good idea. Yeah, let's do that!" to, it got me wondering what didn't make the cut. We all know there had to be dozens of meetings before this final list was compiled so what were some of the things that got left off?

After some Game Boy-level computer hacking (the password is "Crosby"), my spies provided me with this list of failed or otherwise unsuccessful idea candidates for this outdoor spectacle.

1. Horrendous Traffic Jams - To pay homage to one of California's greatest and most unavoidable landmarks, the 405 freeway at rush hour, the NHL proposed installing completely unnecessary and frustrating traffic jams all around Dodger Stadium and throughout the concourse. The idea was rejected when the league realized the fans are probably going to create them already anyway so why waste the money?

2. California Coast Tribute - What do people not from California think of when they hear that name? Well odds are it's one of three things: celebrities, swimming pools, or the beach. While the league eventually settled on just having a beach volleyball court in left field, the initial plan it turns out was to have a fully-functioning replica of the beach right there in the stadium, complete with surfers, bikini clad ladies, and marine wildlife. This idea got shot down in prototype testing when the proposed Sharks proceeded to choke with every major test performed outside of their tank.

3. Swimming Pool of Guacamole - Californians love Avocados so why not put a giant vat of delicious guac out in the outfield? Well because the entire crowd would be pouring out of the stands to dive headlong into it only to eat their way out. Or maybe that's just me. I love guac. Dammit now I'm hungry. Anyway this idea was rejected and replaced with just a regular swimming pool because we have plenty of those too.

4. Venice Beach Tribute - Ah what's more California than the urban scenes of Venice Beach? Located mere miles from Chavez Ravine (translation: at least two days of freeway driving on the aforementioned 405 freeway) this landmark has been featured in movies, photos, music videos, and many other forms of media for decades. Why not bring some of that California Culture to the Stadium Series? Well the idea was apparently struck down when the Dodger Stadium people forbade the NHL from hiring kids out of Juvenile Hall to graffiti the hell out of the venue's exterior and let's be honest why waste the money bringing all the homeless people up when they'll probably just show up anyway? (Joke idea submitted by Jen Neale)

5. In-N-Out Burgers At The Venue - What's more Californian than a Double-Double Animal Style? The fast food burger chain that started in Baldwin Park has become a staple of your typical Californian's diet would make a great addition to the west coast culture theme of the event. This idea was shot down when In-N-Out decided they wouldn't be down to charge food prices that make Disneyworld and Staples Center look like a soup kitchen. Or at least I think that's the case if the ticket prices were any indication.

6. "What is Hockey?" Picture Guides in the Game Programs - It's safe to say that for some people, this might be the first time they've ever seen a hockey game, so a brief explanation of the sport (including questions such as "What's a puck?" or "What is that weird surface they're playing on?" or "Where's Kobe?") would be a great way to help answer some questions and solidify some growth in the market. In fact, since many of the attendees to this event will likely be Typical Kings Fans, I don't know why this was rejected.

7. Celebrity appearances - What's more Hollywood than stars? Obviously not the Dallas kind because they weren't invited. We already know that Will Ferrell and Jon Hamm are confirmed attendees for Saturday, but the guest list has expanded to include stars like long-time Kings fan Matthew Perry, Cuba Gooding Jr. Alyssa Milano, Colin Hanks, Kevin Smith, and back-on-the-market-Hilary Duff. The NHL decided it wanted to bring even more celebrities, but that was shot down quickly when despite NBC and Pierre MacGuire's insistence, the Pittsburgh Penguins refused to release Sidney Crosby from his game versus the Dallas Stars so he could attend a game which he has literally nothing to do with so they could talk about him anyway. I guess they'll just have to settle for the talking about him anyway part.

8. Board Shorts/Tank Tops Uniforms - Seriously why not? What's more California than heading out for a stroll on a lovely afternoon in January in flip flops, board shorts, and a tank top? Why not play hockey in it? I can remember many a day year-round strapping on my skates and taking to the street to get some practice in, stopping only for meals and the occasional car. This idea was great for the NHL until they realized jerseys sell for more money, and it seems they made the right choice since the Stadium Series unis have been going like hotcakes. That being said I really hope Bruce Boudreau rocks a Hawaiian shirt behind the bench; the traditional market rage at something that simple would be magnificent.

9. Musical Guests - With an event that's going to have as much spectacle as this, of course live music is a good idea. But let's not forget this is the NHL booking the talent. Mind you they couldn't get anybody better than the Far East Movement to play the NHL Awards one year (because I guess Hall and Oates were "busy"). So what are we stuck with? Five for Fighting who show up at literally anything having to do with hockey, KISS who have overpromoted themselves to death in support of their arena football team that likely won't last more than two seasons, Jordin Sparks who I completely forgot existed about three months after she left American Idol, and the USC marching band. So yeah... pretty much par-for-the-course in terms of musical talent from the NHL. Meanwhile, Nickelback continues to sit by the phone anxiously thinking "It's not too late they could still call last minute..."

10. Alternative Overtime - So you remember the beach volleyball court and roller hockey floor I talked about? Yeah those will definitely be there. But what the NHL didn't say is that it was initially proposed that this game be the first beta test of a new overtime system to replace the often-controversial shootout. Should the game end regulation in a tie, the players would change their skates into rollerblades and the overtime period would then shift over to the roller hockey floor for five minutes of 3-on-3. Should the game remain tied after that, each team would select its best two-person team for a first-to-21 beach volleyball game (yes, win by two... duh). Should the league like the results, we would likely see this system implemented next year. However this got shot down because apparently everyone else doesn't have California's awesome weather and beaches so they can't play those games. Man, those other places all suck.