The "Freeway Faceoff" is renewed in Anaheim before heading into the surreal and ethereal realm of Morpheus that will be Dodger Stadium on Saturday. (Too geeky? Don't care.)

I wanted to put the fenwick chart from extraskater.com for the last meeting between the Ducks and Kings here, but that page has been down for the last couple of days. So instead here's a rendering of what I think it probably looks like: 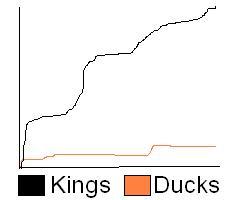 Somehow the Ducks were able to push that game to a nine round shootout before losing 3-2, despite playing what I consider to be the worst game of the season (including the 6-1 shellacking at the hands of Colorado on opening night).

Keys to the Game: As Derek said in his Takeaways post on Tuesday, the Ducks need to pretend that they're playing the Blues tonight. There are a lot of similarities between the way that Los Angeles and St. Louis play. Both are big teams with strong defensive structure, high class puck moving defensemen and scoring throughout the lineup. However, the Ducks have won five of their last six against the Blues and only three of their last 11 against the Kings. Of course, that probably has something to do with the disparity in the goaltending between the Kings and Blues as well as the fact that, based on the last two years of playoff results, the Kings are a notch above St. Louis in playing that style of game.

So, what do the Ducks need to do to turn around that ugly record against their rivals up the street? First, make sure their passing is clean, direct and simple. They got eaten alive by Chicago's sticks in passing lanes on Friday, but turned a complete 180 against the Blues on Saturday. If they give the Kings a chance to steal the puck in the neutral zone, they will and it will result in extended shifts of defending in the D Zone, just like it did back at the beginning of December.

Scoring first would be a huge bonus, even though the Kings are surprisingly only 15th in the league with a .688 win percentage when scoring first to the Ducks' .733 (12th). Still, once the Kings have the puck, they refuse to give it back, especially when they're in the lead they grab the puck hold it deep in their opponents' zone with their size and strength and suffocate them to death with puck possession.

The only way around it is to beat them at their own game, which is so difficult because they're so good at breaking up plays and causing turnovers in the neutral zone by way of body/stick positioning and hitting. So, once again passing, zone entries and winning 50-50 pucks will be key for the Ducks to dictate the pace of the game instead of having it dictated to them.

Side Note: This is one of the main reasons why playing them on worse than normal ice conditions Saturday at Dodger Stadium is terrifying.

What Can We Learn From This Game: I don't think the loss to Winnipeg relieved any pressure as far as the home points streak goes, because there is still plenty of pressure playing a divisional game against a team that has had your number for the past two and a half years and is a proven Cup contender. However, it could have been just the wake up call the Ducks needed to really let the coaching staff's message sink in heading into this game.

They did a lot of good things to carry over, but it still wasn't enough against a crap team like the Jets. They'll seriously need to step up their game to have a chance tonight.

Can the Ducks learn from their mistakes in the previous meeting with the Kings and play like they have something to prove (which they do) the way that they did against St. Louis on the weekend?

In my estimation, Chicago and LA are still the class of the West, despite the Ducks topping the standings because of the way they play defensively and the way they step up in big games. As we saw against the Hawks on Friday, the Ducks did not. Now they have another opportunity to show that they belong in that conversation of Western Conference Cup contenders. They've blown it on two occasions so far this season (on Friday at Chicago and in the shootout loss to the Kings) it's time for the Ducks to show what they've got against serious competition.

Fearless Prediction: Cop Out, I'm so pessimistic about these next two games, I'm not even going to go there.