Playing Outdoors is not a First Time for these Ducks

Taking a look at the Anaheim Ducks who have participated in previous NHL outdoor games.

Share All sharing options for: Playing Outdoors is not a First Time for these Ducks

For most players, outdoor hockey brings back the childhood nostalgia of red noses, puffy jackets, neighborhood rivalries, backyard rinks, and the soothing sound of blades cutting the ice. Ahh--there really is nothing like the outdoors, eh?

Nahh--let's return to the present, where's it's a nice sunny and toasty average 80 degrees in JANUARY. Damn right this is a Californian winter. Where the sun always shines, skies are forever blue, waves continuously crash, and the palms trees always sway. Toes in the sand all year long here folks. So what other place is more ideal of a game of outdoor hockey? It's a bit hard to believe, but we are now a couple days away from witnessing hockey history in California.

While an outdoor NHL game is a new and foreign idea for most Californians, most of the players have played outdoors. But what makes the Coors Light Stadium Series at Dodgers Stadium so awesome is simply the fact that it will be the first time that players will be playing ice hockey outdoors...in California. The day will likely start with a temperature of high 70's-80's, will decrease to a nice chilly low-50's, ideal for a hockey environment. Fans will actually be able to wear their jerseys alone without having to worry about freezing to death.

Not only will it be a first outdoor game for all most all fans, but it will be a first outdoor NHL game for most of the Anaheim Ducks...with an exception of a handful. So among the Ducks, who has had the experience of playing hockey in an outdoor stadium in front of more than the Honda Center capacity of 19, 174?

How many players can say they captained the winning team in NHL's first Heritage Classic in 2003? One, and only Saku Koivu can.

Prior to the actual Heritage Classic, legends like Mark Messier, Wayne Gretzky, and Guy LaFleur showcased their play in the first Legends Game. But the show didn't stop there. Not only was the outdoor game a historical one, but Mother Nature did her best to leave her mark on the first outdoor game. More than 57,000 people braved the weather when Edmonton's frigid freezing arctic temperatures fell to -22 degrees Fahrenheit, (can you himagine?!) in addition to the wind chill. The players' benches were installed with heaters(aka butt warmers) and supplied with hot tea and chicken broth. Read more about the Heritage Classic from NHL.com here.

With the season-ending wrist surgery, Sheldon Souray will not be playing with the Anaheim Ducks in Saturday's game. But he has played in an outdoor game, and the first one at that with the Montreal Canadiens. He had one assist with a minus-1 rating and 1 SOG during his 21:12 TOI. 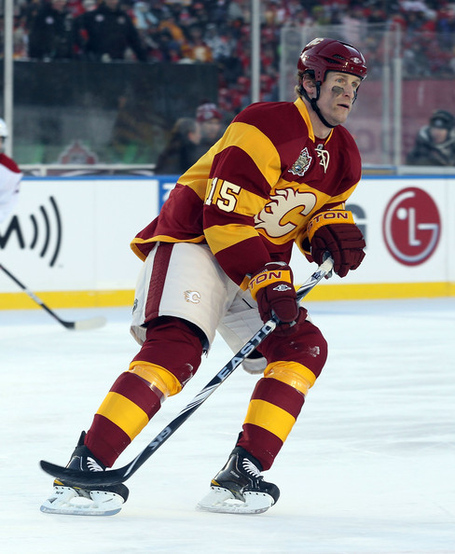 Recently acquired Duck, Tim Jackman, was with the Calgary Flames when he participated in the 2011 Heritage Classic between the Montreal Canadiens and the Calgary Flames. The Flames ended up shutting out the Canadiens 4-0. While Jackman did not register a point during his short 12:46 TOI, he did come out with a plus-1 rating with 2 SOG. He is looking forward for the "special thing" of playing outdoors in LA.

Ben Lovejoy was part of the Pittsburgh Penguins when the 2011 Bridgestone Winter Classic was played out on Heinz Field. Unfortunately for the defensemen, he was scratched. His disappointment was evident: "That was a tough day for me. That was a game that, as a player, you want to be a part of. The buildup, the practices before … you know you're not going to play. That was very difficult."

Almost calling it quits, Lovejoy found himself given a second chance with Anaheim's club. Lovejoy said, "This was one of my goals coming back to Anaheim … to play in this game and to be a part of this, to earn a spot in the lineup where I can be an asset and a contributor here, that teammates and coaches want me on the ice for this game." And that is exactly what he did. Paired with Cam Fowler, Lovejoy has found his niche with the Anaheim Ducks. And who knew, of all places to be traded...Southern California would be the place that Lovejoy plays his first NHL outdoor game?

While David Steckel is not on the Ducks roster at this time and will not make the Stadium Series appearance, he has made several appearances with our club and is currently playing with our affiliate the Norfolk Admirals. So I figured, I might as well give him a brief nod. Yes, he is known as a face-off specialist. But let's be honest--when it comes to Steckel's role in the 2011 Winter Classic, it was a memorable one. There is only one play we need to show--this hit gave NHL's Poster Child a concussion. 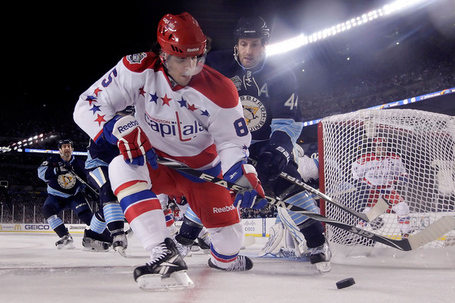 Despite his limited ice time of 11:11, Perrault ended his night with 2 SOG. Led by the one and only, then-Washington Caps Coach Bruce Boudreau , the Caps beat the Pittsburgh Penguins 3-1.

Aside from Matthieu Perrault, there's one other important Duck that we cannot fail to leave out. Coach Bruce Boudreau. At the time of the 2011 Bridgestone Winter Classic, Boudreau was coaching the Washington Capitals. He was also featured in this unforgettable NHL 24/7 segment that has since cemented his relationship with Haagen Daaz in our memories. So I'll leave you with this piece of happiness....

[Ed. Note: I'm not going to say it, but there is one thing all of these players have in common besides being current Ducks who have played outdoor NHL games before........... -CK]