Being in Mexico for a time a bit ago made me realize: GameCenter doesn't suck. It's actually much better than I previously believed. Still not paying for it here at home though.

I missed a week while in Mexico. So here's two weeks of highlights with charts (courtesy of extraskater.com), maybe a pizza slice or two, and thoughts. 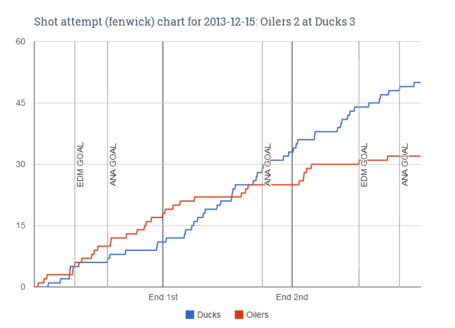 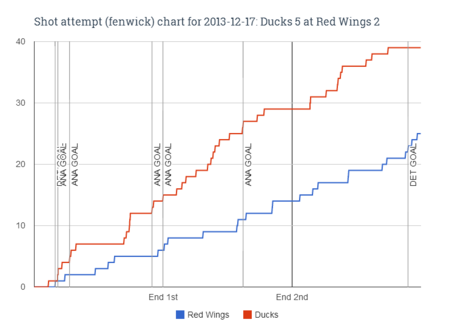 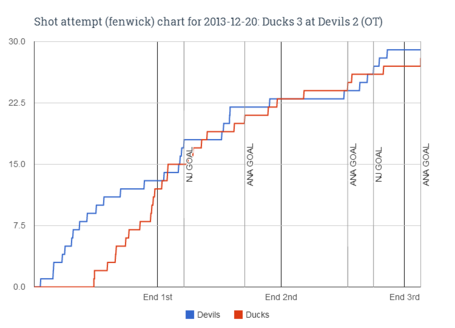 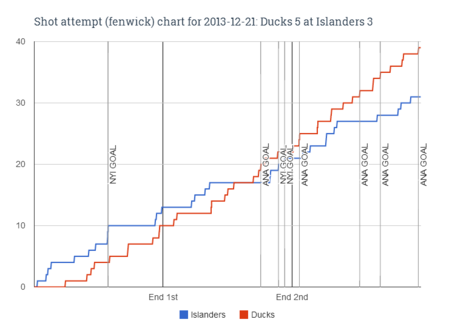 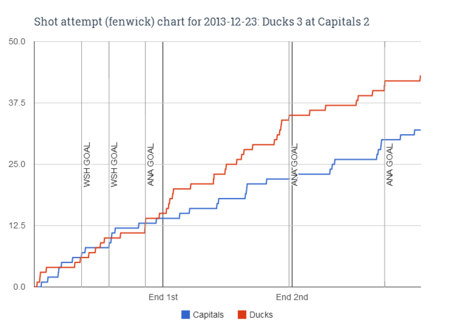 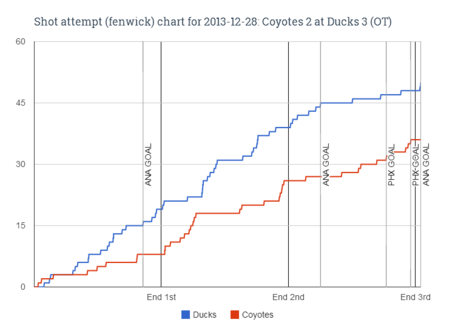 I was able to watch two of the six games due to travels. My son asked me one day, "why haven't there been any Ducks games on lately?" I thought that was funny, but from his 8yo worldview, it was a small eternity indeed.

Francois Beauchemin, D (2P-Met) - This is not Frank's year. What gets me with Beauch is that during the regular season, he's typically a pretty even-to-positive possession player, but during playoffs he's always negative. There's probably something to that in terms of how his game changes, or just whatever - it gives me something to do in this offseason, probably. But this season, his numbers share a less extreme resemblance to his playoff numbers in the red.

Ultimately, what it comes down to is this: more shots are taken on our goaltenders than the other way when he's on the ice. Of all the Ducks defensemen, the shot attempts differential favors the opposition when Frank skates. Yikes. In some respects, even though the Fowler-Lovejoy pairing sees harder competition, Beauch is drawing the next toughest and is playing in all scenarios. Still, I'd like to see his numbers return to previous seasons.

His health is probably the largest reason for his decline in possession effectiveness, as at times he just doesn't look like he has the mobility to do the things he's used to doing - and he gets caught. He's smart enough to bail himself out most of the time, but smarts only goes so far. I wonder if his pairing with Lindholm, while good for the youngster, is harder for Frank than it looks. Remember, the pairing of him and Fowler wasn't effective previously.

Beauch might be a guy like Sean O'Donnell who just plays better with very specific partners. Frank and Sheldon Souray were an effective pairing last year. Maybe he does better with more savvy partners than with younger guys. Who knows. (Oh yeah, I think Beauch is still playing on his off side. That actually reconciles why he'd do better with a more sound positional player opposite of him.)

Reasons why Frank doesn't get one slice of pizza but two: Boudreau doesn't start Frank as often in the offensive zone as other defensemen. Also, Frank hasn't brought down Hamper's numbers despite the pairing, so he's not necessarily bringing everyone down near him. Gabby also uses Frank in every situation in a game, so his even strength possession numbers aren't all there is to his game.

Coaches blending lines mid-game really irks fanbases, I've noticed. Bruce Boudreau has a reputation - perhaps rightfully earned - as a guy who blends his lines somewhat whimsically. He hasn't done so as much as I originally feared when he was hired, so I paid some mind to the times he's done so in Anaheim to guess at his motives. He's been pretty consistent with how he's deployed guys and lines here, even when changing linemates. It doesn't seem that whimsical to me.

Once play begins, the coach is pretty much done with most of his job. He can match lines and control zone starts. He has a timeout. He can yell at the referee. He can yell at his players. But really, what happens on the ice is up to the guys playing the game. A coach preps his team to play but has to stand there and watch them execute. Either they do it well or not.

When things go well, everything is awesome. When they don't go well, what can a coach do? The general principle is that in the first half of a game, don't shorten the bench. It might yield decent results more quickly, but if guys don't have the energy to finish off the game well, it's really all for naught. Tired players make stupid players. That really kills the whole "bench everyone" mentality that mobs get into, and it's legitimately sound not to do it. Often, mixing lines is about all the coach can do to turn things around mid-period.

Going back to benchings, I hated coaches who shortened the bench. It's a very old school, "I'm the boss of you" kind of move, and it blows. Nobody likes playing for that guy, not even the favored ones. Everyone knows the blind axe of idiocy (ie, "sit forever and will yourself to work for me better!") will swing their way sometimes. I could digress the hell out of this point.

As a player, I don't care who coach throws out with me. I care that coach plays me. Everything else I can work with, because it's within the framework of what I control on the ice. While it's true that there's something to be said for "chemistry," that tends to be a more long-term thing. Getzlaf and Perry didn't just click and start making gorgeous plays together in one shift; likewise, they don't digress into bad players in any shifts apart.

Players are pretty smart. When I'm out there, I'm constantly assessing every other player around me - teammates and opposition. More often than not, it's a subconscious thing. I see a guy who doesn't turn well to his off side, and I attack there with speed. My most recent rec league (that just ended) was five-a-side soccer, and we had a guy on our team who dragged his left foot. Like, notoriously so. He'd go crashing into the boards because he'd drag that foot and get it tripped up by the other team.

So we'd feed him balls to stretch him out if he was in tight, because chances are he'd win a free kick after someone tripped up his dragging leg. It was remarkably consistent among the entire team - and the thing is, not one of us discussed doing it. It was never a formalized plan, just the actions of guys who get the game and took advantage repeatedly.

Professional athletes are like that. They do things that they see around them to gain advantage and succeed. The point of that digression is: I literally don't care who was on my line. I had guys I preferred to play with, because everyone does. But there's so many moving parts in hockey that it doesn't work out that I'm always playing with my preferred line or even my designated line.

This is the point to line blending when the game gets stupid seven minutes into it. Boudreau is looking at his team playing flat hockey without much success and, suddenly, down two goals. The definition of insanity is going back to the same well that isn't working on the night, so he does a sane thing and rolls four lines with different combos.

With good teams, play tends to improve because guys start reading the ice more. New mates means new tendencies means new play styles, and suddenly the mind of each guy is firing on all cylinders on the bench because a) he has to stay alert on the bench to hear his name called, b) he has to recognize who he's out with and how to adjust his game differently due to it. Like, I can't call this out enough, especially in wingers - when lines are intact, wingers have a tendency to check out when sitting because they only pay attention to their pivot. "Oh, he's going, ok my turn...what's going on?" Take that away, and suddenly nobody's thinking about after-game plans out on the road when down two while "watching" the game anymore.

Smart coaches will generally go back into their designed lines once play has improved or a goal has been scored, etc. This is good, because once the minds are a'working, then getting back to the chemistry of guys who have practiced together is the best course. They've worked on things, and they're engaged now, boom.

Boudreau will blend lines, but he also goes back to set lines pretty quick when more than three guys start showing up. He's not as inconsistent about this as he's been made out to be. One of the reasons Gabby can alter lines with better success than some other coaches is because he has all four forward lines basically playing to the same system. The Ducks have a funnel system toward the other net, and it seems that players have a blank canvas in deciding how it gets there - so long as play moves that way. He doesn't seal the middle from the bottom six on breakouts, he doesn't demand dump-ins (low risk) from the neutral zone, etc.

So line blending is this thing I'm ok with. Boudreau changing up the lines isn't losing the games, but sometimes I see the Twitter or message board community firing up the blamewagons after losses like his decision to stick Perry out with Player X instead of Player Y is the cause. To players, the combos matter less than the shift counts, and as long as everyone's still basically hitting their shift count goals, changing up mates isn't that big a sweat.