Ben Lovejoy is one of those players where it's a good thing if you don't notice him most of the time. Tonight everybody noticed him, but in a good way as he buried his first two goals of the season.

First Period Recap: The unsustainable trend of bad first periods looked like it was going to keep up very early on. Before most fans had even gotten into their seats, the Oilers took the lead on their first shift of the game. After recovering a puck in the offensive zone, Ryan Smyth worked a puck to Boyd Gordon whose first shot was stopped by Jonas Hiller, but Gordon got to his own rebound and bounced it off Jonas Hiller's stick and in behind him. Only 35 seconds had passed and the Ducks once again had surrendered the first goal of the game.

So some people got to sit down, but many more didn't before Kyle Palmieri tied it.

Off the faceoff from Gordon's goal, the Ducks worked the puck into the Edmonton zone. Ryan Nugent-Hopkins got to it first and lazily fired it off the boards right to Palmieri's waiting stick. Palmieri charged right into the Edmonton slot and wristed a backhander under the blocker arm of Ilya Bryzgalov.

Just 11 seconds after the Oilers opened the scoring, the Ducks had tied the game.

And as you can probably imagine, it didn't stay that way.

After failing on two power plays, the Ducks once again found themselves trailing as Nail Yakupov got ahold of a puck after the Ducks failed twice to clear the puck from their own end after gaining possession. After charging to the front of the net from below the goal line, Hiller failed to cover the puck and that gave the young Russian enough time to slip it between his pads to make it 2-1 Oilers just a little past halfway through the period.

Despite the Ducks losing, they held a 13-10 lead in the Fenwick count, and likewise had possession of the puck the vast majority to this point.

The Ducks did manage to finally come back and tie it late in the frame.

After a nicely executed breakout, Saku Koivu laid a drop pass perfectly in the path of Ben Lovejoy who wound up and ripped the one-timer from the blue line. With Andrew Cogliano blocking out all of Bryzgalov's vision, he had no chance to stop the rocket that found the low left corner of the net. The goal was Lovejoy's first of the season and came just two days after the birth of his first child, so needless to say he was feeling pretty good about that one.

And he wasn't done.

Late in the frame on almost exactly the same play, Lovejoy gave the Ducks the lead. This time the pass came from his partner Cam Fowler, and likewise there wasn't a screen in front of Bryz this time; it just flat out burned him.

With five seconds remaining in the frame, the Ducks had their first lead of the night 3-2.

It was a better first period than we've seen in the past, but likewise had the Ducks been playing pretty much any other team in the league, they would have been much less fortunate. The Ducks outshot the Oilers 16-10 in the frame.

Second Period Recap: The second period looked much better from the Ducks. After allowing 10 Oilers shots in the first period, the Ducks only allowed three to get to Jonas Hiller in the second, all of which came before the five minute mark of the frame.

Edmonton took the only three penalties in the period, including the two which gave the Ducks their only two-man-advantage of the night, a stat that's slightly skewed based on the fact it was only 10 seconds long. However, that being said the Ducks still failed on every chance they got.

In fact they failed to really do anything with their dominant possession of the period, a testament to just how poor the Ducks were at executing plays tonight. 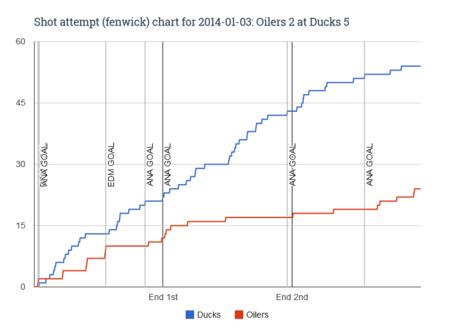 The chart above shows how the Oil gave Anaheim just about everything they could have possibly wanted in terms of chances or opportunities and so many times the Ducks either tried to get cute or somehow overplayed it and squandered the chance.

Everything up until the Ducks finally broke through from an extraordinarily unlikely source: the energy line. A great forechecking effort from the duo of Nick Bonino and Tim Jackman forced an Edmonton turnover to Jakob Silfverberg. Silfver dumped the puck back to Bonino behind the net, who tipped it out in front to Tim Jackman, who had barged his way into the front. Jackman lifted the shot over the outstretched leg pad of Bryzgalov and into the net for his first goal as an Anaheim Duck.

It was appropriate as well for Jackman because he had been playing great up to this point, making the most of his opportunity in the lineup, playing in just his fifth game since December 11th.

The Ducks managed to put 14 shots of their own on the Oilers net, including the last 12 straight of the period, and they headed back to the locker room up 4-2.

Third Period Recap: The Edmonton Oilers that came out to start the third period looked a little more desperate to get things going, but it was pretty clear that the motivation was was hard to come by at this point.

It didn't help that Taylor Hall took a double-minor for high sticking Kyle Palmieri, giving the Ducks four more minutes with the extra man. As you can probably suspect they failed to do anything with it yet again.

However, the urgency was gone from the Ducks game as well, as there seemed to be little to no desire to push the puck up the ice with speed, and the Ducks seemed pretty content just to keep the Oilers at bay. They did a pretty good job doing that for most of the period, but started giving up more shots and shot attempts as the period wore on.

That being said, a great individual effort from Andrew Cogliano brought the Ducks total up to five for the night when he blocked a point shot from Jeff Petry and then ripped past him and shoved a forehand shot past the blocker side of Ilya Bryzgalov on the breakaway.

The goal was Andrew's 13th of the season, and fourth in his last five games. The Ducks have been getting a lot of depth scoring lately, and Cogs is arguably the leader of the pack alongside Nick Bonino and Kyle Palmieri.

Don't let this deceive you into thinking Bryzgalov played poorly tonight. In fact he made numerous brilliant saves on point-blank chances that the unbelievably porous Edmonton defense allowed the Ducks to have.

With the Ducks having eight opportunities on the power play, you can only imagine it was a matter of time before the Oilers would get a chance of their own, and did they ever.

First it was Matt Beleskey going off for hooking David Perron, then 62 seconds later Andrew Cogliano also got the gate when David Perron blew an edge down low while locking Cogliano's stick under his arm (yes, I do mean to say it was a terrible call from the back referee on the play).

The Edmonton Oilers called their timeout and went back to the ice with six skaters lining up. Yep. Six. Dallas Eakins went full-desperation mode and pulled his goaltender with 6:55 to play.

While the Ducks didn't convert into the empty net, they did manage to successfully kill the two-turned-three-man disadvantage to keep their three goal lead. The Ducks did manage to take one final penalty with 54 seconds remaining in the game but it was clear by that point that Edmonton had given up.

The Ducks win their second straight and 12th in their last 13 by a final score of 5-2. Final shots tallied 37-18 in favor of the Ducks.

The Good: The depth scoring came through again big time as the big line was once again held scoreless. It's vitally important that you're able to get scoring from anywhere in your lineup so you're not hung out to dry if your main weapons get neutralized, and tonight was a perfect example of Anaheim's strength in that department.

The Bad: Overall the Ducks weren't good tonight. In fact I'd say "meh" is even being a little nice. The execution level on most plays was very poor. Passes were not crisp, positioning was not good, faceoffs were weak (especially in the offensive zone), and Jonas Hiller even looked a little sloppy at times. When a team dominates the possession like the Ducks did, there is no excuse for so many passes and plays failing due to just carlessness.

The Ugly: I could easily give this award to Dallas Eakins' desperation for pulling his goalie with over six minutes remaining to earn a 6-on-3 power play, but that award has to go to the power play on the other bench. Anaheim's power play was a god-awful 0-for-8 tonight, including a full double minor, and multiple extended chances. While the Ducks garnered 17 shots on all of their power plays combined, they only had probably four dangerous looking chances and likewise didn't execute on any of them. This unit has gone stone cold again, and that's another characteristic of unsustainable hockey if you're also boasting a penalty kill down in the cellar of the NHL. (By the way, the PK was a perfect 3/3 tonight).

3rd MVD: Tim Jackman played a really good game tonight. Every time he takes to the ice, I'm always amazed by his skating ability; for a big man the guy is quick and very agile. Likewise his forecheck pressure alongside Matt Beleskey and the always-useful Nick Bonino had the Oilers pinned in their end multiple times and even generated several turnovers.

2nd MVD: Kyle Palmieri continues his excellent play as of late by chipping in yet another big goal by doing exactly what Bruce Boudreau told him to do: take the puck to the net and use his sweet hands. I'm loving the confidence he's exhibiting right now.

1st MVD: Ben Lovejoy is easily my favorite defensman on this team right now. It's great to see a guy who almost never appears on the scoresheet finally get rewarded for his stellar play in his own end. Not only were his two goals tonight his first two of the season, but they gave him his first career multi-goal game. Add in the birth of his new daughter and you have one extremely proud and very happy dad. And tonight he played like it. I bet Pittsburgh is really regretting letting him go right about now... or at least letting him go for so cheap. (The Ducks got him in exchange for a sixth-round draft pick.)

Next Game: Sunday, January 5th, 2014 vs. The Vancouver Canucks