I thought the outdoor game at Dodger Stadium was good, except did they sell any pizza there because if not then I mean, pfft, what's the point? 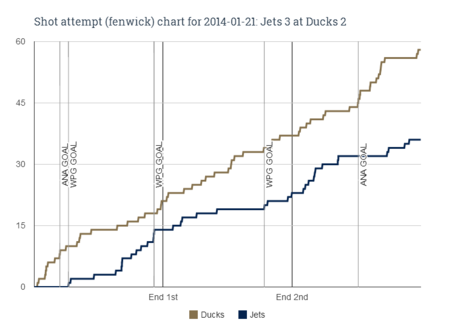 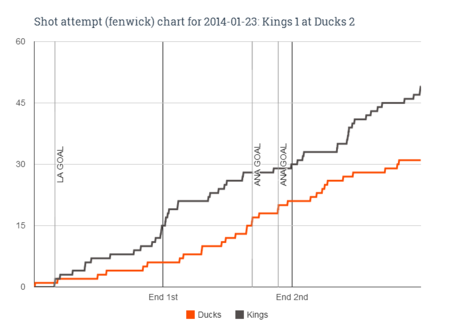 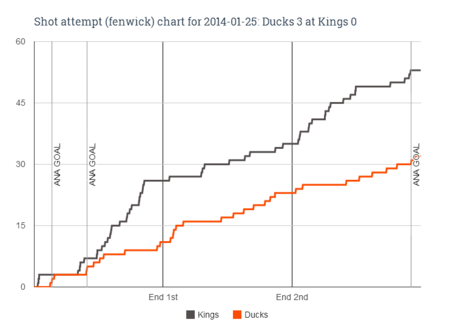 I'm going to get into the Kings and possession and how the Ducks fit into it a bit down below. It figures to get long. Player ratings will suffer. But pizza will be crammed down your throat until you finish this, and you will yearn for more.

The Kings are an interesting team from a stats viewpoint. (Note: they are not an interesting team to watch. They are boring to watch. So, so boring. They love pizza in theory but can't find their mouths when the time comes to eat it.) They have been consistent top performers in terms of possession metrics. They have also consistently sucked at scoring goals. The two things seem to run sideways of the usual conversation among stats folk, namely that strong possession metrics leads to more scoring.

So what gives? I know the answer: the Los Angeles Kings suck. WOOHOO I FIGURED IT OUT. Ok, just kidding. I hate them, but they don't suck. They do, however, suck at scoring, and the way they play suggests to me why.

Seeing as how I don't really get into real numbers in a blog series titled after pizza (the best), I will stay vague and conceptual. Each game starts with an equal split of possession. The team with the most shot attempts, usually sorted by situation, has the higher percentage of possession (comparable to time on attack) at the end of the game. There's a lot of conversation out there about how teams improve possession - and thus, improving chances for and lessening chances against. Like everything in sports, there's really no clear "magic bullet" answer as to how best to accomplish this.

The Chicago Blackhawks and the San Jose Sharks have posted strong possession numbers this year while scoring a ton of goals. Meanwhile, the New Jersey Devils and the Los Angeles Kings have posted equally strong possession numbers but can't score. Not all possession leads to equal scoring chances, obviously. Some people will complicate this conversation some (and validly so) by pointing out how little puck luck the Devils and Kings have. And to some extent, a strong possession game should minimize the drop-offs caused by poor puck luck. But the vast disparity between goals scored for the Hawks and Sharks but not for the Devils and Kings shouldn't be this large when they all hang around the same levels of puck possession - it seems less luck driven to me, in other words.

From what I've seen of each team this year, here's my super fresh, out-of-the-oven take: New Jersey and Los Angeles suppress the hell out of shots attempted against them more than they necessarily drive offensive play. Most defending in hockey isn't focused on stopping shots outright but on limiting chances and retrieving the puck. Goalies exist because shots will happen, and defenders are there to make them easier shots to handle. But the Devils and Kings can outright prevent teams from taking shots.

Both play very smothering defensive systems that keep shots against low. I could describe how they achieve this, and it starts from their play in the neutral zone and against other teams' transitions. But I mean, shots and goals is the focus right now. Both teams' systems are so suppression heavy that offensive creativity is stunted - there's more risk in "trading chances," so controlling chances against is one way to limit being scored on. The result is dull hockey. I'm less certain of the reason for it with Jersey, though I suspect it's more to do with what they do when they do gain the zone - they seem to play east-west to spread defenses more than they cycle low.

But the Kings play dump-and-chase hockey. They are good at dumping the puck and getting it back. They are good at generating shots once they get the puck back. But, and here's the key thing in regards to scoring goals, shots coming from dump-ins are usually lower percentage shots by nature of where they are: the wall, the perimeter, the point.

When watching the Kings against the Ducks the past two games, I noted a couple things typical of dump-in hockey. The first is, they kick the puck out to the point for shots often. That's fine. Half of those get blocked or go wide. Point shots aren't as much of a threat in an era with so much padding (and thus, shot blocking) and when butterfly goaltending has gone away from a pure blocking style. Furthermore, since defensive systems involve all five guys back now, there are more bodies there to choke lanes. The second one is, the Kings shoot from literally everywhere. I counted several attempts from behind the goal line as well as several from the side of the net. (These are terrible areas to shoot from if the expectation is to actually score versus cause a rebound.)There's nowhere they won't shoot, and the theory there is probably sound overall, but it certainly skews the numbers.

Opposing teams are learning to take this dump-in style away more and more. Look at what Boudreau did the past two games. He iced a heavier lineup, sitting some of our more rush-style wingers, and he gave more specific instructions against the dump-and-chase style - namely, taking the body on defense and clogging the middle of the ice to keep pucks on the outside. One goal against in 120 minutes of hockey is a good testament to his planning, despite the sheer amount of "dominance" the Kings possession metrics suggested.

Opposite of the smothering defensive style of game is the more open, "trading chances" play of the Blackhawks and Sharks. They create their chances by a combination of dumps and clean entries, the low cycle, spreading defenses - all that stuff - and by activating their defenders from the blue line and cycling forwards back to cover. They frequently have four skaters involved in the play from the zone in, with the weak side defender sliding over as often as not. They are very good at it.

But this style of play can be exposed spectacularly with speed and numbers. I say "spectacularly," because ultimately every goal in any game is either the result of great skill and/or luck and the product of mistakes. When teams loosen up to attempt to score goals, it often exposes deficiencies going the other way. This is no less true for goals against smothering defenses, there are just fewer goals to speak of - which is the lure to play more defensively, under the false belief it wins more because of less goals against. The trade is usually the lack of offense, so...again, different ways to win.

Going back to the Kings games, I want to make a note about the possession stats themselves. As team scoring can indicate, not all possession is equal possession for scoring itself. By and large, however, the concept of controlling the puck more often in a game means there's less opportunity for it to be used against you. Unfortunately, people get lost in the numbers so much they lose the context of the whole thing: even teams that lose the possession battle on any given night can (and do) score goals. Teams with better possession tend to give up fewer goals, but they still do give them up.

What is important to remember about tracking possession is that in most cases, the split in any game is a difference of only a few minutes of attack time. Having the puck and attacking the net for say two more minutes a game is still a very significant thing, but winning the possession battle is not winning the game. I mention this because Anaheim is right in the middle of possession stats. This team doesn't drive the most play in all situations or games, with so many wins coming on the backs of strong goaltending and high shooting percentages.

Those aren't bad things, not at all. But goals tend to become harder to come by in the postseason, and shooting percentages tend to slip during that time. People favor stronger possession teams in the playoffs for this reason, as driving more play tends to create more opportunity for scoring chances. At the same time, puck possession is not the only thing - otherwise the Devils and Kings would be killing it in the standings along with the Blackhawks, Sharks, Bruins. Some teams have the puck a ton and just don't score, whereas teams with less time on attack score a lot more. There's still a degree of random chance in this sport that goes beyond attempts to control it.

As we gear up toward the final stretch, and as you begin to see more people doubt the Ducks chances of success, just remember: the playoffs are actually a smaller sample size than a season. Luck has more of an impact in shorter samples. And in longer samples, like 80-plus regular season games we've watched of this team since the start of 2013, the Ducks have been pretty good. Even that first round series last year was a good showing for the group. So just enjoy it. Enjoy that this team plays pretty good, fun hockey. The Ducks aren't Cup favorites. That's ok. They're still pretty good, and they score more goals than the Kings despite not being possession darlings.