The Olympic Watch: Switzerland and Sweden

Ducks goal-tending to make another appearance in the international tournament

Share All sharing options for: The Olympic Watch: Switzerland and Sweden

[Ed. Note: Written prior to the announcement of the Swiss Olympic team, including Jonas Hiller, and Luca Sbisa was placed on the "sidelist" due to injury. -CK]

The OTHER Red and White Team

This season has been a test for the injury-bitten Ducks (particularly on the blue line)...and while the Ducks have really answered the call and shown up for the task, one of the real gems is in net.

From the beginning of the season, the Ducks faced an embarrassment of riches in net. With Viktor Fasth's emergence last season, and the ensuing rise of the Great Dane Frederik Anderson, and the American hero/US World Juniors Champ John Gibson in the pipes down in Norfolk, the usual calls for "Trade Hiller" came in loads.... In the midst of all the cries for trades, Bruce Boudreau was set on keeping a tandem-starting-goal tending system in Anaheim. Why fix what is not broken? But the hockey gods would soon force the club to choose a single starter with Fasth going down with unexpected injuries. And Bruce's staunch trust in Jonas Hiller would pay off and end up producing a quiet, rising and possible (?!) star in talks regarding Vezina-like netminding.

Switzerland's preliminary roster for goaltending included: Jonas Hiller, Martin Gerber, Reto Berra, Tobias Stephan, and Lukas Fleuler. Other than Hiller, Switzerland has unspectacular but solid NHL veteran netminders in Martin Gerber (the bane of the 2006 Canadian team) and Reto Berra of the Calgary Flames. Conz, who currently plays for the Swiss league, may be a viable candidate in a few years, but the team will most likely go with more experienced goaltending in Sochi.

Jonas Hiller started in goal during the 2010 Vancouver Olympics when Switzerland finished in eighth. Despite the disappointing results, Hiller is not giving up his starting spot on the Swiss team easily. It is impossible that Hiller had not heard all the cries for his trade during the outset of the season, and he has done remarkably to prove his worth. He has answered all his doubters by standing on his head so many first periods on multiple nights just to keep the Ducks in the game. Jonas has a solid .911 save % with 2.42 GAA and currently riding on an 11 game win streak in consecutive starts. Not too shabby, eh?

No question about it. With his spectacular play during the first half of this 2013-14 season, I think it's safe to say we'll see another Duck starting in net, this time in the other red and white playing in Sochi come February.

Can't forget this guy, even though some of you may want to.... 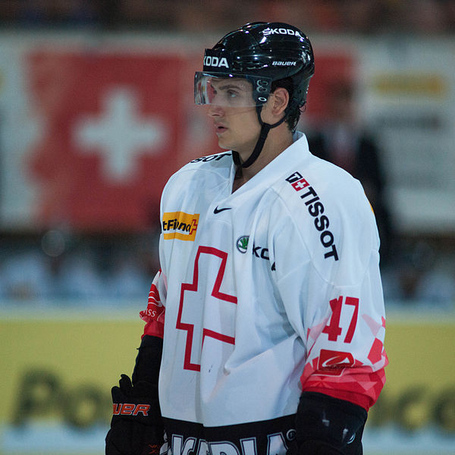 Another Duck that we cannot leave out of the Switzerland conversation is Luca Sbisa. Oh yeah, remember him? Yeah, he's Swiss too. And he was a lock for the Swiss blue line, that is until his injur(ies) sidelined him for most of the season (Insert your enthusiastic yay's here).

Switzerland is notably lacking in the offensive department and will have to depend on the strength along the blue line and spectacular netminding in order to survive Sochi. With the big solid NHL d-men like Mark Streit, Roman Josi, and Raphael Diaz, Switzerland will most likely look to escape unscathed through strong defensive play and low-scoring games.

Luca Sbisa missed out on the beginning of the season only to come back for a little bit before being sidelined on November 22, 2013 after fighting Tampa Bay Lightning's Radko Gudas (aka the a**hole that hit everyone's favorite Finn) with a torn tendon. He has since begun skating, but there hasn't been any real updates regarding his return from his injury. There is still more than a month left before the games in Sochi begin, so he could very well be back by then. With that being said, it really is up to Team Switzerland to officially name him on the roster despite his lack of appearance on the ice this 2013-14 season. A month is a long time and most likely, we will see Sbisa's name on Switzerland's official roster by the Olympic roster deadline.

How Swede it is in Net 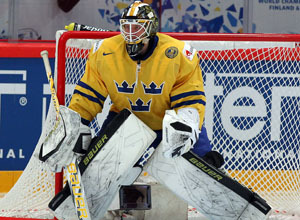 I decided to add a little glimpse of Sweden since there had been a possibility of seeing another Duck play as a part of this team. But alas, the injuries that hit the Ducks will also prevent Viktor Fasth from making his first Olympic appearance in Sochi.

Viktor Fasth, along with Henrik Lundqvist, Robin Lehner, and Jhonas Enroth were initially named to Sweden's National Team orientation roster. Lundqvist had the early nod as the starting netminder for Sweden. But after him, with all three other goalies having limited NHL experience, Fasth could have easily made his name known this season HAD he been healthy. Unfortunately, Fasth failed to put forth an impressive performance before being placed on injured reserve. And there has not been any recent updates regarding his injury status.

Like Team USA, one of the greatest strengths for Sweden is found in net. With the start of 2013-14 season, many teams saw the rise of back-up goaltending after several starting goalies went out with injuries. The emergence of Anders Lindback, Jacob Markstrom, and Jonas Gustavsson among those that were already named to the orientation roster, have made it much harder for Team Sweden to name their No. 2 and 3 goaltenders in Sochi. So sadly for you Fasth fans out there, 2014 will not be year for our Swede.

One more thing....I wanted to make a brief mention of another Swede on the Anaheim Club who has been gaining some notoriety after being part of one of the big blockbuster trades of the summer. I recently heard someone mention Jakob Silfverberg with regards to the final roster for Team Sweden at Sochi. As much as we would like to see another Duck make it onto international ice, with well-known NHL forwards like the Sedin twins, Backstrom, Landeskog, Zetterberg, and both Erikssons headlining the forwards, I highly doubt that there would be any room for consideration for Silfverberg. But anything is possible and maybe both Swedes will make it to the next winter Olympics in 2018.