Our enemies of the north...

Share All sharing options for: The Olympic Watch: O Canada

2010...both teams threw in all they had as the clock ticked down in sudden death overtime for the gold. The underdog Americans had come this far after Zach Parise dashed all Canadians' early hopes of gold by tying it with 24.4 seconds left. In the midst of all the Canadian flags and choruses of the Canadian anthem, the chosen son of hockey gods, Sidney Crosby allowed all of Canada to breathe a sigh of relief mixed with the groans of heartbreak from nation bordering south.

The grief, the agony...the loss of what could have been another miracle-like moment for Team USA...

What does 2014 Sochi hold for Team USA? Since this post is not about Team Red, White, and Blue--but actually about our enemy donning the Red and White Maple Leafs...can Team Canada repeat their gold run in Sochi?

I decided to save the best (enemy) for last....I began the Olympic Watch series with Team USA, and it is only appropriate that I end with Team Canada. The wretched, extremely deep and talented land of hockey giants and legends...Canada.

You have probably already seen or maybe even read the many articles analyzing who will be included on Team Canada for Sochi and who may be on the outside looking in, etc....But I'll just bring to the table what we in the AC community have to look forward to for Team Canada come February.

What can I really say about Team Canada that has not been said before? The team is just dripping with talent, high potential, and hot streaks. Looking briefly at the NHL league leaders, you will notice that CANADA leads across the board while dominating within each category. If there is any weakness in Canada, it would be in net (which is a pretty big weakness considering). With Luongo going down again most recently (thanks again to Mr. Dustin Brown...the man is single-handedly ruining the fortunes of Pacific Division rivals Sharks and Canucks as well a the Czech and Canadian national teams) goaltending may be the only Achilles heel of the 2010 Gold Medal Champs.

But in all other areas, Canada is sitting pretty with great players up and down the ice. So here we are at the eve of Team Canada unveiling their final roster. I am sure at this very moment, the committee is scrambling to shuffle in and out the last bubble names for the 2014 Sochi roster. Team Canada has a lot more to prove and a lot more to lose this coming February in Sochi.

Almost a week ago, all hell broke loose in the USA hockey world when former Duck Bobby Ryan was left off the Olympic roster (not to mention a bigger snub in leaving out d-man Keith Yandle). There are still lingering questions and resentment, no thanks to Brian Burke's comments, regarding the decision to keep the prolific goal-scorer off of Olympic ice this year. So imagine what it will be like after tomorrow's announcement of Hockey Canada's Olympic roster...prepare yourselves for some mob-like protests and national uproar. Despite the tremendous pool of talent, someone will be left out. *Cue mob with pitchforks and torches.*

With their ridiculous embarrassment of riches up and down the line, the committee has big decisions to make in the next twenty-four hours. What adds to the drama is Canada's recent failure to medal (again) in this past week's World Juniors. The Canadian talent pool remains the envy of all nations, but for the second consecutive time, Canada failed to come home with a medal. This brings up the question regarding the system of play and whether the rest of the world has finally caught up to the hockey giant and whether talent alone is enough to bring home a gold. 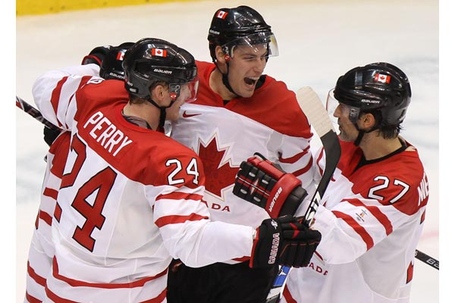 via www.windsorstar.com Three of the Ducks' arguably greatest players all wearing the dreaded maple leaf insignia on their chests....*sigh*

With the Canadian team boasting tremendous depth on both ends of the ice, the fact that Perry and Getzlaf sit comfortably waiting for the official announcement tomorrow it is quite a testament to the dominant play of the twins.

Corey Perry and Ryan Getzlaf are having the time of their lives this season playing for the high-flying Anaheim Ducks and making award conversations. Good thing they are Anaheim Ducks. Too bad they are Canadian. The Twins make up one of the most dangerous lines in the NHL, and will continue their chemistry in Sochi when they are officially named to Canada's Olympic roster.

At the start of the season and the initial naming of Canada's National Orientation Camp, there were questions whether either Duck would return to represent Canada in Sochi. But as soon as the NHL season began, the Ducks had 'unfinished business' to attend to, and the first half of the 2013-14 season solidified both Perry and Getzlaf's positions as second-line in Sochi.

Or will they be named second-line? While Perry and Getzlaf are sure locks for Team Canada, what line they play on is a question that remains to be answered. The fact that Getzlaf could be a third or fourth-line center speaks volumes to the depth that Canada boasts down the middle. This being said, there is absolutely no way the Canadian execs can split up the Twins...so whether it be second, third, or fourth, we will see the two Ducks skate together in perfect chemistry on international ice.

I recently heard some heated discussion regarding Team Canada's captaincy. While I highly doubt that the coveted "C" would go to anyone else but the "Chosen One" Sydney Crosby, hero of Team Canada 2010 and arch-nemesis of Team USA...amuse me for the moment and this about the other viable candidates on this deep team. When I ask this question, of course I am opening the door to the possibility of the Anaheim Ducks Captain Getzlaf of taking the reigns of the big guns.

Highly unlikely, I know, with the likes of NHL Poster Child Crosby, Captain Serious, and Thunder Thighs all on the team. But what if....I may be biased as a Ducks fan, but from the most third-person-objective-point-of-view I can take, I think Getzlaf deserves some consideration. For one, at one point Crosby was known around the league as being the biggest whiner and crybaby. Now now, we can't have a Captain being known for that can we? My case being, since last season, Ryan Getzlaf has made leaps and bounds with his leadership on and off the ice. You can just tell by his command of the puck as well as his presence on the ice. He's a guy you on the other team cannot ignore and cannot push around. But this isn't just me saying it...it shows up in his points, where he is currently tied in third with 48 points and is getting some serious Hart considerations. And when he gets angry, his determination knows no bounds.

I'll be honest...I just wanted an excuse to watch that game-winning goal again. It was Getzlaf's beauty of a pass that found Perry for a perfect 1.6 second shot. Dear lawd...this is only one line of Team Canada...ONE LINE. Think about the rest of the line-up.

Relentless...whether it's a pass or a snipe...Getzy's leadership would make Canada a more formidable team. Highly unlikely that anyone but Crosby, maybe Toews, will where the "C". But it is fun to imagine right?

Who knew that depth could be such a problem when choosing the final roster for Sochi? But it's a wonderful problem to have for Team Canada; and undoubtedly, whomever they do choose to go with, will most assuredly be contenders for the gold and thorns in Team USA's side for the time in Sochi. Tomorrow should be a field day for hockey media folks!

Lastly, I leave you good folks of the AC community with my photoshopped hopes of what the 2014 Sochi Medal count for the Ducks look like...USA USA USA! 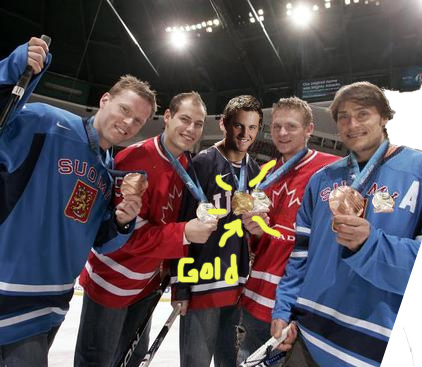 I didn't think it was necessary to strip Getzy of both the gold and his hair.