The Olympic Watch: And the final rosters are out!

Seven Ducks are flying out to Sochi this February!

Share All sharing options for: The Olympic Watch: And the final rosters are out!

After lots of last minute name shuffling, media fanfare, twitter rumblings, and tv announcements, the January 7th Olympic Roster deadline has arrived, and the final names are in. This coming 2014, there will be seven Anaheim Ducks representing their respective countries in Sochi, Russia. Some are old faces, returning for the sixth (!!!) time...while a few will be making their Olympic debut.

Here's a breakdown list of which Ducks will be skating in Sochi come February:

**See here for the full roster of all 12 Olympic hockey teams.

First things first...One name remains noticeably absent here. Saku Koivu. There had been a lot of press covering his and teammate's Selanne's "one last run at the Olympic gold" if you will, in the upcoming Sochi Olympics. So it did break my heart (and I'm sure most of us Koivu fans) to read that he withdrew his name from consideration because he did not feel fully complete in his recovery from his concussion he received back in October.

"I feel that in my case dreams and reality are conflicting," said Koivu in a statement. 'I would prefer to be replaced by a better-prepared player."

So does this mean that we will see Saku for four more years as an Anaheim Duck? I'm kidding, but not really. One can wish right?

What a class act. He wanted another try at the Olympics. F*** you Brandon Dubinsky.

One of the new faces that we will see in Sochi will be Anaheim Duck Sami Vatanen. This was not much of a surprise considering the lack of Finnish-born defensemen in the NHL. But as he has done well to step up to the role and answer the call of a club with an injury-depleted d-corps, Vatanen deserves an Olympic appearance for his native land. Sami doesn't get to see the playing time with the Anaheim that he so rightfully deserves due to his entry-level contract and the salary cap age, but he will definitely receive the love and attention skating for Team Finland in Sochi.

With Saku staying home and brother Mikko Koivu's pending ankle recovery, Team Finland may possibly see #8 wearing the "C" this (last) time around....Teemu Selanne. SIXTH Olympic Appearance. Is there anything else that can be said about the ageless wonder? [Ed. Note:  How about that he gets a chance to extend his lead as the highest scoring player in Olympic history?  -CK]

With his pleasant stellar showings this season, Jonas Hiller was a no-brainer as Team Switzerland's starting goaltender in Sochi. Hiller first made his Olympic appearance in Vancouver after finishing 1-3 with a 2.47 GAA and .918 SV% in five games. He was ranked third among all 2010 Olympic goaltenders with his 146 saves, including a 44-save effort vs. Canada. Hiller will be making his second Olympic appearance as the No.1 goaltender for Switzerland in Sochi.

Another name noticeably absent from the final roster that was present in Vancouver was Ducks defenseman Luca Sbisa. He has been sidelined for most of the season due to his injuries. As a result, he was placed on a "sidelist" for Switzerland.

Jakob Silfverberg--Oh how Swede it is!

Yeah, I know, that's not going to get old anytime soon. I salute you all who griped about me leaving off his name as potential candidates. You guys were right! And I have never been happier to eat my words.

Yes, he was a dark horse for a Swedish NHL veteran name-stacked team. But he made it. And it speaks volumes for his skating talent and goal-scoring potential. His breakout performance for the Anaheim Ducks caught the eye of Team Sweden. He will be skating alongside some big names and it'll be interesting with which players he will be placed.

Sweden is coming off a silver medal finish at World Juniors and is considered a formidable dark horse in Sochi. With a skilled arsenal of forwards and defensemen, and Lundqvist in net, it should be fun to see if Silfverberg will bring back hardware to Anaheim.

He will be making his Olympic debut in the blue and yellow in Sochi.

After all the wait...oh yeah, all the wait. This morning's announcement was like the Canadian version of Lebron's "The Decision"....At one point, we were all flung up our hands in exasperation and yelled at the Canadian media to just get on with it and release the damn roster.

Yeah, I think the entire hockey world called that those two. Did that really surprise anyone? The only question left is who on their tremendously stacked roster will skate with them.

Ok, now you guys may debate amongst yourselves who got the biggest snub from Team Canada. 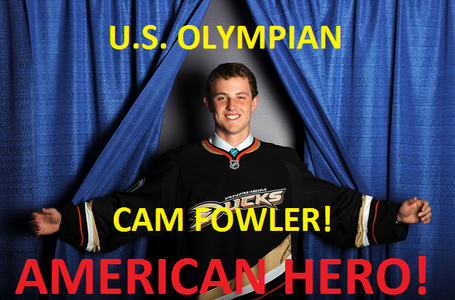 I am sure that I was not the only one anxiously waiting for the snowy end of the Winter Classic between the Toronto Maple Leafs and the Detroit Red Wing New Years Day. We all watched the game because we all just enjoy an incredibly good game of hockey...ok, wait, scratch the "good" part out since the snow just ruined that. We were really just watching to finally hear the one Duck be called out as part of the US Men's Olympic Hockey team for Sochi 2014. CAM FOWLER. And ladies and gents of the AC community...we WILL be seeing him don the red, white and blue this February.

At 22, he is the fourth youngest player to make Team USA since 1998 and is the fourth Duck chosen to participate in the Olympics (Guy Herbert, Bobby Ryan, Ryan Whitney). Along with Vatanen and Silfverberg, this will be Cam Fowler's first Olympic appearance, while being the fifth international appearance for Team USA.

It'll be fun seeing him pit against his fellow Ducks, most notably if Team USA plays against Team Canada, against his teammates Corey Perry and Ryan Getzlaf.

`So who will it be this time that brings the gold hardware???