The Evolution of the PP: Scoring Plays

Will the Anaheim Ducks have a better PP% this year? This bloggist certainly thinks so.

Share All sharing options for: The Evolution of the PP: Scoring Plays

I will take a PP improvement of 4%, personally. Scoring five-on-five (5v5) is important, and the playoffs are often decided in such situations. At the same time, a lethal PP can either give insurance to leads, cut deficits easier, or change the game plan of the opposition if they wish to avoid playing a man down.

As the season continues, I will check back in on this subject. For now, I want to take two PP goals the Ducks have scored and highlight the systemic positives we can see from them. There's a reason Anaheim has scored more frequently a man up, and while sample sizes will see that percentage normalize soon, there's reason enough to believe the team can stay top 10 in PP conversions.

I've mentioned it before in my previous posts, and this will perhaps show it better, but there's two important facets of a successful PP in today's NHL. The first is lateral puck movement, which having a strong "quarterback" can allow. The second is shots, shots, and more shots. So let's get into that "briefly" (I say, as I laugh about my brevity in print).

In prior seasons, the Ducks have relied on Ryan Getzlaf as the PP quarterback. His vision is excellent and his passing is second to very few players in the league. As such, and perhaps because he is defensively responsible as well, he's usually playing the point to best see the zone and play develop. But often this configuration left Getzlaf alone with the puck on the point. Long-time fans of Anaheim understand the problem with this right away: he doesn't think "shoot first" when he has the puck.

He's got a very hard shot, as years and years of team skills competitions for season ticket holders has revealed. But as I suggested in the summer, his finishing has never been world class, meaning he may only be a pretty average shooter accuracy-wise. When he can skate around goaltenders and "pass into the net," as it were, why bother bettering his shooting? So he typically doesn't do so.

Scouting an opposing PP is easier than scouting an entire team system because there's only so much variation out there, plus it is a scenario that is always starting from one of about three positions. It is as close to "set piece" play in hockey as we can get. Opposing penalty killers likely saw the threat of Getzlaf up top as a distributor and not as a shooter, which allowed them to focus on sealing off Anaheim's other shooters: Corey Perry in front of the net and, in earlier years, Teemu Selanne on the left side.

With options like those two in play, lacking a point shot wasn't a big deal. But the decline of Selanne's shot made it easier to seal the Ducks' only real shooting threat in Perry. It wasn't until the team freed Perry up away from the net (for Patrick Maroon) and added another quarterbacking type along the wall near the face-off dot in Mathieu Perreault that the PP began to look threatening again last season.

With the addition of Ryan Kesler, a shooter who plied his trade in the slot and left circle for the Vancouver Canucks last season, and Sami Vatanen, a world-class athlete and Time's Man of the Year (soon), on the PP now, the Ducks have found much better success. The 1-3-1 is in effect with this unit, usually with Vatanen on the point. Anaheim can do this because Vatanen has been an efficient quarterback as well as shooter from there. This has freed up Getzlaf to rove, in the same way that Maroon's net-front presence has allowed Perry to shoot more than try to cut goaltenders with his skateblades.

On the second PP unit, a 2-2-1 is being used. At the points, it has been Cam Fowler and Hampus Lindholm early on, both of whom are getting more comfortable shooting from the point. Fowler tends to attempt more shots from the point, whereas Lindholm shoots from everywhere, suggesting he roves a bit more than the former. The specific personnel down low has variated some to start the year, but Jakob Silfverberg, Devante Smith-Pelly, and newcomer William Karlsson have featured prominently thus far.

On each unit, despite formation difference, there's a solid system in play: move the puck laterally and get shots on net. PP1 has two natural shooters in Kesler and Perry, along with the viable point threat in Vatanen and goalie screen in Maroon. Getzlaf is there to facilitate everyone. PP2 has two point threats and two shooters in Silfverberg and Karlsson.

The results have been promising. Here are two goals from each unit. A quick word here: because these charts have so many touches, some of the touches aren't precisely where they probably were in real play. Much of that is to show clear and clean lines and not to misrepresent data. (This is also more evident on the second play charted.)

The first chart is from the third goal scored against the Pittsburgh Penguins. First, the video. 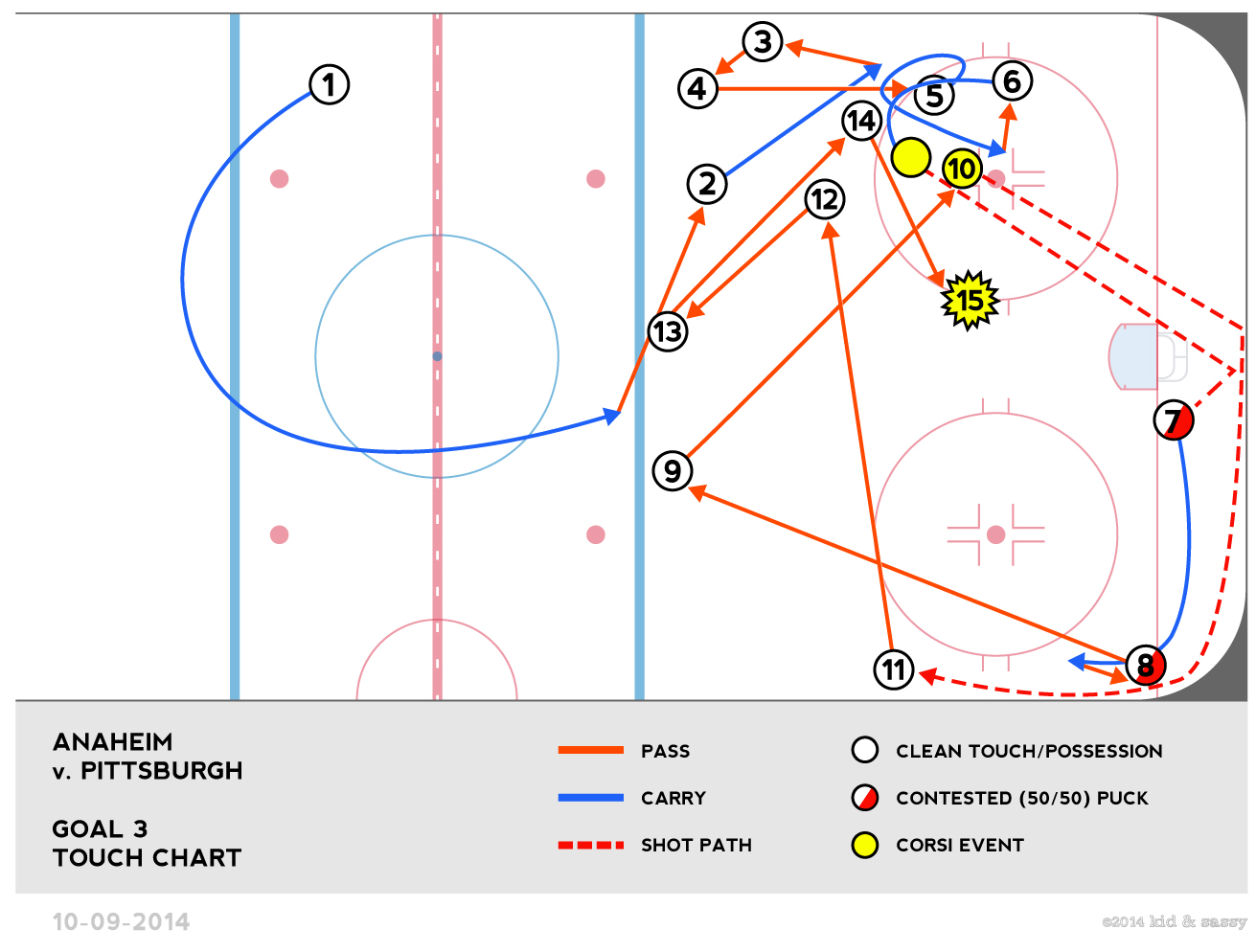 To make this easier, here's the first part of the play. 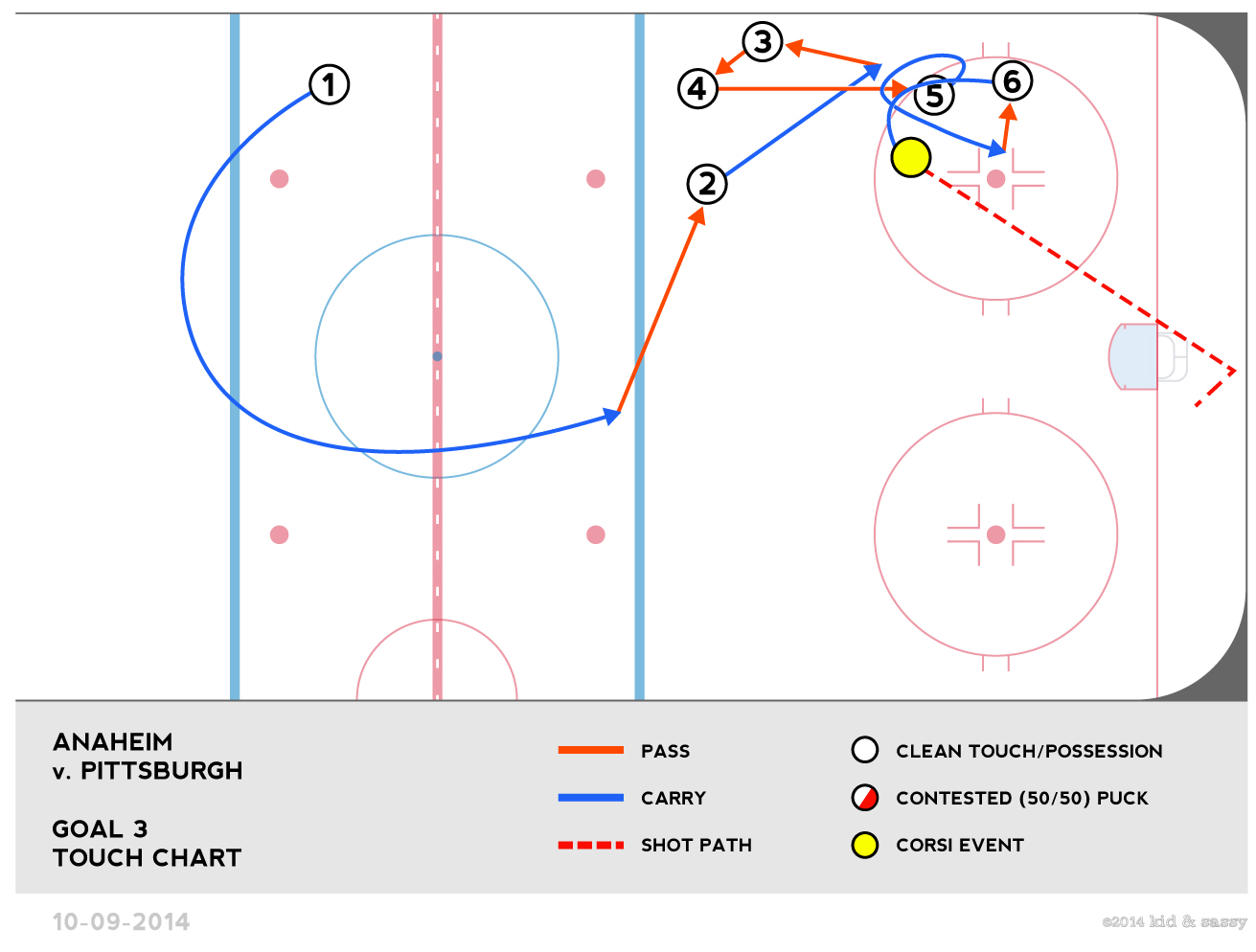 1 Vatanen retrieves the puck and records a controlled entry (a pass to teammate)
2 Kesler is herded along the left wall, hands off
3 Perry is checked off puck but shields it
4 Vatanen recovers clean possession, passes
5 Perry circles and drives toward net (sealed off), hands off
6 Kesler takes, circles, drives, and shoots (wide) 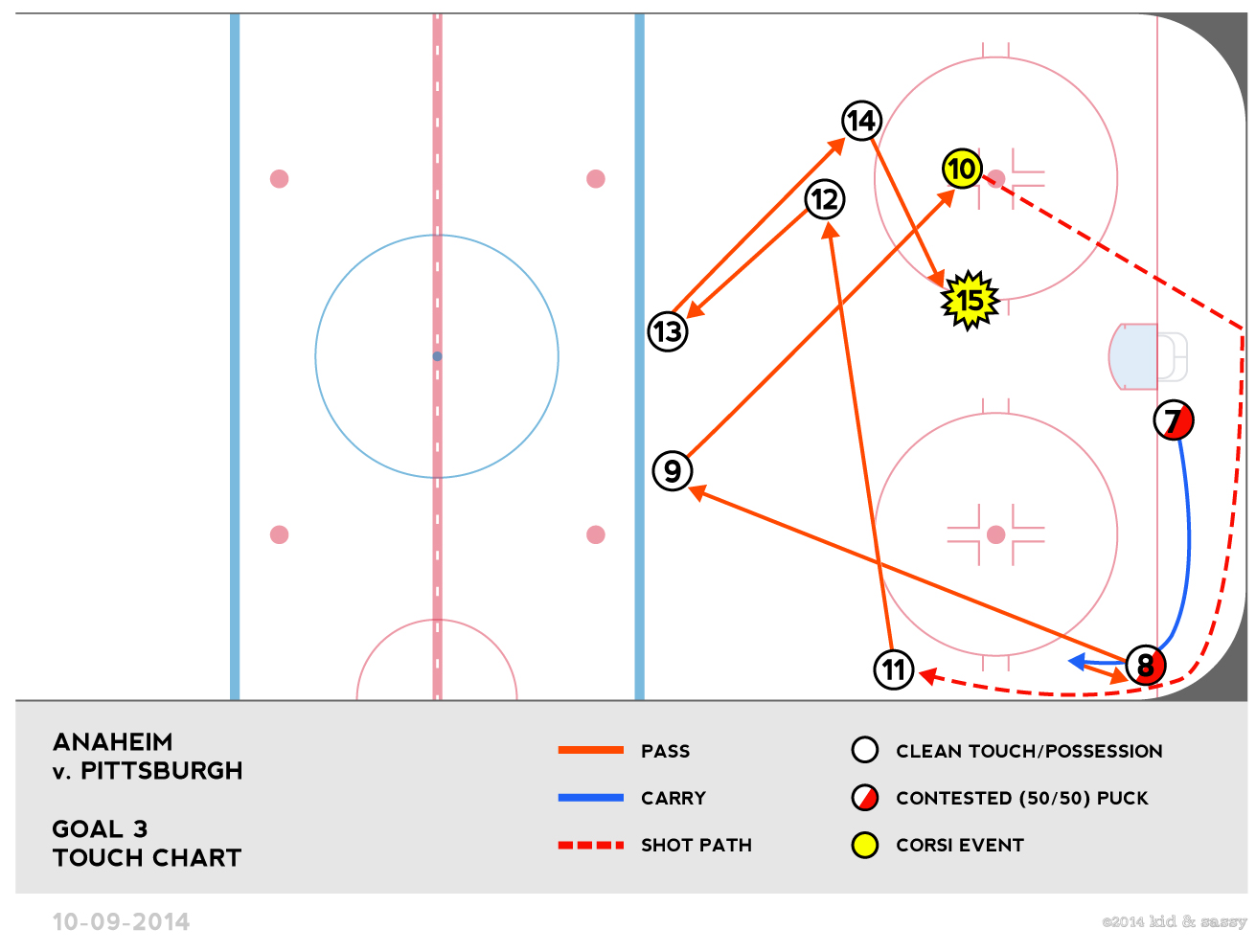 I broke the chart into two phases because of all the puck movement. The first part of the overall play takes place down the left side. Vatanen, Kesler, and Perry gain and keep entry into the zone and even work the puck into a decent-ish shot. Notice the shot location though: it isn't as ideal as Kesler would want. If you trace both Perry's and Kesler's circling before the shot at touch six, you can see both are working to get as close to the slot as possible. Goal scorers are always going to drift closer to that area.

The second part of the play features stronger wall work on the right side from two power forwards in Getzlaf and Maroon. Getzlaf retrieves two wide shots that are instrumental in keeping the play going. Maroon's board play after the first shot is tremendous, and the fact that he ends up getting it back to the point cleanly is the backbone of the sequence. That allows another quick succession of touches resulting in a shot from the slot, the first true scoring chance in the sequence.

Getzlaf's touch at #11 is pretty cool: such is his vision that instead of getting the puck and dishing it off immediately, he holds it for a moment. This drew the PKer toward him, opening space in the slot for Perry to slide into. From there, Vatanen and Kesler combine to exploit that. How any team lets Perry enter the slot unchecked is beyond me: nearly all of his goals are scored immediately in front of the net or from the face-off dots in.

Most of this 15-touch PP takes place on the left side, in an overload formation. But instead of getting trapped down low and into less useful cycling against PKers, the decisions made by Vatanen (quarterbacking the unit) allowed for two shot attempts before the goal was scored. When Getzlaf retrieved Kesler's second missed shot on the right side, that overload on the left gave him ample space to draw in his player, zip a puck back across (good lateral movement), and set up the eventual goal in the slot.

Now here's a goal from the evolving second PP unit. It is William Karlsson's first goal, which many of you remember. The Buffalo Sabres player at the end who decks Karlsson post-goal is the player returning from the penalty box. So yes, this is technically an EV goal, but the rest of the play is on the man-advantage.

Now here is the scoring chart, in all its 25-touch glory (and yes this was difficult to track). 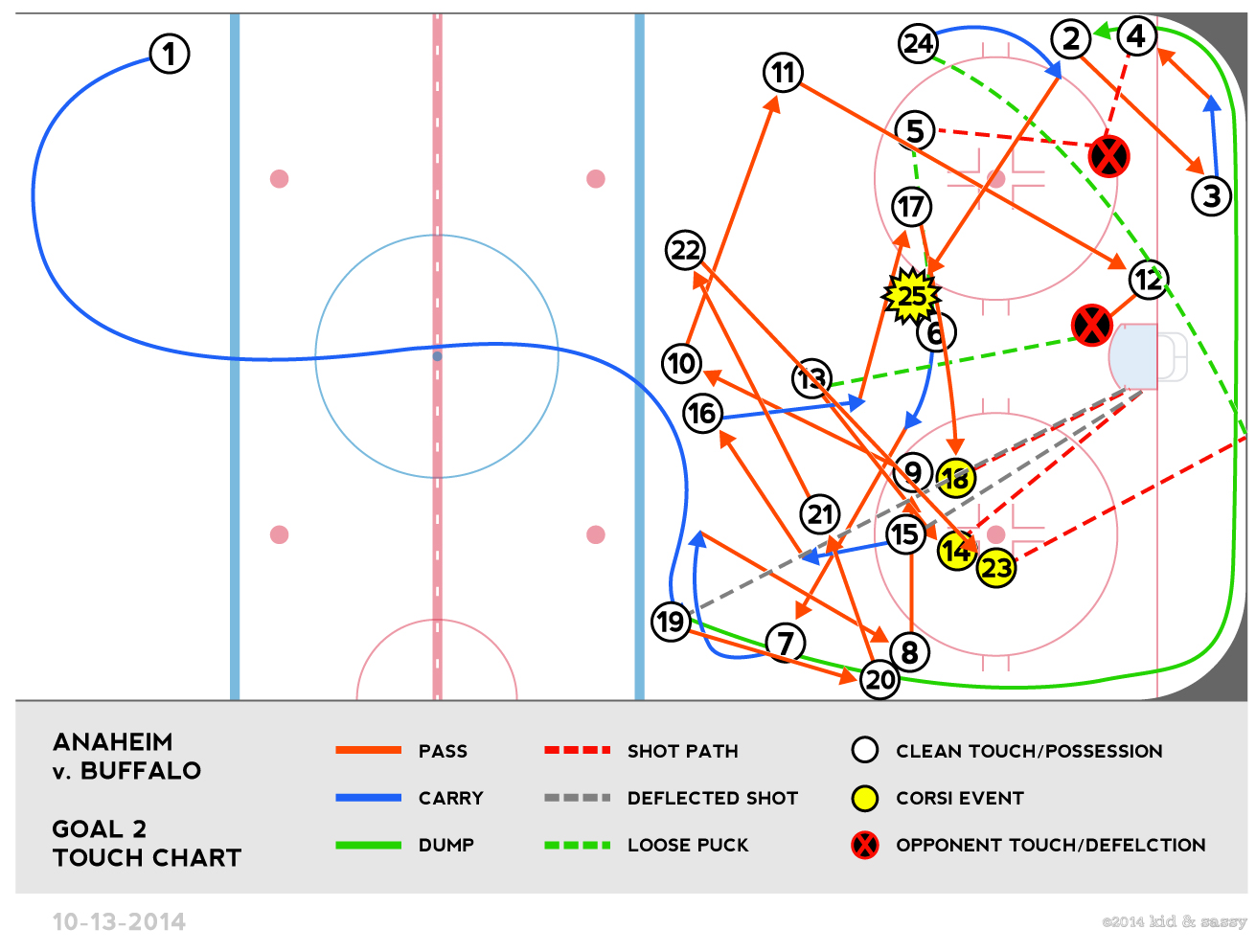 Where to begin. Let's go with touches #1 through #14, or the first shot on goal. 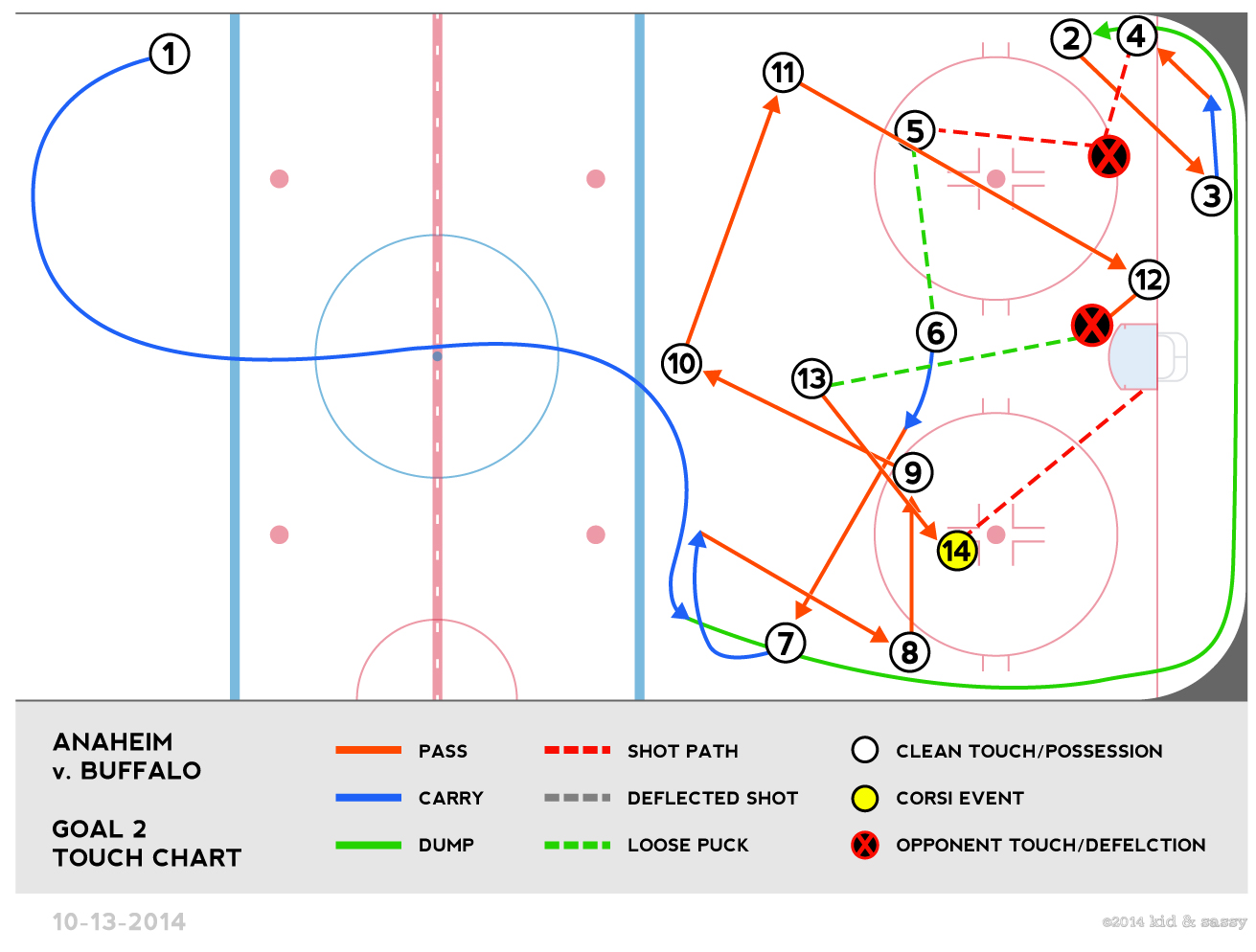 1 Vatanen the little engine gets the puck and enters the zone with control, no big deal
2 Smith-Pelly retrieves the hard dump-around and hands off
3 Silfverberg tries to take it back up but Devo is blocking his path so oops, passes
4 Smith-Pelly attempts to pass it into the slot, which deflects out high
5 Smith-Pelly has decided to leave his corner, pushing the deflected puck into the middle
6 Karlsson retrieves the puck, controls it, passes
7 Fowler carries into space, passes
8 Karlsson passes
9 Silfverberg passes
10 Fowler passes
11 Lindholm passes
12 Smith-Pelly either attempts to jam puck in net or pass puck in slot (looked like a pass)
13 Fowler recovers the loose puck, passes
14 Karlsson shoots from just outside the prime scoring area (saved)

That's a lot of lateral puck movement that results in a shot. This is exactly what coaches want to see, regardless of conversion. The Ducks' were fortunate to win some of the puck battles caused by Smith-Pelly's largely unimpressive role on this unit. It seems evident to me Boudreau wants him to be Maroon Jr. in what he's doing, and while he seems capable of doing that at evens, I don't know if Devo has the natural "puck awareness" Maroon has shown. Yet. Always a "yet" thing. 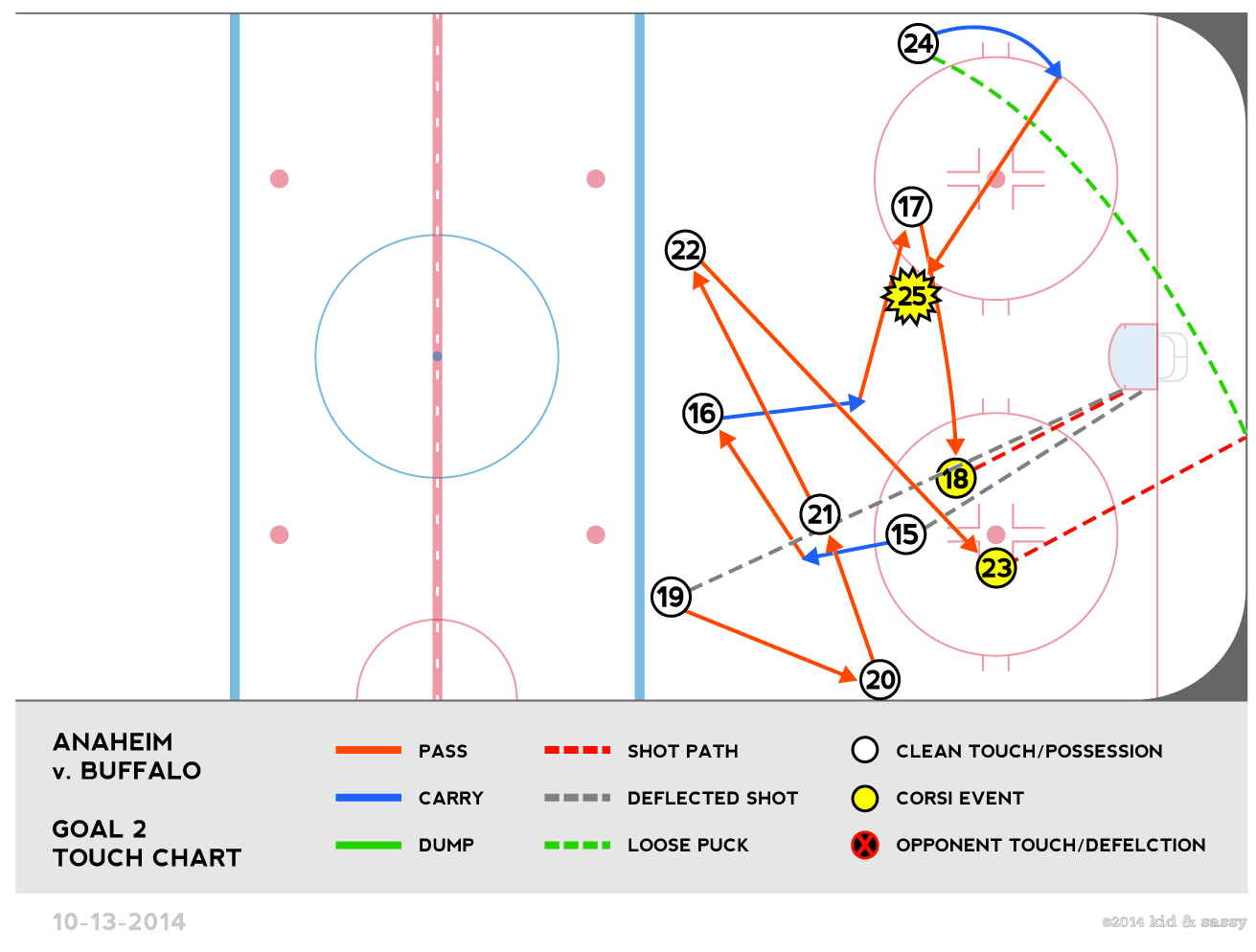 15 Karlsson recovers his own shot and is tripped up heading back to the point, but still passes
16 Fowler challenges the slot and passes
17 Lindholm passes
18 Karlsson shoots from the slot (saved)
19 Fowler keeps the zone, passes
20 Karlsson one-touch passes
21 Silfverberg one-touch passes
22 Lindholm cross-ice passes
23 Karlsson shoots from outside scoring area (wide)
24 Lindholm recovers the puck, passes into slot
25 Karlsson "settles" puck (steps on it) before scoring

Again: look at the lateral movement there, from which three additional shot attempts were made. Lacking the team's very best playmakers and/or finishers, this is pretty much the essence of a good PP on display. What individual skill can't break down (ie, Kesler and Perry being able to edge closer and closer to goal through their unique ability to read play or Getzlaf being able to draw a player to him before making an impossible-to-most pass cross-ice), systemic play certainly can.

The second half of this sequence features four players basically just executing correctly and not anything overly creative. Fowler was excellent in holding pucks, trying to create holes, and distributing the puck. Silfverberg and Lindholm manned their positions well, moving the puck between Fowler and Karlsson and the shots on goal. And Karlsson generated four attempts in one stint on this PP, which is very good production that was rewarded in the end.

Both of these PPs show the sort of puck movement and continual shot generation needed to make a successful 5v4 attack. Both goals have their own wrinkles specific to them, the first with more of an overload on the left side and the second with a few lucky bounces off Smith-Pelly miscues. But both goals also feature multiple shots born from the puck movement preceding them. This is important when considering conversion percentages: attempting more shots per PP means more chances for each one to be successful. Shooting more will come from better puck movement overall. And that's how the Ducks can ride a hotter PP throughout the year.