Do you ever want to just be a fan of hockey again and not fret about all this statistics stuff? Don't read this post! (but seriously, read it twice)

Share All sharing options for: Kid Ish and the Great Scoring Project

The Anaheim Ducks were an interesting team last year in that they had massive success on middling possession metrics. The team isn't the first or the last to win with some lucky percentages, but 2013-14 was the second consecutive season in which shots for, shot attempts for, goals for, and shooting percentages were skewed in some respects. A team without this much measured possession shouldn't be scoring this many goals (or keeping as many goals off the board). For this reason, people have been waiting for Anaheim to come down since Boudreau's first lockout-shortened season, and as of yet it hasn't happened.

I looked deeper into the Ducks' play in 2012-13 and 2013-14 and have written plenty about my thoughts, opinions, findings. For 2014-15, I want to go about this analysis as the games occur instead of in hindsight. It seems to me, with two seasons of consistent overachievement relative to statistical measures, there's perhaps more than just luck or coincidence.

From this thought was born my season-long project: Ducks' scoring plays tracking. I'm taking every single goal and breaking it down beyond the basic highlight, from first controlled touch to goal, and basically charting it alongside interesting or relevant data. Sounds neat, right? It is, and you'll see more in a second.

I want to disclose some things though. If I had more resources at my disposal, as well as more time, I would do this for a number of plays and not just the successful ones. The plays ending in goals are the times when it all "works" for a team, and there's far more plays when it doesn't work at all. Again, this is a resource and time thing. But also, as you'll see below, there's plenty of information in each successful play to make this a worthwhile pursuit in terms of understanding how a team like Anaheim wins.

Let's get into it. This is the first goal of the Ducks at Kings game on September 25 at Staples. Here's the video:

The immediate takeaway from that play is that Hampus Lindholm is really good at hockey. And yes, he is. But Emerson Etem gets a tally on this play because he did most of the heavy lifting earlier in the shift, which gets ignored in the highlight (doesn't go back far enough) and/or by most people, who aren't rewatching the goal play to break it down.

This is where my tracking project comes in. To get some help showing it, my wife (a creative director who is excellent at visualizations) is creating visuals for my findings by making what you'll see below from my sketches. Here's the very first (and admittedly rough) drafts of the stuff we've put together. As the season goes on, and as our process improves, this stuff is going to get a lot deeper.

First, the relevant details pertaining to this goal. It is eight touches (two contested) from start to finish, or 25 seconds from possession to goal; from the point of zone entry, it is a 20-second shift with one shot attempt (the goal itself) in which all five players touch the puck at some point. The zone entry type was controlled (puck carried in) along the right wall with a curl-and-dump into the right corner, where it was retrieved by the weak-side forechecking winger.

A quick note: contested touches. These are important in my analysis, because it captures precisely everything that management, coaches, and media types harp on when saying "stats aren't everything! WHAT ABOUT HEART, IS THERE A STAT FOR THAT?" (It's usually a heartbeat, but never mind.)

An eight-touch scoring play with 20 seconds of zone time is on the rarer side, to start with. That's a lot of time spent in the zone! In looking at five goals thus far (through both Kings preseason televised games), it is the highest amount of controlled touches and zone time on any of them. Furthermore, there's 20 seconds of offensive zone time with only the one measured shot attempt, the goal, which is interesting.

Just think: if the Ducks routinely score on cycle plays with very little shot attempts taken between initial possession and the goal, it could explain some of why they have low shot generation totals team-wide. (That's why I'm doing this!)

Using just this one goal (as well as some supporting evidence from another goal in this game), I can say that the longer cycle without shot attempt is likely by design. There aren't many set plays in hockey except off face-offs and on special teams. The flow of the game doesn't really allow for many other stops-starts, so coaches establish systemic preferences with aims of creating pockets of order from what's otherwise chaos. Defensive marking and the forecheck are two such areas. 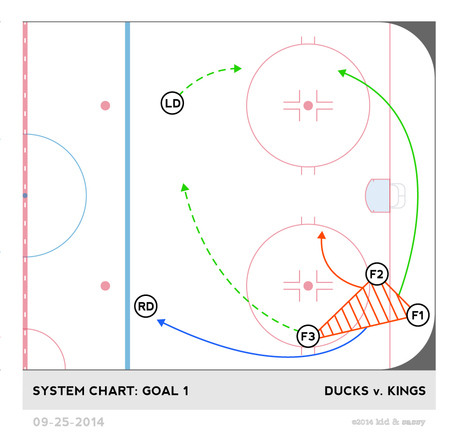 On this play, the Ducks employ a low wall cycle that overloads the right side. The aim of this is to work the puck to the front of the net (red arrow). If that option is taken away, as it often is, the relief outlet is to hard-dump the puck along the wall to the left (or weak) side, with that player pinching in (green arrow). In that event, the highest forward will cover his spot until they can trade again. A third option, pushing the puck back to the strong-side point also exists (blue arrow). Depending on the situation, that's the more risky outlet because if it is turned over, the puck is that much closer to the neutral zone and a speedy counterattack. The weak-side outlet would at least force the opposing team to go the entire length of the ice.

With the personnel on the ice, I suspect the attack will nearly always go down the right side of the ice. The defensive pairing is Lindholm (left) and Francois Beauchemin (right). Lindholm figures to be a safer pinching defenseman with his mobility, allowing Beauchemin to get back quicker and with less effort in the event of a turnover. 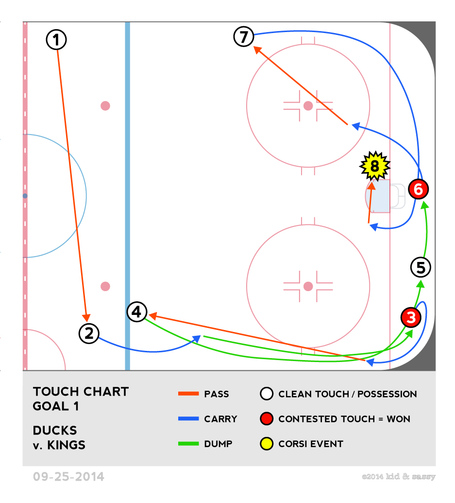 Here is the full sequence:
1. Lindholm retrieves puck in NZ, sends cross-ice pass to...
2. Andrew Cogliano along right wall, who enters the zone with control and dumps into the corner.
3. Etem retrieves and fights off Kings checking, passes the puck back to...
4. Beauchemin, who elects to immediately play the puck back into the crowd along the near-side.
5. Rakell escorts the puck behind the net and assists in a puck battle to free puck for...
6. Cogliano behind the net, who skates it out into space and hands off to...
7. Lindholm, who wheels the puck with individual skill into a wrap around pass to...
8. Etem, goal.

The key play in this entire sequence is the puck retrieval and ensuing battle to win it free by Etem, which extends the play to the point. While Beauchemin could have elected to shoot the puck or switch play cross-ice from there, there's clearly a bit of coaching preference here. The Ducks' point men frequently bypass either of these options in favor of soft or hard dump-ins back into the zone. If any of you read Justin Bourne's piece the other day, you may agree to recognize it as the sort of conservative (safe) play I've also noticed (and mentioned) before.

I will be tracking every single [televised] goal the Ducks score throughout this season. Depending on the trends I see or on what a particular goal speaks to in regards to this team's systems, I will share the charts and break down the plays. If necessary, I may even turn some attention to goals against at various points! Eventually, this will allow me to have a sort of Ducks scoring plays database that I hope gives all of us some insight as to how Anaheim wins despite its weaker-than-elite possession metrics.