This post is about Jakob Silfverberg. He is the master of the shootout. Pizza is his favorite offseason food (probably)!

Share All sharing options for: The Silfver Lining: Scoring Plays

It has been a while, but I am back with some of our charts for your viewing pleasure. Work deadlines were fun!

Since we are busy making sketches and charts behind the scenes, I'm easing back into the publishing part with a more focused post on Jakob Silfverberg. As most of you know, he's one of my favorite players. As most of you also know, he has three goals and 12 points so far, which may or may not qualify as good or bad in your opinions. But as a third year, 24-year-old player, I am ok with his numbers.

In a second, I will get into some fancies. But let's start with some funsies. (I think that word is great.)

I sketched up a pretty great cycle goal by Andrew Cogliano that Silfverberg has the primary assist on. Sass has turned it into something pretty, and here we are. It is stuff like this that I want to call attention to when tracking each goal. While three goals and nine assists may not impress some of you, not all of them are equal. And we can literally show you! 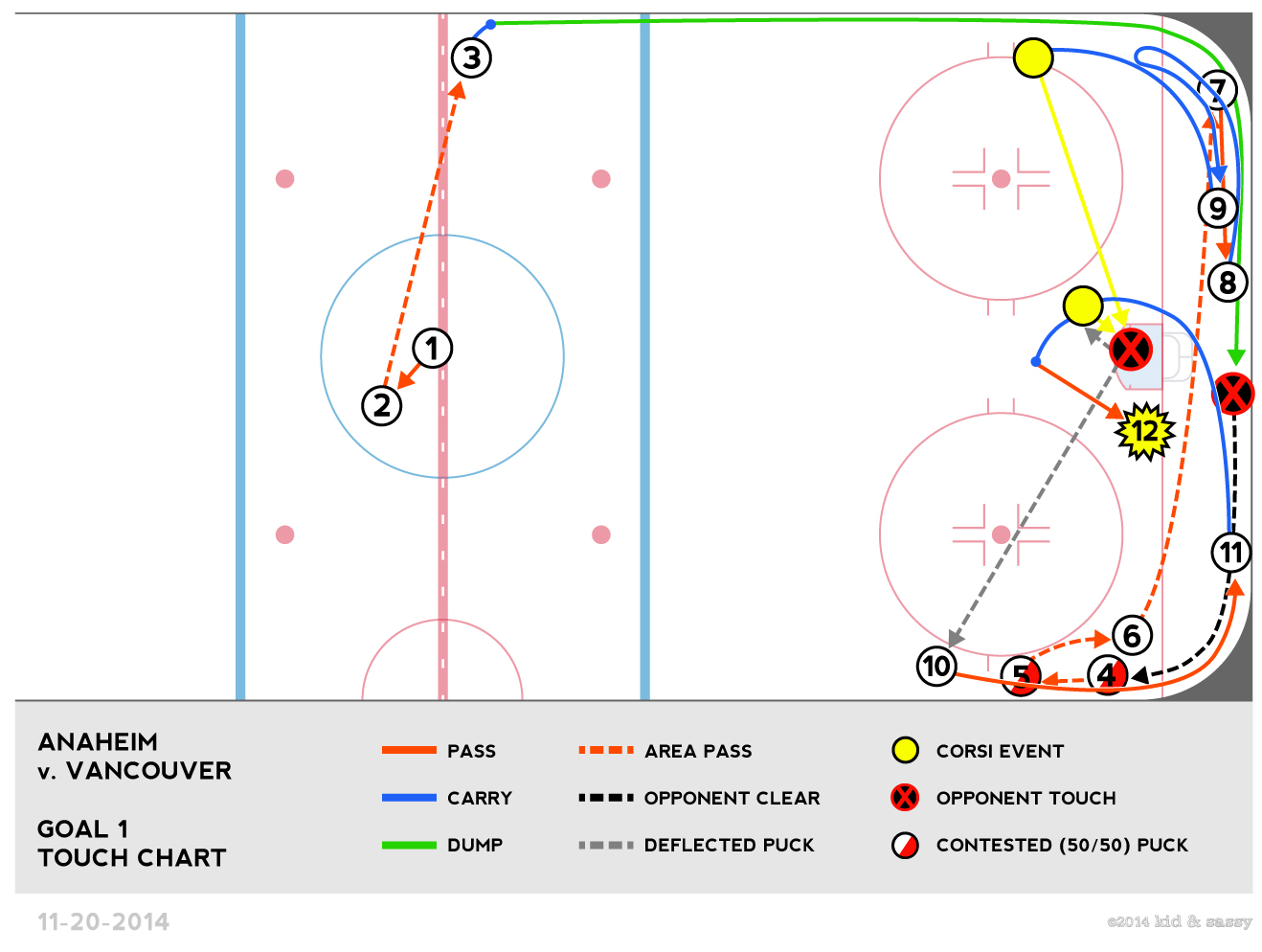 Now a quick note: Nate Thompson was credited with an assist on the goal. We do not indicate where he touched on the puck before the goal. It appears he was given credit for what was essentially him knocking a checker off Silfverberg, who as far as I could discern (with multiple reviews and zooming) never lost the puck.

In this instance, I noted some fancies for the goal: the sequence yielded three shot attempts over approximately 36 seconds. That's an excellent shift, especially since it wasn't one taken by the top line. The significant time moments are as follows:
1. Cogliano zone entry (uncontrolled) at 19:55
2. Silfverberg recovers clear attempt at 19:51
3. Cogliano (touch 7) passes at 19:46
4. Thompson shot on goal at 19:38
5. Cogliano scores at 19:24

Silfverberg's "assist" touch on the puck is the key here, as he made the play. Here is that run-down:
1. Silfverberg receives pass at 19:33
2. Silfverberg wins contested puck at 19:29 (where Thompson earns his assist)
3. Silfverberg shoots (blocked) at 19:26
4. Silfverberg recovers block and passes at 19:25

So you can see, this is some pretty great work by the Silfver Surfer here. During an approximate 36-second cycle play, he has the most touches on the puck. Furthermore, he has the most significant touches in terms of plays made that create the goal. On the scorer's sheet, this assist looks like any other; my purpose for showing this specific touch chart  is to illustrate that this assist is a created goal for Silfverberg, which isn't exactly the same as "last touch before goal scorer" that many assists can be. So now, some FANCIES.

The Ducks want Silfverberg to eventually contribute more steadily to its offense. At the moment, however, he's been used in a primarily checking role (based on teammates). He has played the most minutes with Cogliano, another solid checker for Boudreau. In order of time together, Silfverberg has played with Ryan Kesler (two-way), Thompson (checking), and William Karlsson (scoring), which gives you an idea of his usage. 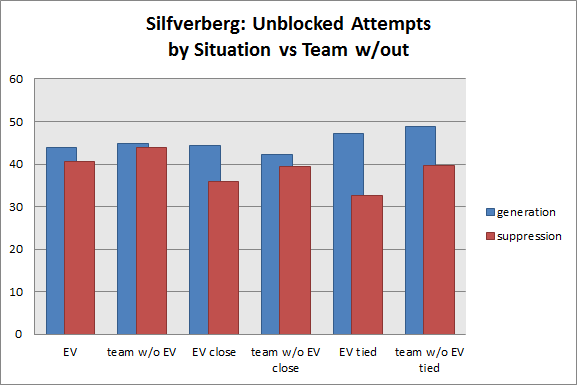 You can see why Boudreau instinctively uses him as a checker with Kesler or Thompson, accordingly. But I said before the team "clearly" wants him to add more production. I say this based on his zone starts so far. He's being given more offensive starts than not, which is part the coach calling his line's numbers (like when put with Kesler) and part his line earning the starts by turning the play there to begin with. 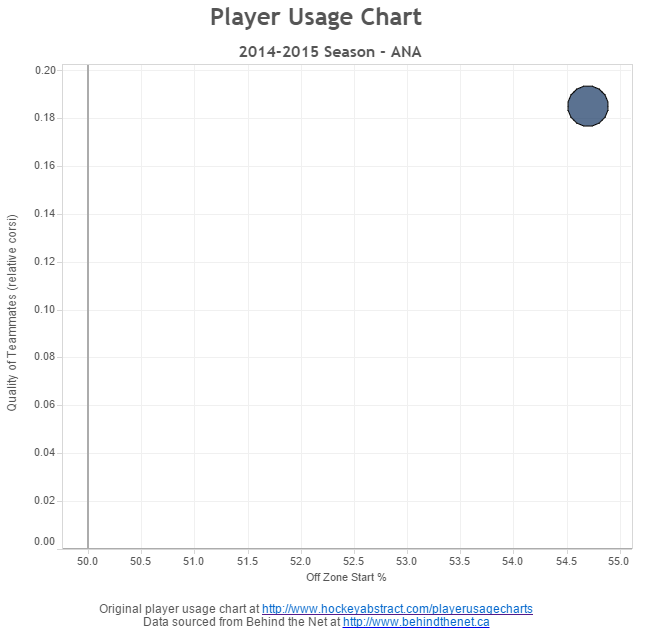 Perhaps due to more offensive zone starts, his relative Corsi number (all shot attempts relative to his teammates) is super! [Ed. Note:  As indicated by the dark blue color of the circle on the usage chart, -CK] In fact, he and Matt Beleskey (Matty Nice) have higher relative numbers than Ryan Getzlaf and Corey Perry. To some extent, this is expected as the latter two elite players tend to start more shifts in the defensive zone. Nonetheless, Silfverberg is rewarding his coach with strong possession play in these favorable starts.

He's just not rewarding his coach with the production. What's up with that!? Well, the very short of it is this: he's been unlucky. Silfverberg's currently shooting at between 4% or 5% depending on the game state. That's lower than the average, so we can easily expect it to regress somewhat if he continues firing away. And a look at his underlying stats show he will.

But systemically, there are ways the Ducks can get him going. Here's a chart showing all of his shootout attempts in the same frame. 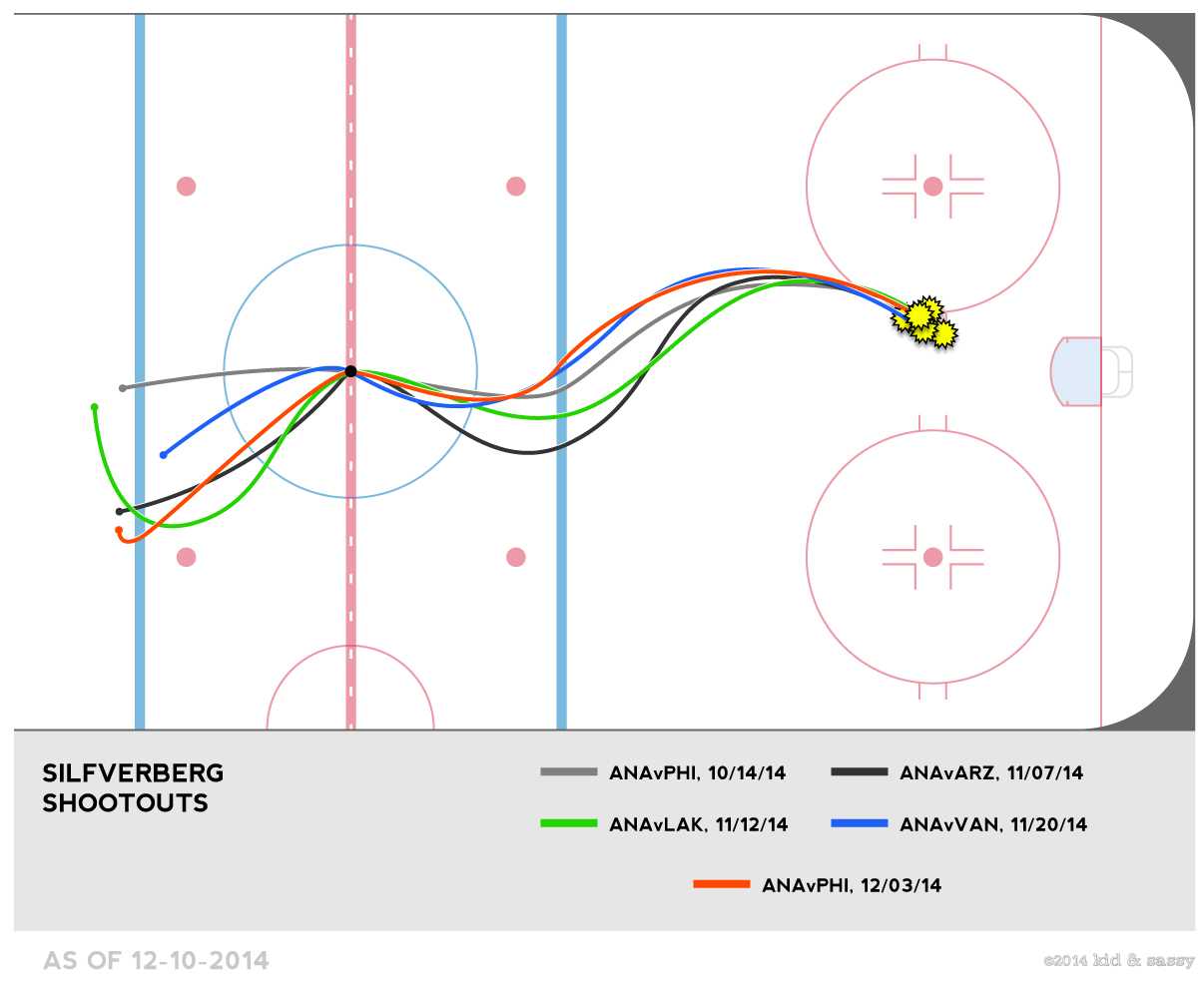 What does this mean, Kid? How can the team help him generate more points? I would suggest playing him from the left side more consistently! As his tendency indicates, he's most comfortable firing after approaching from the left side of the ice. When he takes a shootout attempt, he's not thinking about what he's going to do to get there. He knows his route to his spot, and he knows he's going to shoot in the slot. He erases noise and turns every attempt into his shot versus the goalie's ability to stop it. And he's very successful!

Now look at this shot chart. As it stands right now, he's literally everywhere in the offensive zone. 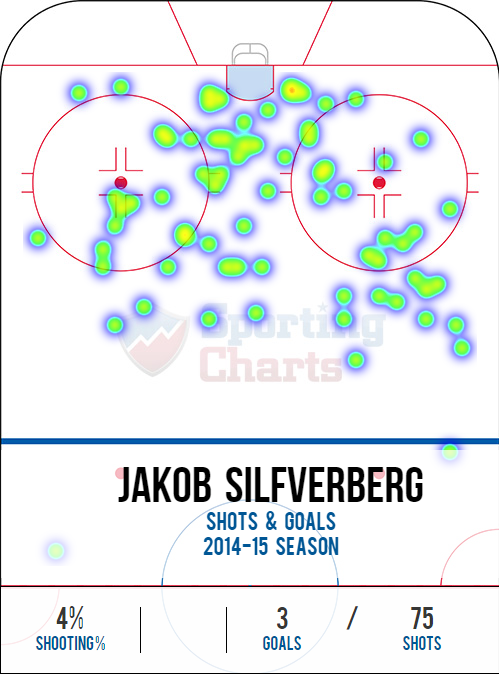 I want to see Silfverberg on the left side far more often. I want the heat map of shots taken to be loaded with HOT HOT HEAT from that side. If his natural tendency is to approach the net from that side with the puck loaded on his right-side shot, let him use it there. Perhaps it would improve his currently dismal shooting percentage and give the team the boost in secondary production it will need without Perry in the lineup.