The Rush of Victory: Scoring Plays

A take on the December 3rd, Flyers at Ducks game.

Share All sharing options for: The Rush of Victory: Scoring Plays

I want to take a look at a specific game in this week's post. On December 3, 2014, the Anaheim Ducks played a pretty good game against the Philadelphia Flyers. I say "pretty good" and not "great," because the team's defending in the last five minutes was poor. (This team's defending has been a problem on the year.)

Obviously, if the Ducks seal this game in regulation, our hindsight view of it is probably a notch higher. As it stands, we should view this game positively despite the lapse in consistency during the last five minutes. This is a game in which the Ducks not only won after trailing but scored three goals at even strength and one on the power play while also carrying most of the play in terms of possession.

But the topper to that was the nature of the goals scored: Anaheim scored two goals off the rush and one goal from a turnover. When coupled with the superior possession play through two periods, the directness of the team's attack on the rush is impressive. I doubt I'm the only one who gets frustrated watching Anaheim gain the zone and cycle it around for a good amount of time, only to turn it over or lose it before getting any real chance at scoring. Not only does that tend to deflate shot attempts for, it also limits the offensive ability of some of the quicker players on the roster.

Now, before we get to the scoring charts, let's look at the game's possession chart (all shot attempts at even strength), courtesy of hockeystats.ca. 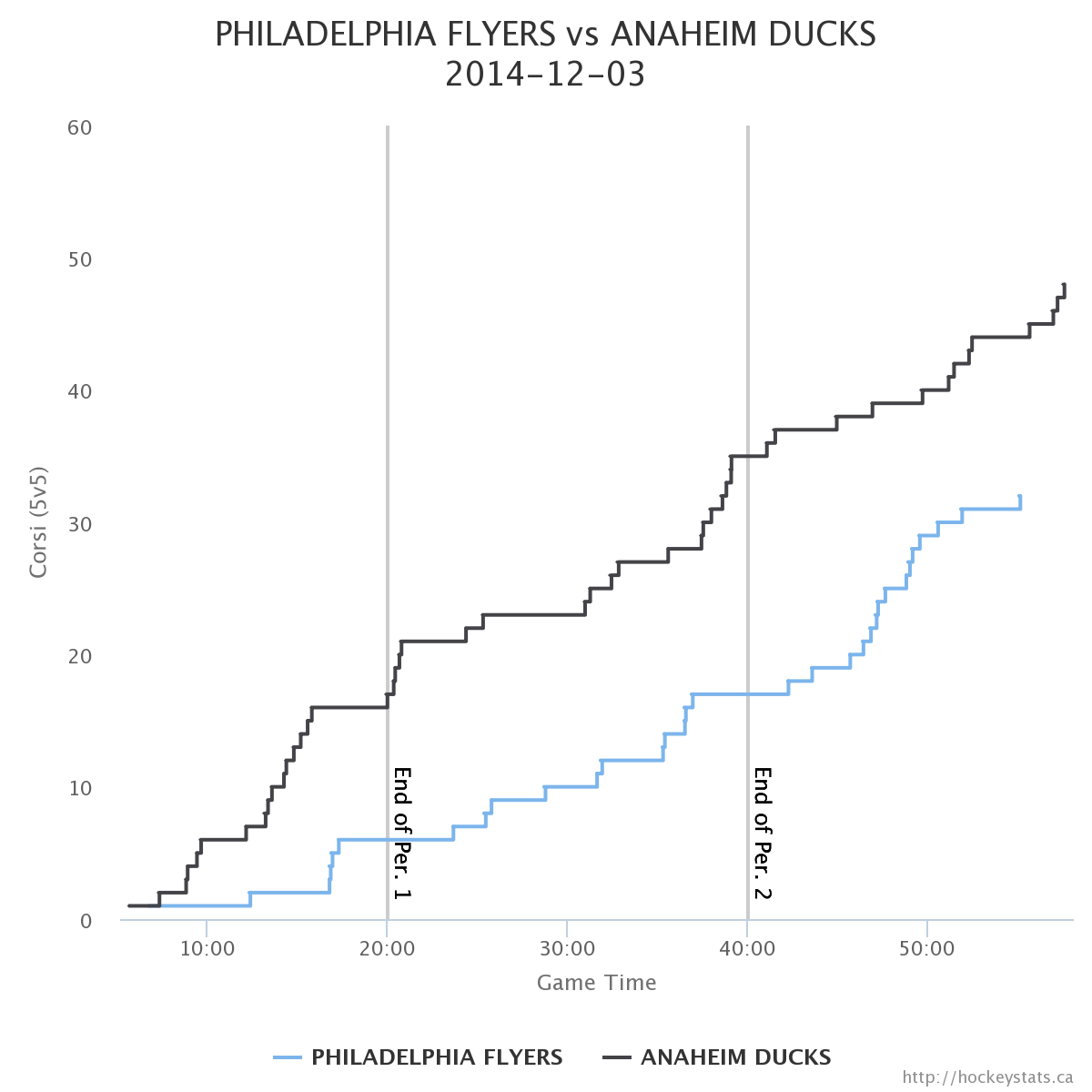 In the first period, the Ducks took 73.9% of all shot attempts. In the second period, when the scoring started up, Anaheim took 61.7% of all attempts. The score after two periods was tied at three goals apiece, but the Ducks' collective 67.8% possession came with three goals at evens. The Flyers only had two even strength goals.

Even strength goals are the currency of the league, really. Special teams play is important in every teams' success throughout the year, of course. Having a lethal power play can, like the Flyers in this game, make up a lot of ground that even strength scoring can't. But the playoffs are a game played far more at even strength, so the strength of attack at evens is an important measure.

The last period of the game was tougher, with the Ducks only taking 36.1% of all shot attempts. Much of this was due to the Flyers opening up and creating more "events" (shots for or against, hits, blocks, etc.) with an aggressive forecheck. As we know, Anaheim struggles against high pressure, aggressive forechecking, which Philadelphia can sustain on the strength of its forward group. This is more of an issue with zone exits than actual team defense per se, but that's a different topic.

However, the 60-minute possession edge went decidedly to the Ducks at 57.2% of all shots attempted. This is what happens when a team wins two periods by decided margins. And overall (including overtime), Anaheim closed the night with 52.7% of all shots attempted. The following chart illustrates the Ducks' edge despite slowing down at the end, courtesy of naturalstattrick.com.

The reason I'm pretty high on rush goals is because they tend to come from players working the puck up quickly. (They also tend to involve a lot of positive skilled play, which I love.) I've said it a lot: speed is the name of the game now. Size is great, but the sport is moving away from the dump-and-chase, grind-grind-grind style of the 1990s and aughts. The ice has opened up, players fly through the zone, and smaller, puck-moving defensemen like Sami Vatanen are becoming key pieces to teams.

That Vatanen features in a goal in this game is great. But more than just that, the Ducks playing a largely solid possession game along with two goals coming from good, quick puck movement is good. The third goal coming off a turnover is also fantastic, as it comes from positive pressure on opposing possession in the offensive zone. This is the type of game the team can, and should, play more frequently.

Now, to the goals! 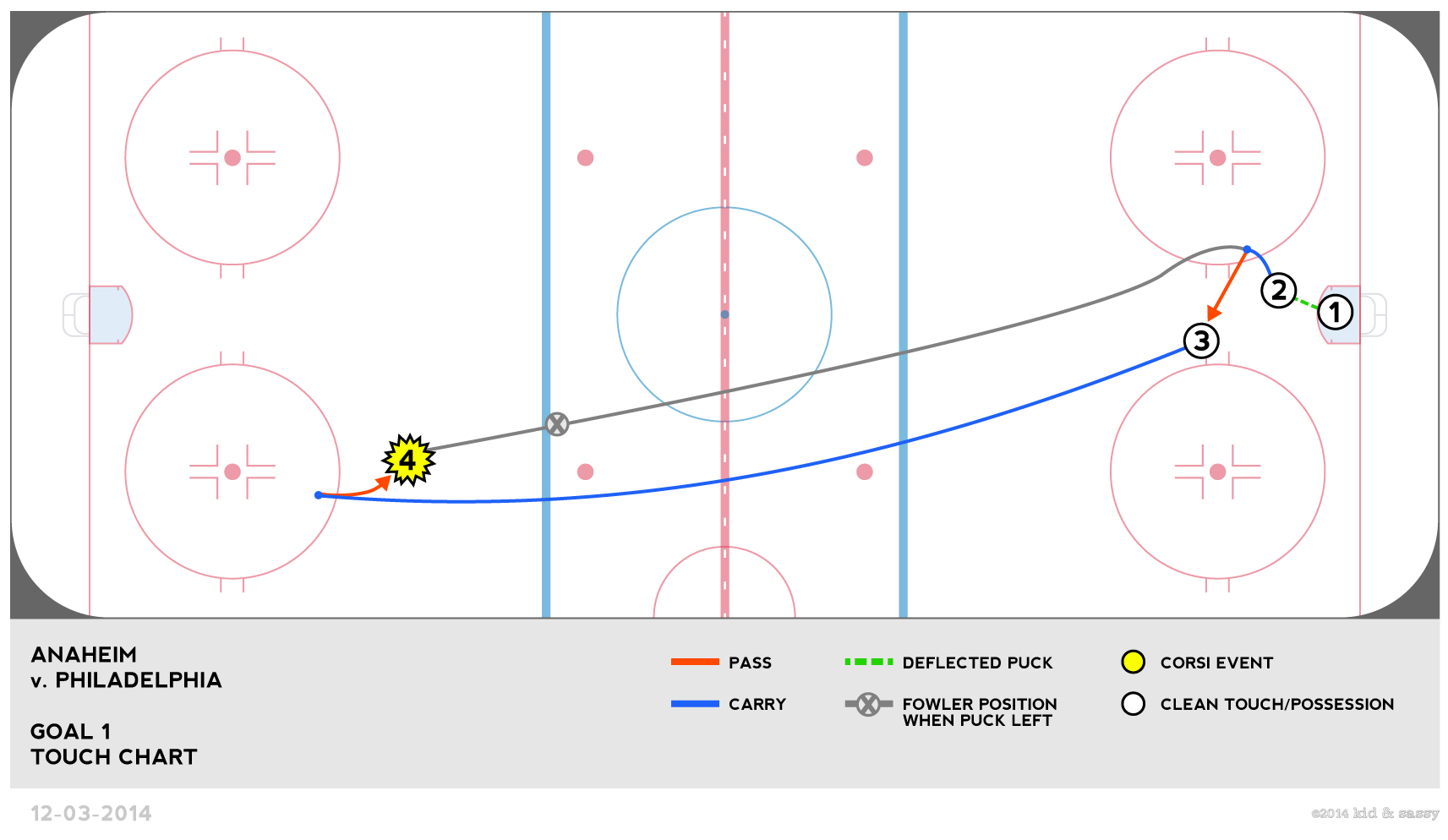 1- Andersen save!
2- Fowler grabs the rebound and goes
3- Silfverberg (controlled exit and entry) goes for a skate
4- Fowler's howler

Jakob Silfverberg gets on his horse and prevents the Flyers from resetting or changing, creating an offensive chance the other way. Cam Fowler sinks it.

I love love love this play because of the breakout, which is quick and clean. 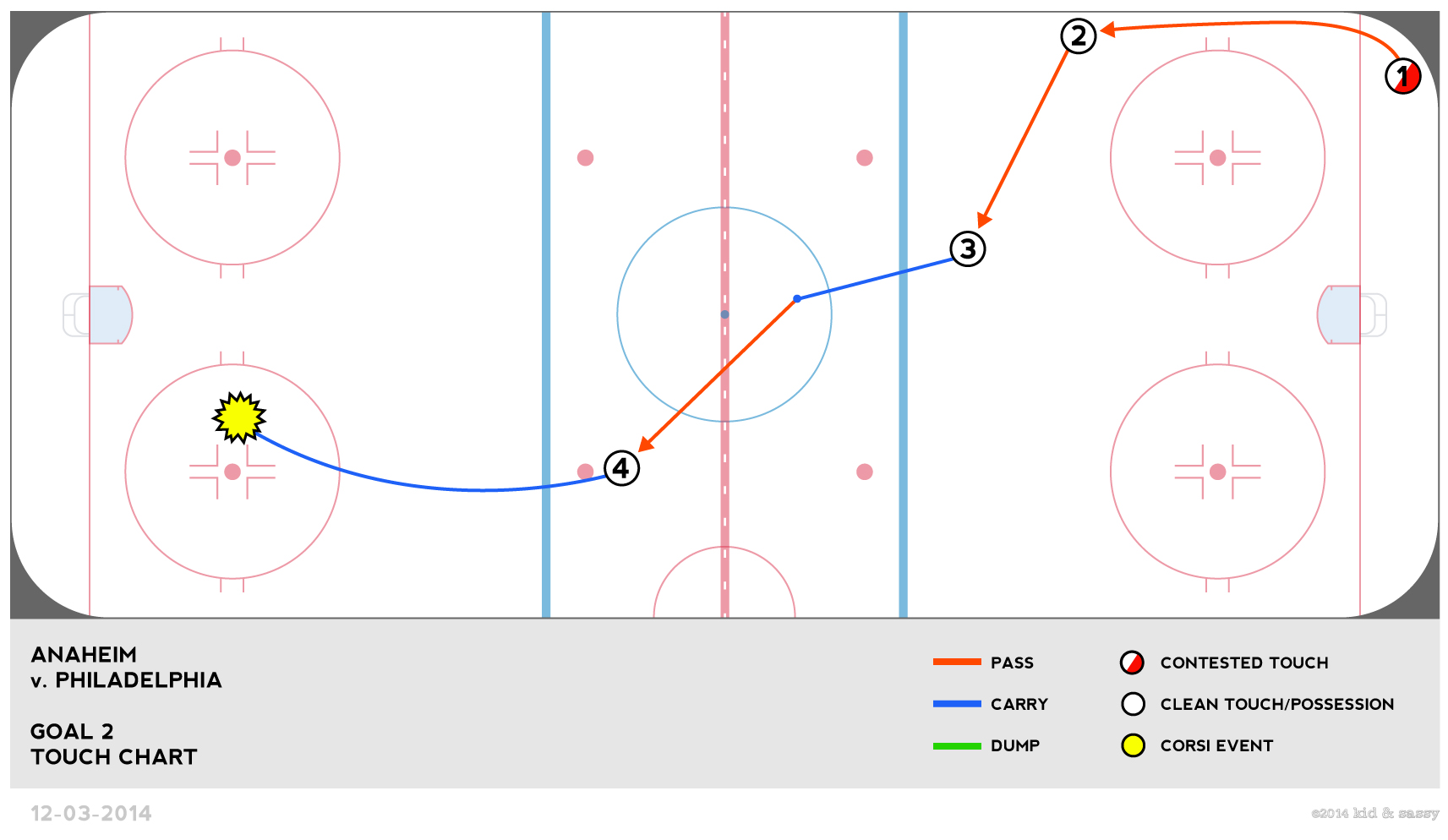 Lindholm driving up the middle is the proper support to offer the winger along the wall in a breakout. When a coach says "we stopped moving our feet," he's usually referring to four aspects of the game, two of which apply here: the backcheck and the breakout. In both areas, the Ducks played this perfectly: Mat Clark and Hampus Lindholm are back and in their proper positions. While Simmonds squeezes into space in front of Hampus, he's not in a clear position to receive a pass and attempt a clean shot. (In other words, Hampus stays goal side and doesn't overchallenge.)

Clark battles for the puck, wins it, and pushes it up the wall. What impresses me a lot here: Lindholm doesn't vacate his position until the puck has been pushed up. A lot of young players get caught puck chasing, but Lindholm watches it while staying more or less put until the puck will be clearly touched by Perry.

For Perry's part, he is playing his side well enough, if not a little high. But the defenseman on his side isn't pinching, so this is fine. Ryan Getzlaf has sealed the middle as well, goal-side of the high forechecker. Both are in prime position to support any breakout from the middle or the wall, which in this case happens. Perry one-touches the puck to Lindholm, who has skated hard into the middle once the puck was clearly on the move.

This is a play with a massively positive result born from excellent process. The first rush goal was skilled play by two players who worked hard to score. There's nothing wrong with that! But that's more difficult to coach, whereas the defense of the zone entry on the second goal, the herding of the puck to the corner (low percentage area), and the resulting breakout once the puck is won can absolutely be coached. 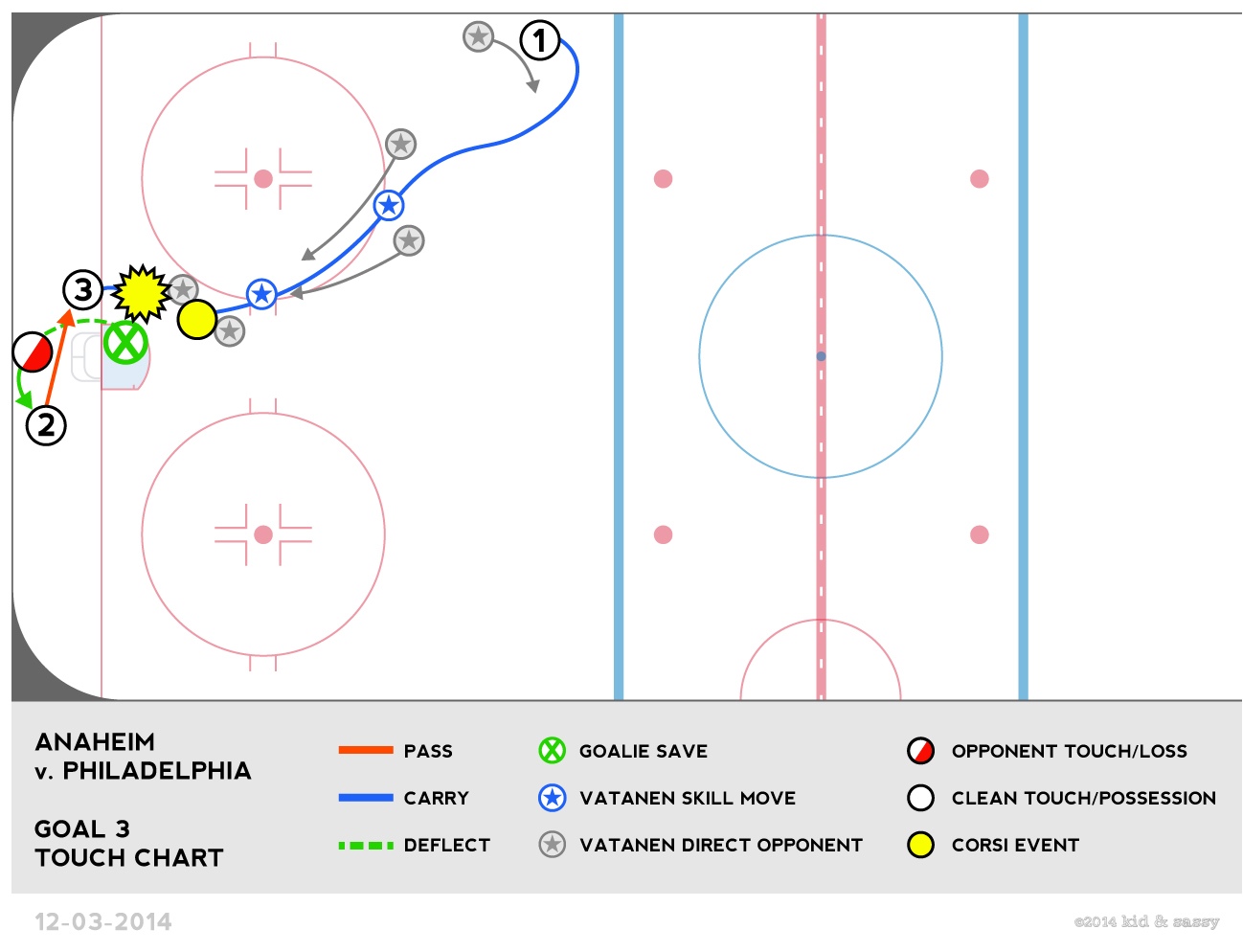 This is a huge individual effort by Vatanen. Pat Maroon's sealing off his opponent's lane and winning the puck back to Sami is also a big-time individual play. But Tim Jackman's gap control, another example of a player moving his feet, forces the Flyers player to rush a clear attempt to start the play. Jackman won't be credited with a point here, but a coach will watch this play again and say, "boys, never give up on pucks. That's how this goal happened."

I was impressed by this game overall, despite the last period and the goal given up at the very end. Anaheim playing a dominant game through two periods while netting three at even strength from it is the type of result I want to see more of. The Flyers became a more aggressive team in the third, especially once the Ducks went up a goal. Closing out games is still an issue in Anaheim, but if the process is yielding results in other areas, like scoring goals off direct, positive possession play, it is reasonable to assume the young blue line here will learn how to finish games up as well.

Here's the last goal video from that game, just for fun. Never, ever lose the joy that a Corey Perry hop in front of the net can bring you. Also, Big Dog goals are great.

Fin. ISH. (The next post is about faceoffs so get your faces ready.)