For the most-hyped game of the tournament, the USA turned in unquestionably their most lackluster performance, getting virtually no offense, losing to the Canadians for the second straight Olympics.

First Period Recap: The first few minutes of the first period pointed to exactly what we thought we were going to get out of this game: a high-pace game with a ton of scoring chances, and probably a high score.

Phil Kessel got the first big scoring chance of the game when he got a step on a Canadian defenseman and let a shot go from the right circle that was turned away by Canadian starter Carey Price.

But from there, the Canadians took over.

Limiting the US's ability to get over the red line with possession of the puck, the Canadians rushed over the American blue line time after time and threw shot after shot at the American net that forced goaltender Jonathan Quick to get in the game early and often. It was clear that if the USA was going to win, Canada was going to make him make 40+ saves to do so.

He was perfect through one period, that included 16 shots reaching him.

Perhaps it was made even more stellar by another storyline that emerged quickly: the beast that is Sidney Crosby had awoken. And he was flying. His line with Chris Kunitz and Patrice Bergeron made mince meat of Crosby and Kunitz's Pittsburgh Penguins teammate Brooks Orpik, who drew the assignment of shutting them down.

It didn't stop Crosby from getting a ton of chances, and setting up his linemates for them either. Had Quick not been on his game, this one would have been out of reach early. In total, Crosby's line had nine shots in the game, Crosby accounting for four of them, and Bergeron getting four of his own in just the first period.

The period ended with the shots favoring Canada 16-11

Second Period Recap: The second period started with many people hoping the USA would come back to the ice with energy and renewed intensity.

That must have gotten left in someone's hotel room.

The USA managed to play their worst period of the tournament, and Canada made them pay early for their lackluster effort, both in the first and this second period.

Jamie Benn eluded defenseman Brooks Orpik and tipped a Jay Bouwmeester slap-pass behind Jon Quick to put the Canadians in the lead, with what would turn out to be the game winning goal.

Contrary to the rest of the tournament, the USA did not respond to giving up the goal, but instead continued to look intimidated, rattled, and flat while crawling back into their shell.

To say the effort in this second period was lackluster is putting it nicely.

After the goal, the USA managed to surrender 12 more shots on goal, get out-attempted by nine, and shoot themselves in the foot with two sluggish power plays that generated only one quality scoring opportunity in which Carey Price stood tall to three or four American shots.

Dan Bylsma also blew his timeout late in the period on a USA defensive zone faceoff, a decision he probably regrets in hindsight.

Third Period Recap: Canada appeared to park the bus for the third.

The USA built up some better possession time and actually carried the puck over the red line more than at any other point in the game, but Canada was solid and held the blue line well, often times sticking five guys across the blue line to prevent the USA from coming in anywhere. 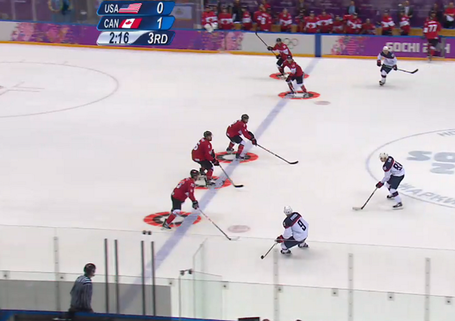 S/T to @Puckarinen via pbs.twimg.com

Max Pacioretty had probably the best shot of the period when a puck found him low in the left circle, but his wrister went up over the top of the net. Zach Parise also had a good chance from the mid-slot, but Price was equal to the task and kept Canada ahead.

Other than that, Canada's swarm the puck carrier strategy worked out great, as the USA never established a good rhythm of puck support and turned over puck after puck to the Canadians.

The Canadians even had the final two good chances of the game, as Jon Carlson broke up a two on one with Jeff Carter and Patrick Marleau. And once again at the end of the game, Marleau carried the puck towards the empty net, only to have Ryan McDonaugh block his shot.

It's hard to think that a period where the Canadians parked the bus, played defense, and told the US to "come at me, bro" as "even," but that's about what it was. Shots on goal were nine each, despite Canada still out-attempting the USA by nine.

Canada will play for the Gold medal on Sunday, and the USA will settle for a chance at bronze, falling 1-0 to Canada.

The Good: Canada's offense still isn't clicking at the rate it should be, but the defense is there, and it played this game near perfectly. Carey Price was rarely called upon to make a key save, as the skaters in front of him were responsible and effective at keeping the US possession to the boards, where they turned the puck over easily and resulted in a harmless possession. Sweden's possession has looked much better than the USA's this tournament, but with that kind of a solid defensive effort, you'd have to think Canada's got high hopes going for the defense of their gold medal.

The Bad: The USA's 25% power play went 0-for-3 and for the most part was held lifelessly to the boards on the big ice. Canada defended it perfectly. The USA managed only one good chance which Price stood up to, and the USA spent most of their six minutes of man-advantage power chasing the puck, or pointlessly cycling to try to crack the defense. The weapon that got them two key goals against Russia was held no more harmless than a pair of kindergarten safety scissors.

The Ugly: The USA's possession was horrible. It was extremely seldom that the USA was able to get more than two or three feet beyond the red line before being isolated and forced to dump the puck in. At that point, the US could almost never follow up and get the puck back, leading to an easy breakout and zone exit for Canada, who were ruthlessly efficient at it. Taking notes, Ducks?

The numbers back it up to, as Canada finished the game with a +25 Corsi (shot attempt) rating.

Likewise, the players that had been so pivotal for the USA straight up disappeared this game. Phil Kessel was held to nothing more than four shots on goal. Joe Pavekski was a dismal 2 of 12 in the faceoff circle (16%), Ryan Kesler's name was called by the play-by-plays once, and Patrick Kane generated nothing more than one opportunity for the USA with a good carry through the neutral zone. Overall just nothing more than a pretty deplorable performance from the USA in the biggest game of the tournament.

3rd MVP: Jonathan Quick (G, USA): Jonathan Quick made 36 saves today, probably about 10 of which were great to spectacular in quality. Without his performance, the Canadians probably win this game by four or five goals, and the USA leaves Bolshoy completely and totally embarrassed instead of the... you know what nevermind. They still embarrassed themselves. Jon Quick, however, did not.

2nd MVP: Patrice Bergeron, Sidney Crosby, and Chris Kunitz (F, Canada): This line was everywhere for Canada in this game. As stated earlier, they earned themselves nine combined shots on goal, and many of them were of very high quality. That doesn't even include the quality chances that were either blocked or missed the net. The USA did not appear to have an answer for them, as coach Dan Bylsma's strategy of playing them against Brooks Orpik clearly didn't work out. They didn't score, but they were lethal all night.

1st MVD: Jamie Benn (F, Canada): The Perry-Getzlaf-Benn line was dangerous, but perhaps the most dangerous one was the goal scorer, Jamie Benn. Benn was perfectly positioned on the play where he scored the goal, and nearly earned himself another when he found himself wide open in the right circle, only to have Jon Quick rob him with a spectacular sliding glove-hand save. The entire line was deadly on the cycle all night, and the USA clearly had no answer for them.