The days of Soviet hockey hammering the world like Nikita Khruschchev banging the podium with his shoe have long passed- Russian hockey yearns to return to it.

Most hockey fans born in the mid-to-late 80's never got to truly experience the awe inspiring dominance that was the Soviet Union's international hockey program. It's a tradition that no other country can match, winning gold medals in seven of nine Olympic competitions from 1956 onward, 19 of the 30 World Championship tournaments they participated in from 1954 to 1991, as well as the 1992 gold medal competed as the Unified Team as the country was crumbling. So when Russia, the largest of the former Soviet Socialist Republics, made the gold medal game of the 1998 Nagano Olympics it seemed almost a fitting continuation of history.

In the first Olympics with NHL players the Russians were lead by the white-hot scoring touch of Hall of Fame Captain Pavel Bure and backstopped by Mighty Ducks goalie Mikhail Shtalenkov. Despite the ballyhoo for the Canadian and American teams coming in, Russia opened eyes in a sweep through their group of Kazakhstan, Czech Republic, and Finland, outscoring them a combined 15-6. Medal round victories over Belarus (4-1) and Finland (7-4) set up a rematch with the Czechs for the gold, where Dominik Hasek would make a second period Petr Svoboda goal stand up to earn a shocking gold and resign Russia to silver. With notable names such as Bure, Fedorov, Yashin, and Gonchar it appeared that the Russians were ready to continue to carry the mantle of Soviet dominance.

However since that Olympiad the trend has been backwards; a bronze medal at Salt Lake City in 2002, fourth place at Torino in 2006, and sixth place at Vancouver in 2010. The adjectives of "disciplined", "dominant", and "creative" as descriptors of Russian hockey players during the Soviet era have been replaced by words like "enigmatic", "mercurial", and "soft" as more and more Russians have carved out careers in the NHL. [Ed note: I think Don Cherry is partially to blame for that. PS, happy birthday, Grapes!- Kyle] One of the defining stories of the Vancouver Olympics was the collective national desire that if the host Canadians were to win but one gold medal, it HAD to be hockey. The pressure facing Russia in Sochi to equal that will be every bit as high in a country whose tradition with the sport is every bit as rich and pride runs every bit as deep.

One would have to figure that scoring goals should come as no difficulty for a team whose forwards are highlighted by Alex Ovechkin (Washington) , Evgeni Malkin (Pittsburgh), Pavel Datsyuk (Detroit), and Ilya Kovalchuk (SKA St. Petersburg). Ovechkin may be the player under the most singular pressure to produce of any in the tournament, weighed heavily by lack of success for Russian sides that have featured him as amongst their most prominent players. Before leading Russia to the 2008 World Championship thanks to the Capitals early playoff exit at the hands of the Flyers, the last bit of gold Ovechkin tasted was as part of the 2003 World Junior team. In 70 appearances for Russia, Ovechkin has tallied 35 times, second most for his country behind the 39 put up in 96 games by Kovalchuk. Yet the most recent Olympic memory of Ovechkin was being held off the scoresheet in a 7-3 thrashing at the hands of Canada in the Vancouver quarter-final; though he currently tops the NHL with 39 goals, he faces the specter of a reputation for coming up small in the biggest international moments.

It would be folly to place the entire offensive burden on Ovechkin though, as in addition to Malkin (whose 29 goals in 49 appearances are amongst the best percentage-wise) and Datsyuk's Stanley Cup credentials, the team boasts a host of other scoring talent. Vladimir Tarasenko is currently third on the Blues with 18 goals; Artem Anisimov's 13 tallies are top five on Columbus; injury-substitue Alexander Semin is third on the Hurricanes with 13 markers; Valeri Nichushkin is tied for ninth in the league amongst rookies with 11 goals. Add in KHL talent like the aforementioned Kovalchuk, Alexander Radulov and Alexander Popov and the speed and scoring ability at the top of the unit is up amongst the best in the field. The question is whether they will be able to use the international ice sheet and additional space to their advantage, as a way around getting physically bullied and taken off the stride of their high-skill game. Another point of note is head coach Zinetula Bilyaletdinov with use his fourth line exclusively in a defensive role, so watch for that as a counter to opponents trying rough up the Russian skill while in turn trying to perhaps do the same.

The saying that "The best defense is a good offense" could aptly be used to describe many of the Russian defense corps over the years. It's not to say that hammers like Darius Kasparaitis haven't existed, but they've been exceptions to the rule of more offensive-minded defenders in the mold of Sergei Gonchar. The Sochi defense corps features perhaps as best a balance as the Russians cans strike between the two. Andrei Markov (Montreal) and Slava Voynov (Los Angeles) figure to be the two main offensive options, almost a fitting past and future look at the position. Though neither have lit the lamp with exceeding regularity, Markov has recorded 15 of his 29 points on the power play and figures to be the unit's fulcrum from the point on the man advantage.

Expect Alexei Emelin (Montreal) to be the biggest physical component, leading the team's defense with a top-25 121 hits, though Voynov isn't hesitant about throwing his weight around with 112 hits and Anton Belov (Edmonton) has delivered 92 hits. Also featured are Columbus duo Fedor Tyutin (+8) and Nikita Nikitin (+6), who are first and second amongst the unit in plus/minus. This won't be much in the way of a shot-blocking group, though Markov is seventh in the league with 127 blocks, and includes KHLers Yevgeny Medvedev and Ilya Nikulin. So long as the group avoids the disastrous in-zone breakdowns and moves the puck well with the forwards, it will be a competent unit.

Stanley Cup winner Nikolai Khabibulin is the last Russian netminder to have an Olympic medal draped around his neck after having finished third in the tournament with a .930 save percentage, behind Mike Richter and former Mighty Duck Martin Gerber. After having Evgeni Nabokov and Ilya Bryzgalov share duties in Vancouver, the spot in the Russian net is now hotly contested between defending Vezina Trophy-winning Blue Jacket Sergei Bobrovsky and the ascendant Avalanche keeper Semyon Varlamov. One could argue, and likely with great success, that the quality has never been as consistent at the position as it is now. 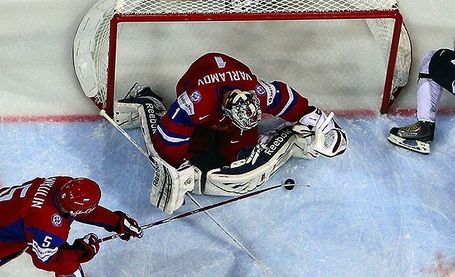 If going based purely on play this season, Varlamov would appear to have the inside track. He has been an absolute workhorse for the Avalanche, appearing in 45 of the team's 56 games and playing the 6th most minutes in the league. Perhaps most importantly has been that his success has come despite facing the second most shots against in the league, and still putting up the sixth best save percentage (.924) amongst goalies with 30 or more appearances. Meanwhile Bobrovsky won 12 of his last 14 starts, putting up .900+ save percentages in 11 of them, and is beginning to look more and more like the goalie that finished 2012-13 with a 2.00 GAA and .932 save percentage. Either one has game stealing potential, Varlamov with eight wins making over 35 saves and Bobrovsky with two. No matter the decision, goaltending should not be a concern.

Home ice can be a major advantage in an international tournament such as this. Canada was seemingly willed to victory by the raucous Vancouver crowd in 2010. Sweden proudly skated to the 2013 IIHF World Championship on it's home ice. A nation that yearns for a return to the machine-like dominance of the Soviet era will assuredly be out in force to back their team. With that nationalistic pride though comes the tinge of cynicism that's crept in with over twenty years since claiming the glory of gold. If things are going well support can move mountains; if not it could get ugly.

In many ways the fortunes of Russian hockey have paralleled their political positioning. For decades the Soviet Union served as the Communist counter-point to the United States in a bi-polar international political sphere, while serving as that same foil for Canada on the hockey rink. Russia now finds itself a nation rich with oil and other energy resources that has been unable to attain its political clout of decades past. It's almost as if offensive dynamos are a natural hockey resource as well, but they alone have been unable to propel the team back to the international Olympic fore.

Though nothing less than gold will quench the thirst of a hockey mad country, the double-edged sword of expectation may be too much to overcome. If the Russians are to win their first goal since the Soviet era, it will likely be on the back of an all-tournament goaltending performance. Bearing in mind North American sides struggle on the international ice sheet, that may not be out of the question. Expect the Russians to earn their first medal since Salt Lake City.