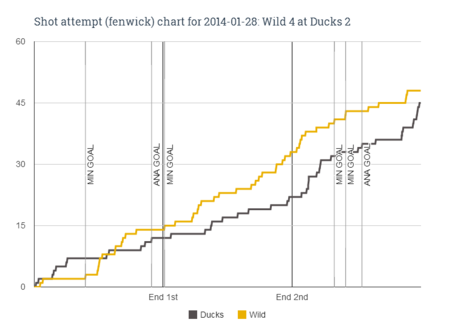 The chart is deceiving because it includes special teams play. At evens, the Ducks did just fine. They gave up a PP goal and lost about 10 minutes of EV game time on the PK. 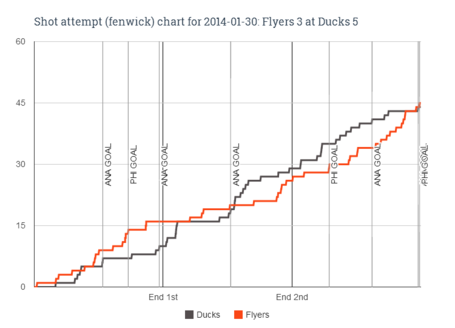 This was another positive game in terms of possession, but the trend of playing on the PK more than desired continued as well. Ideally, we want to see more games like this: good outcome, good EV play. 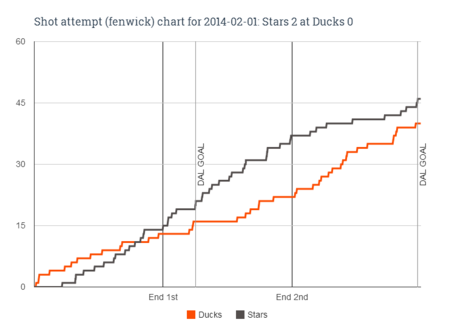 Bad game, bad effort, bad team play. This is one of the few real disappointing games of the season for me. I can usually find positives in most losses. Break down the bad goals, note the errors, but move on because hey, sports. This was the type of game the Ducks need to prevent from ever happening. They were outworked and outplayed by the Stars all game after taking the second period off. A strong five-minute start in the first and an improved third period couldn't overcome a Dallas team that was flying.

A note on that: look out for the Stars in the next couple years. While it's possible they could get into a wild card spot this year, they have the pieces in place to be even better in the next. If they keep playing a high pressure, puck moving possession game, they will be a very good team in the future.

Fowler is still having an effective season, but he's slowed of late in terms of driving play. Given the role he's in as a shut-down pairing, as oddly as he fits, his numbers are still pretty decent.

This dip is related to Koivu quite a bit, but his usefulness in non-EV situations keep him pretty high in my personal ratings based on delicious pizza with my choice of toppings.

Winnik's been bouncing up and down the lineup as needed, which has let me to see he's not the primary driver of play on most nights. He's not a drag either, but he needs effective linemates to have the best success. This is pretty normal, really.

I am hopeful Boudreau rethinks Koivu's future usage. Saku now leads Ducks forwards in allowing shots against. This is causing more offensive zone time and starts for other teams' best forwards, because Koivu's simply not breaking near enough to even to justify his continued use as a two-way specialist. With Bonino hurt though, there's not much choice unless Gabby wants to feed Getzlaf even harder starts.

NEW PLAYERS. One day, I want to rate goaltenders. One day. Also, Luca Sbisa. I really like him, but he's...well, he is not having a very good year at ice hockeying the puck around. But "small sample size" is a very nice way to say procrastination, probably.

DOWN A SLICE, UP THE COMP-EAT LEVEL

The Ducks lead the league in driving play when trailing by one goal. They surpass even the best possession teams in this area. What does this tell me? A couple things, I suppose. The main thing it tells me is that the team has the system and players in place to drive more play (and eat more pizzas). This is what we want to see, because scoring dries up in the playoffs, and driving play is where the battle is won. What teams like Chicago, Los Angeles, San Jose, or Boston have going for them that Anaheim doesn't is that they consistently drive play in all situations - not just when down a goal. This team can drive more play more often, so...hey, optimism.

Another thought I've had: the numbers here are probably the result of the team slipping some in light of winning so many games. (That reads terribly, but whatevs.) I've said it before, coaching a winning team is more difficult than it may seem. How can coaches get guys to commit to improvement or system details when success is being had despite mistakes? In the Ducks' case, with a few strong stretches born on some pretty sky-high shooting percentages and weaker systemic play, some bad habits have been compiling. One bad habit is sitting back until trailing a goal. Guys will cheat coverage more, thinking they can outscore problems - and as such, the team's overall possession ratings have dropped.

That drives coaches crazy, by the way. Every coach wants his team to play hard, with equal effort put into a tied game as in a game down a goal. No coach in the league tells his team to go out there, be comfortable and loose, let the other guys win puck battles, and then just ratchet up the effort if losing. Coaches preach hard work and effort, sticking to the plan, dictating the game, etc. The problem is in our humanity. Guys slack off a little when having success. It isn't bad leadership, bad coaching, bad anything - it's just normal for attitudes to change based on outcomes.

Imagine if you got straight-As in a class one year without really studying. Would you start studying for a random test one day in late January if you hadn't done so for any test before and had success? (This isn't a real like-to-like comparison, but transfer it over, and hey, close enough.) No, you wouldn't study, because you've had success not studying. Then that test (say, the Dallas Stars) kicks your ass, and you think, "oof, well for the next test I'm gonna study more." And you probably will.

Different players handle success differently. Some players are good "students" who study for every test no matter what. Coaches love them, because they bust their ass to play well every day - the problem is, they're usually not the most skilled guys. They've had to "study hard" to have the basic success that most skilled guys take for granted. Skill guys usually have to learn how to be more consistent in their effort, because they've relied on skill (or not studying and still acing a course) for so long. There are skilled guys who are both talented and hard workers, and those are the true elite players in the game.

Away from that metaphor and back to the pizza program we go. Getting the team to recommit to the system in place is easier when adversity presents itself. Some losses, like we watched against the Winnipeg Jets a week back, are the result of luck going the other way. These games aren't coachable moments so much as rallying moments - the staff has to keep the guys focused on the positives. Other losses, like against the Dallas Stars this week, are bad team games. And those are the coachable moments, because this team needs to cut down on those types of games by learning from the mistakes made in them.

What's the best way to do that? The Ducks need to carry over its play from when trailing by one goal into a full game effort. We know they're capable of it in stretches. If they can put that together regardless of the score, they'll be a tougher team to play. If they can put that together and sustain it, they will become a much better team overall.

That's how they have to play to have success in the postseason as well. Goals and chances dry up in the second season. Controlling play in all situations just ups the chances to make more chances, as chance would have it. Chancily. Ok I'm done.