So apparently the blue goes very well with gold...so don't forget Sweden in the run for the Gold. 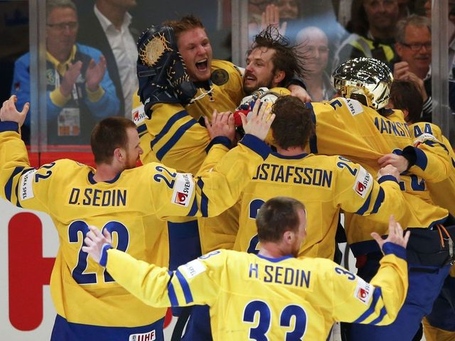 Take a look over that roster. It is stacked.

Prior to the official naming of rosters, the hype surrounding Team USA and Canada overshadowed the stacked roster of Team Sweden. The team is made up of a nice mixture of experienced veterans and young-up-and-coming stars. While they don't have the physical game as some of the other teams, Sweden's forwards have speed and the puck control to generate great playmaking opportunities. The rising young stars, Nicklas Backstrom and Gabriel Landeskog will undoubtedly impress with their hockey sense and tremendous puck-handling skills. Forwards like Daniel Sedin, Alexander Steen, Daniel Alfredsson, and Jakob Silfverberg own dangerous hands and scoring ability. The lone SHL player, Jimmie Ericsson, brother of D-man Jonathon Ericsson will add the grit and speed to this less physical team. Chip in the recent streak of Patrik Berglund and improving Loui Eriksson, and Sweden has a considerable depth of dangerous goal-scoring forwards. A couple of the blue liners such as Oliver Ekman-Larsson and Jonathon Ericsson are excellent threats as two-way players in the back end; they are incredibly skilled with moving the puck and do not hesitate to shoot from the blue line.

The greatest strength the team has offensively lies on the larger international ice. European teams have seen greater success on larger ice surfaces in the recent IIHF World Championships and the 1998/2006 Olympics. (But then again, Canada and US earned gold and silver by playing on big ice during the 2002 Salt Lake City Winter Olympics.) Sweden specifically has medaled in all but one of the past five IIHF World Championships. In addition, the larger ice will help out the less-physical, but more speedy and creative Swedish team.

However, Sweden's offense remains questionable for several reasons. The biggest being weakness is (Spoiler alert to the X-factor) injuries. Health has been a major issue for most of the forwards representing Sweden. Most of the stars have been affected by either a slump or an injury sometime this season. Most notably, Steen began the season giving Alexander Ovechkin a run for the Rocket Richard Trophy; but he has cooled down considerably since his concussion. The fact that the Sedin twins haven't been so much of a force may be the biggest reason for the current slump in which the Vancouver Canucks find themselves in. Henrik missed games due to his rib injury and Daniel just hasn't been scoring. The twins are obviously struggling this year in the NHL, but will they be able to muster up the will to spark the offense for their team in Sochi? Even Anaheim's own Jakob Silfverberg began the season hot but has seen a major dip in his production since he sat out with a hand injury.

There is still some question of how much offense this skillful and talented line-up of forwards can generate in Sochi. The forwards are extremely responsible on both ends of the ice, but some tend to be defensive-minded players that occasionally comes to the detriment to their offensive game.

The beauty of this team is going to be found on the blue line; Sweden's defensive line-up is arguably the best among the teams. The blue line presents a flock of star defensemen that match up against the top lines of the NHL night after night. They will be led by the young prodigies Erik Karlsson and Oliver Ekman-Larsson. Karlsson, the 2012 Norris Trophy winner, leads all NHL defensemen in scoring (14 goals) and among the top in TOI. A power play specialist, Karlsson never hesitates to put the puck on the net. Ekman-Larsson is also offensive-minded and is rarely found out of position. Both are extremely mobile and fast skaters with impressive puck control abilities. But alongside the youth, Sweden boasts the veteran experience with Niklas Kronwall, Johnny Oduya, and Niklas Hjalmarsson. Kronwall will add physicality as well as shutdown play on the blue line.

Slightly similar to Team Switzerland, Team Sweden is more predominantly a defense-minded team. Even up front, forwards like Gabriel Landeskog, Marcus Kruger, and Carl Hagelin are very responsible in the back end. This team isn't going to be giving all too much in their defensive zone.

There really isn't much of a weakness on this Swedish blue line. The larger ice and the speed should easily make up for the lack of physical game on the blue line. Opposing teams have their work cut out for them against this defense.

and the man crushes.

King Henrik Lundqvist has the team resting upon his shoulders. As an NHL rookie, he brought Sweden to it's gold in the 2006 Turin Olympics. But Lundqvist and Sweden were sorely disappointed last Olympics in a Vancouver, after being upset by Slovakia in the quarterfinals.

(You can read his thoughts on Sweden's success and the Olympic fatigue with SB Nation here.)

Despite the slow start to the season, Lundqvist has found his game and has been playing his best hockey of the season right now. He had two fantastic outings during two Stadium Series against the New York Islanders and the New Jersey Devils. He is currently 21-18-3, with a 2.43 GAA and .918 SV%. If Lundqvist can stay healthy and play his game, opposing teams will have a very difficult time finding any scoring opportunities on Sweden. 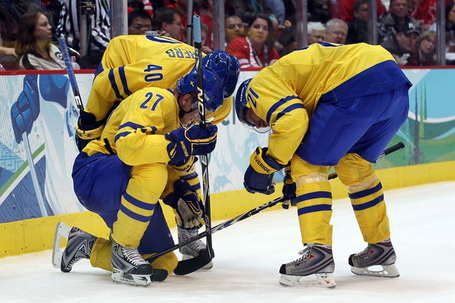 I've decided to split the X-factor into two parts, the latter having to do with the other. Team Sweden's main concern will be health in their running for the gold. The roster from the outside looks spectacular as it is...but when looking at the players' individual seasons, a lot of key injuries stick out in bold. Detroit Red Wings' Johan Franzen has already been replaced by Gustav Nyquist due to his concussion-related injury. Henrik Zetterberg has been sidelined twice this season with back problems. Henrik Sedin's rib injury cost him his iron man streak and sat him out for six games. Similarly, Jonathon Ericsson also missed ten games after receiving a rib injury. The red-hot Alexander Steen and Loui Eriksson both sat out with concussions.

Goaltending is going to make it or break it for Team Sweden's Olympic contention. There really is only one name in net--Henrik Lundqvist. Along with the first X-factor, his health is the greatest concern. He sat out two games this season with an injury, that may have been a factor in his no-so-king-like-Lundqvist form. If he isn't healthy, then Sweden loses all contention. The back-ups, Jonas Gustavsson and Jhonas Enroth, are merely average netminders. So if Lundqvist is neither red-hot or healthy, Sweden will find itself in the same place as the last Olympics.

Sweden will be competing in Group C along with Switzerland, Czech Republic, and Latvia. Out of Group C, I have no doubt that Sweden will come out first. I am personally looking forward to watching Sweden play against Switzerland in the prelims. Both teams are defensively-minded teams with speed and puck control. Both teams have an advantage playing on larger ice. And both teams are depending on fantastic goaltenders. It will be a potentially extremely interesting game showcasing stellar goaltending and playmaking, or an extremely boring, low-scoring game.

Barring injuries, I think Team Sweden will be the strongest contender for the gold against Team Canada. I predict that Sweden will upset (if you can call it that) for gold in Sochi IF (and that's a huge IF) the players can stay healthy and perform to Olympic standards. But IF they can do that, Sweden is as sure as gold.