Anaheim's slump sunk even deeper as the second-overall Chicago Blackhawks walked away from Honda Center with both points in hand after shutting out the Ducks for the second time in three games.

Share All sharing options for: Ducks Lose Third Straight At Home 2-0 to Chicago

First Period Recap: The message from Bruce Boudreau to start the game was clear: up the pressure and the chances will follow. And they did. The Anaheim Ducks has some serious pep in their step to start the game, bolstered heavily by the recall of young Emerson Etem.

From the moment he set foot on the ice, Etem was flying, and the rest of the team fed off his speed, specifically linemate Andrew Cogliano.

From the get-go, Anaheim appeared to have their swagger back, and they looked like they had finally managed to re-focus and were going to play this game like it really mattered, which was a huge relief after the previous two horrendous performances.

Another guy who seemed to have some pep in his step early was 43-year-old Teemu Selanne, who had the best chance for the Ducks in the early going when he won the race to a loose puck and walked around Duncan Keith, only to be foiled by a nice aggressive move from Corey Crawford who came out quickly to cut off the angle when Selanne waited just a little too long to take the shot.

That wouldn't be his only chance as he would get another good bid later but his cross-slot pass would be denied by a sliding Chicago defenseman.

Sami Vatanen also earned himself a good chance on the Ducks first power play when he snuck down to the side of the net, only to have Corey Perry's pass be slightly off target and force him to take the shot out of his skates.

The aforementioned Etem and Cogliano also earned a good chance in the dying seconds of the frame when Etem chipped a puck out past the Hawks defensemen in the neutral zone and Andrew Cogliano beat them there for a partial breakaway that was saved excellently by a perfectly-positioned Crawford.

The Ducks played their best period of hockey in weeks and the statistics definitely showed it. A total of 15 scoring chances were earned, resulting in 15 shots on goal for the hosts, to only nine for Chicago. Despite the fact that the period ended with no score, there was reason to be optimistic about Anaheim's chances.

Second Period Recap: Thirty-nine seconds into the second period, that hope unceremoniously killed. What looked to be a harmless 3 v 3 rush into the Anaheim end took a sour turn when Corey Perry switched which man he was covering at exactly the wrong time. The jump left puck carrier Marian Hossa alone mere feet in front of Jonas Hiller's crease. Demonstrating a nice bit of patience, he skated around Hiller and popped the puck in short side to give the hosts a widely undeserved 1-0 lead.

While I thought to myself the Ducks were playing well and still stood a chance in this game, I couldn't shake the feeling that we just seen the game winner. I clearly need to stop thinking these things because it would turn out to be true.

The truly upsetting part is this really appeared to rattle the Ducks. The team that for so long didn't care whatsoever if they went down a goal looked visibly shaken and all of the great things they did during the first period began to disappear as the Ducks allowed Chicago back into the game.

The forecheck that was so effective in the first period almost immediately vanished completely. The Etem-Cogliano tandem that was so hungry-looking suddenly went completely invisible as the Hawks played them perfectly to negate any advantage their speed might have given them. And the crisp movement that saw the Ducks quickly turning defense into counter and offense, suddenly turned into a parade of poor passes, errors in puck handling, and a seemingly endless number of turnovers.

Eight minutes into the second period, Chicago had outshot Anaheim 8-2 in the frame and were in nearly full control, earning chance after chance in front of Jonas Hiller.

Kris Versteed had a stunning chance denied by Hiller as both Sami Vatanen and Teemu Selanne moved to defend puck-carrier Patrick Kane, leaving Versteeg all alone barreling right down the Anaheim slot.

The Ducks only semi-decent chance of the period came on a late power play when a cross-ice feed found Corey Perry alone, but once again the pass was towards his feet, and he couldn't get much on the shot, resulting in a relatively routine save for Corey Crawford.

The Hawks lead at the end of two periods by only one goal, but they outshot Anaheim 9-8 despite Anaheim getting (and likewise completely screwing up) the only two power play chances in the frame.

Third Period Recap: This period really didn't appear to start any better, but eventually Anaheim predictably turned it around and started to earn a good number of chances of their own. I say predictably because that would logically mean Chicago parked the bus, blocked shots, and didn't allow any really dangerous scoring chances for Anaheim at all.

In fact, they only allowed the Ducks six shots on goal in the entire period.

Most of them came in a flurry about midway through the period in which Crawford was forced to make a few solid stops on Kyle Palmieri and Daniel Winnik in quick succession.

However once Chicago got ahold of the puck and re-settled, it was more of the same frustrating hockey that the Ducks couldn't crack the entire night.

In total, Chicago blocked 22 shots on the night, many of which coming in the third period as they did everything in their power to prevent pucks from even reaching Corey Crawford.

The final dagger came with just under three minutes remaining. Cam Fowler took a puck out from behind his net and fanned on the clearing pass, placing it right on the tape of Marian Hossa. Hossa then fed a backhand pass to a breaking Jonathan Toews who slipped it past Jonas Hiller short side.

Game, set, match. Ducks lose their third straight in regulation, all of which came on this homestand.

The Good: I think the reason this game is so absolutely infuriating to me is because of what the Ducks did well. The first period showed signs that the team who dominated and we loved watching are still there. Emerson Etem looked stellar in his first few shifts after getting called up and he created some great chances thanks to his blinding speed and solid chemistry with equally-fast Andrew Cogliano. As a result the forecheck for this period was strong and forced a good number of turnovers with which the Ducks created a lot of chances.

Hell the possession numbers even look pretty good for this one.

The Ducks only had seven players with a sub-50% Corsi total, and, well, just look at this Fenwick chart. 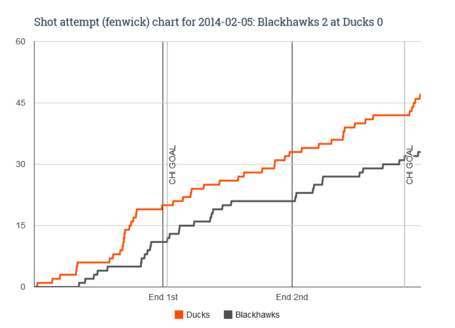 The Ducks never trailed Chicago in this regard, meaning they played arguably their best game statistically possession-wise in weeks, and definitely their best since this damn slump began. Yet they still lost.

The Bad: It's remarkably clear that the secret on how to beat the Anaheim Ducks is out. The offense got more chances tonight thanks to the forechecking effort through the first half of the game but the creativity and the finishing finesse that defined our sky-high shooting percentage was still conspicuously absent. This team is simply not confident in the offensive zone right now and they're letting a lot of chances slip away by either failing to shoot when given a good chance, or settling for a poor quality, easily blockable or saveable shot.

Oh, and don't even get me started on the power play that went 0-for-5 tonight and looked almost entirely lifeless against a team whose PK has been struggling as of late, and sits mired in the bottom third of the league.

The Ugly: Speaking of a lack of confidence, this team is absolutely rubbish with possession of the puck in their own zone right now. This is not a new trend, but with the scoring drying up it's now become one that absolutely needs to stop if this team ever wants to start winning hockey games again. Every team that goes up against the Ducks simply puts a lot of forechecking pressure on our puck handlers in our own zone and the entire team is coughing up the puck. The defense pairs are not finding each other, the puck is not moving smoothly to the forwards, and perhaps most importantly, passes are missing players and as a result pucks are not leaving the Anaheim end. I counted one stretch in the second period where Anaheim turned the puck over five times before they finally managed to get the puck out over their own blue line. Likewise it also resulted in the stretch where Anaheim iced the puck three straight times with tired bodies on the ice and forced Bruce Boudreau to waste his timeout. This team has got to be more efficient with the puck in their own end, more supportive, and get carry pucks out of their zone with confidence or else the turnovers like tonight's which cost them the game will only continue to happen and this team will continue to lose games while they struggle to score.

3rd Icehole: Sami Vatanen has been good in his call-up with Anaheim, don't get me wrong. While I've loved his aggression and nasty sharp edge to his game, he definitely struggles with learning when to reel it in at points and not over-extend himself as a defenseman. Tonight he got caught doing so several times and the Blackhawks earned chances because of it. He's on the cusp of being full-time NHL ready, but he needs to improve in this area before I'm fully comfortable with it.

2nd Icehole: Despite this being somewhat of an Olympic sendoff for the young defenseman, he made some pretty gnarly mistakes. Dude... minus-two on the night and that colossal gaffe of a turnover that led to the game-sealing goal from Jonathan Toews. I understand that everyone makes mistakes and he legitimately fanned on the pass which happens to the best of us, but as a top defenseman you're relied on to make that pass perfectly at times when it truly counts... like that one. Let's hope to god he got it out of his system tonight and he doesn't do that again starting next week in Russia.

1st Icehole: This one doesn't go to any specific player but to the entire team as a whole who just can't wrap their heads around any form of a breakout system that's effective. Passes are still not crisp, the offense still can't get a shot through to the net, and the team is being forced time and time again to either ice the puck or just flip it out of the zone and get a change before the opponent just rushes it right back in again. Until this team can right the ship and get its confidence back, we're in for a huge struggle. Going 1-4 on a homestand in a building in which they've been so dominant this season is flat out unacceptable. It was a positive sign for me that the players looked so miserable while doing the Olympic ceremony at the end of the game because it showed to me that the core guys of this team took this loss hard. I can only hope they use it as motivation to get their act together for their last game before the Olympic break.

Next Game: Saturday, February 8th at 5pm vs. Nashville Predators