It says a lot about the enduring legacy of a hockey player when one considers how long they're able to play at a world-class level. Chris Chelios is the NHL's most recent of these seeming eternal talents, skating through a record-tying 26 NHL seasons before retiring in 2010. The man whose record he tied is the inimitable Mr. Hockey, Gordie Howe, who first took to the ice with the Detroit Red Wings in 1946-'47 and would play a total of 26 NHL and six full WHA seasons before retiring with the Hartford Whalers following the '79-'80 season. In addition to a Hall of Fame career that saw him set most all the scoring records that Wayne Gretzky would eventually break, Howe also has the distinction of being the only player to suit up and play hockey professionally in six decades when he played a game with the Detroit Vipers of the old International Hockey League in '97-'98.

In making his sixth Olympic appearance with Finland, Teemu Selanne has a fitting capstone to an international career with the Leijonat that has cemented his spot as the Finnish 'Mr. Hockey'. From his first appearance with the team in Albertville in '92 Selanne showed the scoring touch that would eventually earn him the Olympic points record, scoring seven goals and dishing four assists in eight games to finish fourth in the tournament with 11 points. In the first tournament featuring NHL players Selanne and Saku Koivu would finish tops in scoring with 10 points apiece at Nagano in '98, then the duo would again finish atop the points list with 11 each at Torino in 2006. Finland has had its most extended period of international success thanks to a generation that Selanne played a titanic part, and now is one of the biggest inspirations for the current wave of Finnish players .

Finland is the answer to the trivia question "What was the last country to play and defeat the Soviet Union in Olympic hockey" as they earned a silver medal in 1988 Calgary Olympics thanks to a 2-1 victory on the last day of final round competition. In those days the tournament didn't have a playoff but rather the top three finishers from each group would be placed in a final group, coming in keeping the 2 results against their group, then playing the three teams from the opposite group with medals awarded based on the final standings. It was the first Olympic medal for Lejonen, who had competed in 8 prior events dating back to 1952. After winning bronze at Lillehammer in '94 the Finns have benefitted greatly from having their NHLers, winning bronze at Nagano in '98, silver at Torino in 2006, and bronze at Vancouver in 2010. The Sochi team will look to earn a medal at a third consecutive Olympiad for the first time in Finland's history, and will do so with the program at a crossroads.

Though Selanne is still a world class player he's no longer counted upon to shoulder a heavy scoring load for the squad, as that responsibility has been passed to the likes of Mikko Koivu (Minnesota), Valtteri Filppula (Tampa Bay), and Jussi Jokinen (Pittsburgh). Koivu is of particular concern for the Finns at the moment, as he is still not cleared to practice by the Wild after undergoing surgery on his ankle. If he is unavailable it will create a rather sizeable hole at center, where his solid two way play and 20-goal NHL scoring touch will be missed and likely place more importance on the likes of Olli Jokinen (Winnipeg) stepping up offensively despite his leading all forwards with 31 blocked shots. Filppula has dealt with injuries this season as well but is having one of his finest years with 20 goals and 21 assists in 55 games with the Bolts, looking more like the player poised to break out after '11-'12 rather than the disappointment of last year. Another player to keep an eye on is Mikael Granlund (Minnesota), who while putting up modest NHL numbers was a major contributor to the Finns gold medal performance at the 2011 IIHF World Championships, finishing tied for third in the tournament with 9 points.

When speaking of the transition from old to young, Aleksander Barkov (Florida) figures to be one of the key youngsters for the squad. Currently tied for 10th in the league in rookie scoring with eight goals and 16 assists, Barkov is one of the few bright spots as his 24 points are good for third on a dismal Panthers squad. Other NHLers of note include the pesky Tuomo Ruutu (Carolina) and Lauri Korpikoski (Phoenix), with 149 and 109 hits respectively, who will be counted upon to bring some sandpaper to the squad. Rounding out the unit are KHLers Jori Lehtera (Sibir Novosibirsk), whose 40 points on 10 goals and 30 assists are tied with Ilya Kovalchuk for ninth on the circuit in scoring, Petri Kontiola (Traktor Chelyabinsk), Leo Komarov (Dynamo Moscow), and Antti Philstrom (Salavat Yulayev Ufa). Juhamatti Aaltonen (Kärpät Oulu) is the lone Finnish leaguer, where he is third on his team in scoring with 12 goals and 19 assists. 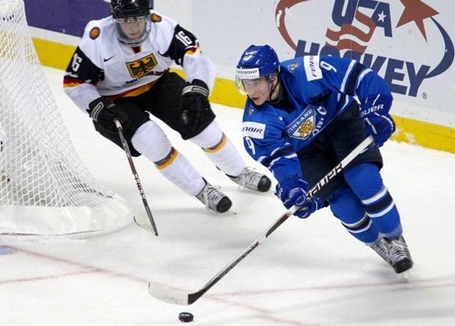 It's again an interesting blend of experience and youth for the blue line corps, and the Ducks' Sami Vatanen figures to play a big part. It speaks volumes to the strides Vatanen has shown while not being a full-time NHLer to earn a spot on the Olympic team; he's the only defender with power play goals this year (2), and is the leader in hits with 58. Kimmo Timonen (Philadelphia) and Sami Salo (Tampa Bay) are the veteran anchors of the unit, with Timonen bringing a two-way flavor compared to the more defensively focused Salo. Timonen will figure to quarterback the powerplay as 13 assists of this 19 points this season have come on the man advantage, and Salo's renowned cannon from the point will feature as well.

Vatanen and Olli Maatta bring the youth, and both have shown a deft scoring touch to go with solid play in their own end. The 19-year old Maatta is somewhat surprisingly the top scorer on the unit with five goals and 16 assists, in addition to leading the group with 92 blocked shots. It would make sense for the two youngsters to be paired with a veteran counterpart, taking advantage of their abilities at both ends of the rink. The rest of the corps is made up of a few familiar international league faces in the KHL's Sami Lepisto (Avtomobilist Yekaterinburg), and Ossi Vaananen (Jokerit) and Lasse Kukkonen (Kärpät Oulu) from SMliiga who will round out the unit and should provide additional physical presence.

Long gone are the days of Kari Takko getting lit up between the pipes for the North Stars and Jarmo Myllys fairing even worse with San Jose. Finland's crease has been a bit of a revolving door since 1998, with 7 different goalies seeing playing time over the past four Olympics. The aforementioned Myllys and Ari Sulander in '98, Jani Hurme and Pasi Nurminen in 2002, Antero Niittymaki in 2006, and Miikka Kiprusoff and Niklas Backstrom in 2010 have all appeared in net. The current generation of Finnish keepers may be the ones to bring stability to the position, as well as world class performance.

Tuukka Rask (Boston) has made Bruins fans forget about Tim Thomas by putting up two straight seasons with a save percentage just under .930 and a GAA right around 2.00, and is top three in both categories amongst goalies with more than 30 appearances while leading the league with five shutouts. Antti Niemi (San Jose) continues to be a somewhat awkward yet still sound and solid goalie, and Kari Lehtonen (Dallas) borders on criminally under-appreciated putting up solid numbers while facing the fifth most shots in the league. Expect Rask to get the start, but any of the three are more than capable.

The beauty of hockey is that as long as the other team isn't scoring you still have a chance. While the Finns are nowhere near as offensively challenged as a team like Switzerland, they will still be heavily reliant on their goaltending to carry them, particularly with some of the injuries up front. Rask has the top save percentage of every NHL goalie coming to Sochi, and Niemi has followed up a Vezina nomination season with another solid year. In a short tournament like the Olympics, sometimes all it takes is a goalie to get hot.

The energy is alway great from Scandinavian supporters (via iamatraveller)

With an opportunity for history, the Finns have the fortune of playing in a group with both Austria and Norway, and while Canada will be a daunting challenge they should have enough offense to ensure passage to the medal rounds. The question then becomes who on this team will step up and score the big goal to give the goaltending something to work with. While familiarity and recent success on an international ice sheet certainly plays into their favor, it's hard to see Finland as anything beyond a dark horse.

Still, stranger things have happened. If Rask can do his best Nagano Dominik Hasek impersonation and get timely goal scoring, the Olympics are an open enough path in a short tournament for Selanne's final outing to end in gold. It'd take a lot of things to break right for that fortune to smile on Suomi. Expect an out round elimination.