Kid Ish's Pizzametrics, Week 21: All Out Of Pizza

The pizza pie has been consumed, here's what's left.

Share All sharing options for: Kid Ish's Pizzametrics, Week 21: All Out Of Pizza

I'm feeling surly this week because the Ducks are taking steps back, and I want to talk about that. 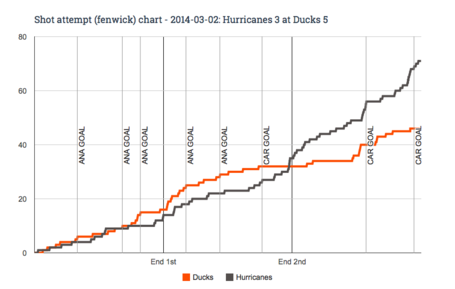 The Ducks played well. Five goals well? No. Cam Ward sucks. They played two goals well, so giving up more than one was pretty crap, overall. 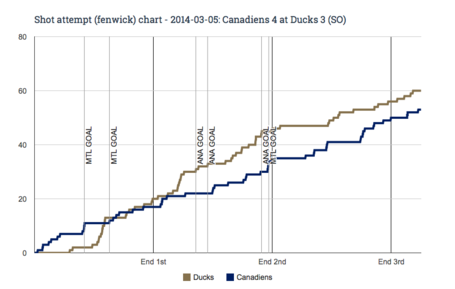 The first 10 minutes of this game are an abomination to sports in general. How embarrassing for all of us, the fans. I have future intention of getting back into what I noticed in this game. I'll reference it versus the Blues game, it'll be "fun." 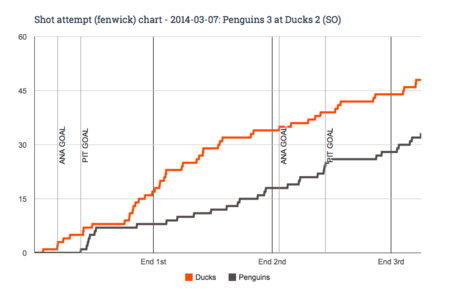 The Ducks finally carried play over a "weaker opponent." I put quotation marks there, because with their top two defensemen back in the lineup, the Penguins are probably a lot closer to the Ducks than not. Both teams are awfully top heavy and reliant on goaltending to win games.

I removed the festive Pizzametrics slice ratings because it's time for real talk. The ratings might return next week. We'll see. [Ed. Note: Based on last night's game, I doubt it. -CK]

That's thin. I also recognize that I'm human and biased. The impressions that various stats (which are not human or biased) leave me is this: this team's effective players are the ones above but with an asterisk next to Cogliano, Fowler, and Lovejoy (they aren't positive, but they see the toughest minutes on the team and do ok), as well as Mathieu Perreault, Jakob Silfverberg, Hampus Lindholm, and Bryan Allen.

Still pretty thin. Silfverberg has seen significant playtime in various roles and still shown well of himself but the others are used in limited capacities. So our top end guys and our bottom end guys are great. What the hell is happening on lines two and three then? 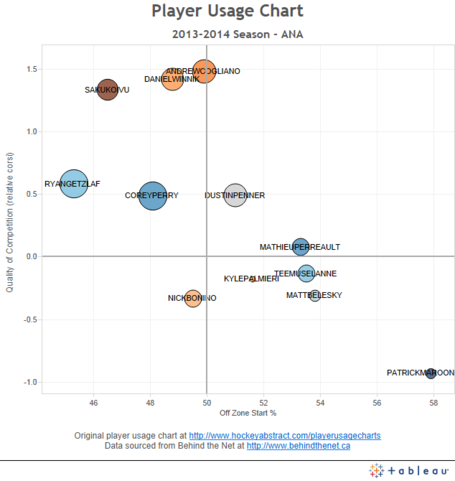 Line two is basically Nick Bonino and Matt Beleskey. They could be called line four, but let's not get distracted here. Prior to Dustin Penner getting moved, Kyle Palmieri generally played on that line to start games. How many times have we seen Beleskey-Bonino-Palmieri combine on the score sheet this season? Not enough. Not nearly enough. (And yes, Boudreau blends lines, so this isn't always like-to-like. Of late, Perreault sees second line minutes more than Bonino but just with the sheltered starts of a fourth. We know this.)

The Bonino line has it pretty damn cushy against opponents. Overall, it faces even weaker competition than Perreault and the "fourth line" (maybe due to teams mistakenly thinking Teemu Selanne has game). Beleskey's possession numbers tend to support his alignment against weaker lines despite slightly better starts. So away from the points Bonino gets with a man advantage, what does his line have going for it then? A combined 30 goals and 52 assists (assuming it is he, Beleskey, and Palmieri), which includes PP points they probably earn apart, against the weakest opponents on average is just not good enough.

Ryan Getzlaf by himself has 29 goals, 42 assists. Corey Perry by himself has 35 goals, 31 assists. This uneven balance of scoring (and driving play) has got to improve, no matter who ends up skating on "line two" on a given night. And look, on some nights the second scoring line is really line three, but that's what playing a dedicated checking line does to ice time. (One note in Bonino's defense: he's playing a ton of minutes in all game states, probably the most he's ever played in his career, so it isn't a total shock to see his play falter even strength.)

Line three is Saku Koivu, Daniel Winnik, and Andrew Cogliano. They aren't supposed to score any goals, because Boudreau has that line playing against the stiffest forward competition each night to free up the top line and the seemingly useless second scoring line. Nonetheless, Koivu in his ripe old age has as many goals as Palmieri. Cogliano has more goals than Bonino. And yes, it is cherry-picking players and positions in the comparison, but Koivu and Cogliano shouldn't be outscoring Bonino and Palmieri against stiffer competition.

I don't want to take anything away from Koivu here, but he's slowing down massively because age does that. His first step is now a step behind, and he's reaching with his stick so much more than he ever did before. He's also taking tripping, hooking, and interference penalties more than I remember from him. The result is that while Koivu's starts and competition are generally the hardest on the team, he's being eaten alive (in possession) by it as opposed to thriving in it.

The reason Koivu losing the possession battle matters in a bigger sense is that it makes Getzlaf's line start way more in the defensive zone than it was earlier in the season. When hemmed in, Boudreau's options are as follows: leave out Koivu, put out Bonino, or put out Getzlaf. Perreault isn't an option here because as long as he's paired with Selanne, DZ starts will not happen. Bonino sees some starts, but his weaker forward play of late has usually translated into extended time defending still, so Getzlaf goes in at some point anyway. 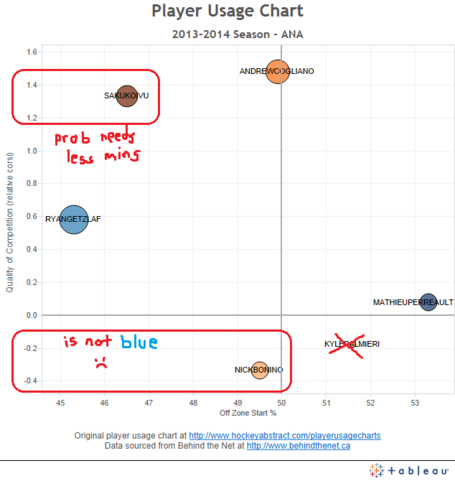 This is where Anaheim's possession is failing. An older vet and co. against the toughest competition is fine in isolation if it frees up other scoring lines for offense. This is being coached correctly, from what I can see. But the secondary lines have got to drive more play, which is disrupting shot attempts against and creating shot attempts for (and that generally translates into points), to allow for the strategy to work.

As is, the top line (Getzlaf and Perry) isn't scoring at nearly the same torrid rate as before. Having to work more to get the puck into the offensive zone takes away from the time they can spend trying to score there. (Yet they still carry this team's water, because they rule.)

Lest anyone think I'm blaming one or two players here, I'm not. I'm simply identifying where the team is faltering in two glaring places, which is the secondary scoring line and the sorta checking line. More goals need to come from the guys designated for that, and better suppression needs to occur against opposition shots. Ideally, a second line driving more possession loosens the minutes of a pure checking line anyway, since the opposition is defending more than attacking, and all this sorts itself out.

Regarding Perreault and Selanne, and while I'm being honest with everyone: Selanne has seven goals this year. He tells the media it's because his minutes are so few. He is probably wrong. Getzlaf will see the most minutes, and Selanne doesn't play from a low cycle. Koivu will likely see the second most, and Selanne has very little two-way ability off the rush. While I've been calling Bonino the second line here, average ice time between Bones and Perreault is pretty slim, so Selanne's getting what's there without double-shifting.

But to counter this, Boudreau is giving him cake-with-so-much-icing-on-top zone starts so that he's that much closer to the goal, and he shouldn't need as much ice time to get the puck on net. In theory, he'd probably play more if the team had better starts, so he should take up some conversation with Bonino and Koivu, I guess.

Merely mentioning that Selanne is just old and not as good anymore usually makes people rage, but his 53% OZ start rate and fairly decent possession numbers should amount to a helluva lot more than seven goals, 13 assists. Especially since his ice time has been with one of Maroon, Beleskey, or Silfverberg on the other side all season - three guys who move the puck up well. This isn't an ice time issue to me then. He gets great starts. They get decent possession numbers. Nobody's finishing when he's on the ice, and Selanne IS the finisher.

The thing with Selanne is, he's also not bad enough to be harping on real bad, because he can turn into a points monster for stretches at a time. Sigh.

Let's remember here quickly that at the start of the year, when more players were carrying play forward, zone splits were equal and ice time was much more evenly divided. There was less obvious divide between lines two, three, and four. But as forward play has suffered, Boudreau's been forced to play more specific roles out of trust - and old-man Koivu with as many goals as young-man Palmieri against top forwards in the league makes it very hard to disagree with the coach. He needs more from his secondary scoring options.

Without getting into it too much more, yes - a better PP rate usually covers this secondary scoring issue up. But it's also a bit of a chicken-egg argument because better secondary scoring usually boosts the PP. Ultimately, ALL players not making 8-mil per have to start scoring at any state before PP rates rise. They tend to follow the same path.

I didn't even get into the defense YET, but I can't complain about that too much since Boudreau's done pretty good with it when Plan A went to hell in the offseason. In today's cap era, there's not really a way to buy a team out of a problem on the blue.

But here's the defense if you want to see: 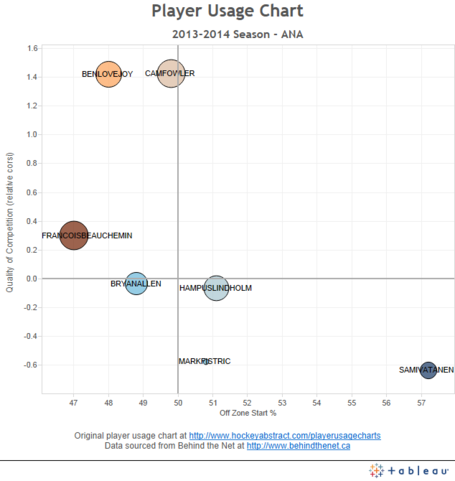