It can't get any worse, can it?

I'm not usually one to curse, but after the game against the Calgary Flames, I think everyone can cut me some slack...So I am apologizing before I continue on for very unladylike language in the following paragraphs.

I am still trying to figure out how to even begin this preview because I am still so utterly disgusted by Wednesday night's abysmal performance (if you can even call it that) in Calgary. I hope each and every Anaheim Duck, from the coaching staff all the way down to back up goaltender were thoroughly embarrassed. Because that is what it was.

"There's not much to say. We played like [garbage]. I think every guy in the room should be completely embarrassed about how they played tonight. Every single person. To start a road trip, one of the biggest road trips and have a division rival chasing you down and have a ton on the line, it's ridiculous how we played tonight."~Andrew Cogliano after the 7-2 loss to the Flames Wednesday

Yeah, he definitely did not say "garbage" because "garbage" is a big understatement. "Sh**" is more fitting.

And just when you think things couldn't get any worse for the Anaheim team...

Patrick, you took the words right out of my mouth.

The last time the Anaheim Ducks and the Colorado Avalanche met (season opener in Colorado), it ended in absolute disaster for the former. Actually, up until the last whatever-the-[insert expletive here]-that-was in Calgary, this game was probably one of the worst shows for the Ducks

What was the score, you ask? In the end, the score was trivial....None of us really remember the numbers of the blowout. [Ed Note: I remember. Very vividly. -Kyle] But I'll tell you what we DO remember....

The sh** show in Colorado was at the very least overshadowed by Roy and his Royish sideshow in his NHL coaching debut.

Oh, and the score was 1-6 for all you who really don't remember or who have done your best to shun away those memories.

The Ducks are coming off 4 straight losses, while the Colorado Avalanche have won 6 of 8 since the Olympic break. While the Ducks were being straight up dismantled by the Calgary Flames, the Avs were playing their best win to another two points from Chicago, leapfrogging into the No. 2 spot in the Central Division.

Keys to the Game: 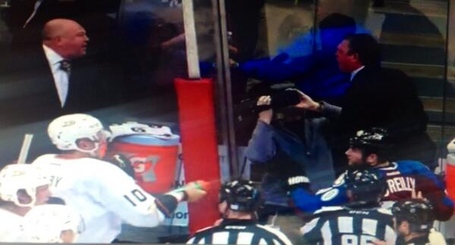 via pbs.twimg.com-Let 'em have it Corey Perry.

Where do I even begin?

The Ducks can do no more wrong at this point (I hope), because they've done it all in the past couple games. I am not so concerned about the opponents' play, because right now, the main concern lies with the Anaheim club itself and the decisions made by the coaching staff.

Let's start with hockey 101 shall we? Puck possession, crisp passing, time spent in the offensive zone, scoring goals, winning board battles, good goaltending, responsible defensive play...I can go on and on.

Despite the early season success, the Ducks were criticized for their low puck possession stats. Fortunately, it wasn't so much of a problem since the Ducks were scoring so many goals that the scoreboard was tilted in their favor. Unfortunately, like all things, what goes up must come down--and it sure came crashing down. Ducks have been extremely irresponsible in their d-zone AND o-zone, and have run out of ammunition to right the wrong. Sloppy passes, stupid pinches, bad positioning, no traffic, board battle losses, etc. all attribute to crap we've been seeing of late.

I can list tons and tons of "keys to the game" points. But it all comes down to the Ducks. The Ducks know what they need to do. They are professionals. They get paid to do this for a living. They can't just stand around and talk about it. Show up to the game, stop playing scared, and start playing hockey. Goaltenders can't allow 3 goals on 5 shots. Defense can't get caught in stupid pinches. Ryan Getzlaf can't be -4 by the end of the second period. You just can't allow two shorties in one game. I can go on and on. These are the results of just crap and careless play. I hope the Ducks were thoroughly humiliated last night--so embarrassed that they are done with this sort of play. Because I know I sure am.

In addition, Bruce Boudreau needs to [friggin] figure out what he wants to [friggin] do with his lines. Yes, juggling can work to spur some offense at times, but inconsistency is just killing the Ducks here.

What Can We Learn From this Game: I'm not even going to get into the whole "It's because we traded Penner" matter. Clearly the problems the Ducks have run much deeper than the loss of a forward.

At this oh-so-very-low point, the Ducks need to learn to dig themselves from the hole/pit/chasm/abyss in which they have found themselves. Call me dramatic, but despite the season record, the holes in the Ducks' defensive play have been nagging some of us all season long. Wednesday was by far the worst the Ducks have played defensively all season...and yes, the Ducks have had their share of bad defensive showings. Earlier, the Ducks were always fortunate enough to have the offense erase bad memories by lighting the scoreboard. Now without the goals, the reality of how bad the defense truly is is beginning to show. In this last run of the season, teams are playing their best hockey as they scramble for points and tear each other apart for a playoff spot. The Ducks on the other hand are simply scrambling around the powerplay or floating around in their defensive zone. The cracks have begun to appear.

Thank God they have picked a time where there are still 16 more games left in the regular season to work it out. Honestly, no better time to re-right this crashing, burning, and sinking ship. Because it only gets tougher as post-season gets nearer.

One upside that we might look forward to...the last time the Ducks were shellacked this badly (against the Avs in the season opener), the Ducks came back the next game and started a win streak. Here's to hoping.

Fearless Prediction: Ducks continue to screw up the man-advantage. So Bruce Boudreau turns green, goes stark mad, tears down the glass between benches and pitches Roy over the boards and into the goal. He turns around leering at his players and roars, "This is how you make a [beeeeeeeping] goal."