Hopefully not foreshadowing a playoff match up (at least not the first round).

Share All sharing options for: Ducks/Kings Preview: Crash. The. Net. 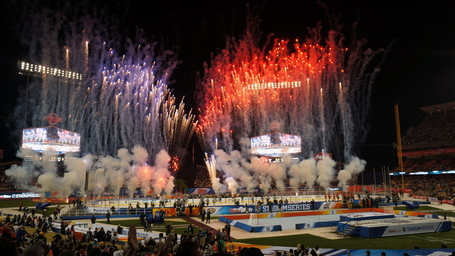 Oh, that's right! The Ducks shut out the Kings 3-0 at Dodger Stadium and earlier in that week they beat Los Angeles 2-1. However, at the time the Ducks were just beginning the longest, most mediocre stretch of their season which they're currently struggling to escape from. The Kings, on the other hand were in the middle of a 2-8-0 stretch heading into the Olympics and have since lost only one game (Thursday night against Toronto 3-2).

Keys to the Game: Offensively, it's pretty obvious that the Ducks need to play more like they did in Colorado last night than they had for the previous week or so. It's all about getting to the net against the Kings. The only goal the Ducks have scored against LA this season that was from more than two feet in front of the crease was the empty netter at the end of the outdoor game. Expect to see lots of Patrick Maroon on the top line with Ryan Getzlaf and Corey Perry. They were able to get to those areas pretty well against Colorado, but that won't necessarily do it against a Kings team that sits atop the league in goals against per game (2.06).

They'll have to be much better defensively as well. That will be difficult with Cam Fowler listed as day-to-day and as such is unlikely to play after leaving the game last night with a lower body injury. According to Eric Stephens' twitter feed yesterday, Stephane Robidas was not expected to make his Anaheim debut against the Kings, but it is possible the injury to Fowler might change that.

I've mentioned the last two games against Los Angeles already, but we can't forget about the disgusting first meeting between these two teams in which the Ducks were out shot 51-28 and corsi events were a staggering 103-53 (66%) against the Ducks, and they somehow managed to make it to the shootout before losing. Allowing them to possess the puck that much and hanging on by the skin of your teeth is a recipe for disaster, especially considering the way that the Kings have been able to score much better than earlier in the season.

Just as much as getting to the net will be a key in the offensive zone so will puck recovery in the defensive zone. Get those pucks and get them out of the zone on the first try, preferably with short passes and/or skating. Simply clearing the blueline isn't enough (except on the PK) that will just allow the Kings to reset and wash another wave of pressure over the Ducks' defense.

What Can We Learn From this Game: With ZERO margin for error in the division race, the only thing we really want to learn is whether or not the Ducks can pull two points out, but every game against the Kings is a massive test for the Ducks. LA plays that physical, defensive style of game which exemplifies playoff hockey. It's not the only, or maybe not even the best way to beat the Ducks this season (for my money that would be Dallas' speed game) but it is certainly something that they have had problems breaking down in the past.

Fearless Prediction: The Ducks will end the night still on top of the Pacific Division. Actually that's not a prediction, it's mathematically guaranteed, but that's as far as I'm willing to go on this one.