Numbers for Nerds: A New Way To Consider Special Teams

Anaheim has not been playing well as of late. And that's due in large part to positively dreadful performances from the power play and penalty kill units.

Share All sharing options for: Numbers for Nerds: A New Way To Consider Special Teams

It's no secret that Anaheim sucks donkey scrotum with the extra man right now.

Despite the fact that the Ducks sit at 21st in the league with a season average of 16%, it feels like close to three or four eternities since this team has scored with the extra man, making that number feel slightly high.

So why are we still considering this as a 16% unit that's not the worst in the NHL at the moment? Watch it once. It clearly is. The Ducks failed on a whopping six opportunities last night against the Capitals. Granted you can attribute the Ducks second goal to the power play as the Capitals player had not yet left the penalty box when the goal was scored. However, I use this as the karmatic balance for the fluke power play goal against Montreal which to this point still stands as our only marker since the Olympics. That one really shouldn't count, and the Washington one should. Balance.

Thus I present to you a new argument for your consideration. I firmly believe recent form is a better indication of special teams potential than the season average.

To illustrate my point: check out this handy dandy chart I made in Excel, showing 5, 10, and 15-game rolling averages for the Anaheim power play. 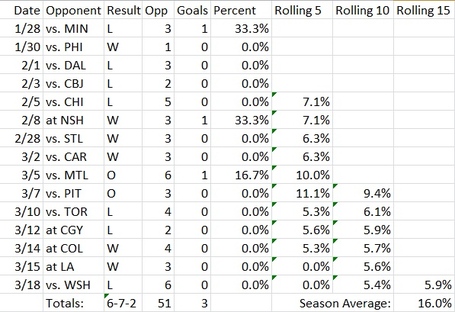 Yeah. That is ugly.

To boil it down, it essentially demonstrates that the Ducks power play over the last 15 games has been complete rubbish, playing at nowhere near even the paltry level their season average indicates. If the Ducks were playing true to form and skill level, they would be clicking closer to their 16% average over the last 15 games, and not at their abysmal 5.9% mark.

I made the same calculations for the penalty kill as well. 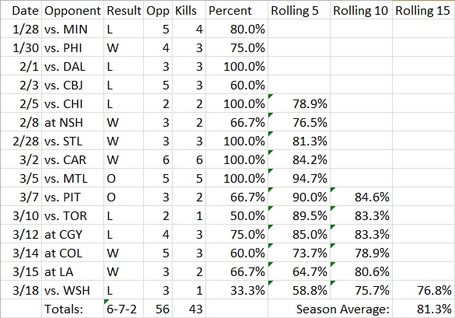 Notice something here: the Ducks penalty kill, which kept them afloat so often when the power play has failed miserably, has now allowed a goal against in six straight games. So while we've been clicking at 81.3% on the season (19th in the league), the Ducks have really been a miserable 58.8% over the last five matchups. That's nearly a goal every other time we take a penalty.

Then there's what I like to call Bowman, which adds the power play and penalty kill percentages together. Ideally you want to be around 100 to be called "adequate" to be competitive on special teams. Over the last 15 games the Ducks Bowman sits at a paltry 82.7, indicating a remarkable ineptitude in special teams. Anything lower than a 90 needs serious work.

However, if we shrink the sample size even further and go into the immediately recent form, the Ducks Bowman falls to a positively alarming 58.8.

To put it into perspective, the league-worst in both power play and penalty kill Florida Panthers have a season Bowman of 85.9.

If you're a podcast listener, you've heard me say that it's possible to win a Stanley Cup without a power play, but it's impossible to do it without a penalty kill. Right now the Ducks clearly have neither.

@ackylenicolas ANA has 93.4 PDO on PP. 2nd lowest in NHL. Pretty much explains it w/out charts.

Let me lead off by saying I think PDO is an extremely wonky and unreliable stat to begin with. While there are trends with champions being right around the 100 mark, indicating a balance between goaltending and scoring, there are always teams who continually violate this curve and succeed despite all statistical "evidence" pointing to the fact that they should be doing exactly the contrary. It's trying to numerically quantify "luck" based on the fact that all teams go through peaks and slumps throughout the course of a season.

Taking that stat and shifting it to a situation like the power play makes the connection even more unstable and arbitrary. My biggest argument for this is that PDO treats every chance and shot on the power play as though it were of equal quality and value. So thus the PDO argument is that the Ducks are getting chances, and by that same token should explode and suddenly begin scoring by the bucketful with the extra man any day now.

At this point with the level of ineptitude Anaheim has shown throughout the season with the power play, I think it's safe to say this is beyond "bad puck luck." This kind of form comes down to the personnel being incapable of executing on the power play. While the team on the ice hasn't looked totally inept on some of their opportunities (admittedly they've been downright horrid on others), the opportunities particularly late in the game are usually so lackluster because by that point the opposition has had a few periods to adapt and the Ducks have failed to get creative and earn their chances from anything other than a few overused set plays or poor quality shots from bad angles.

There is no "bad luck" when the team on the ice is incompetent in its task.

Take these numbers how you will; I'm not a statistician or a mathematician of any sort. I simply offer the argument that we should consider recent form of special teams when trying to analyze performance and potential. There's no questioning the frustrating rut these units are in.