One-two, games are coming for you... 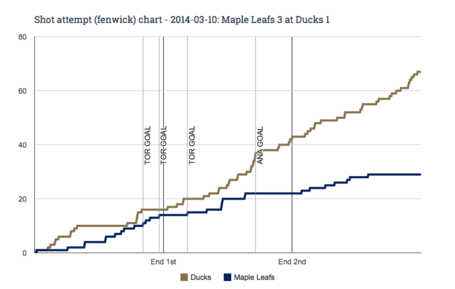 It didn't matter what the Ducks did, the Leafs were going to win this game. As team after team has found out this season, you could play the nearly perfect game against Toronto-it doesn't matter. The Leafs have their own relationship with probability fields and science that the rest of us haven't figured out, and it's called improbably consistent super elite goaltending that busts groins and is bound to, eventually, falter. Until it does: hahaha yeah, whatever hockey. 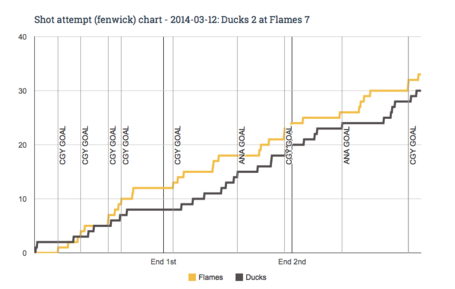 I want to say that this is the worst game of the season, but I can't, because it wasn't. The secret of the Flames is that they actually play a surprisingly decent system. What they lack is high-end skill, and it usually shows in their inability to score tons of goals. That wasn't the case on this night, as Ducks goaltending checked out like ten minutes in, but overall it's about true for them on the year. In fact, my three surprise teams this year have been Tampa Bay, Dallas, and Calgary-a view I held even before this game occurred.

Consider this of Calgary recently: they trounced the Ducks, played the Kings pretty closely, embarrassed the Oilers, and just beat the Sharks in a shootout. This team plays hard, and they play smart. They are cashing in on some points during a stretch when the playoff-bound teams are tinkering for a run by sticking to a simple, blue-collar formula. Teams with the Flames mentality are truly "tough to play against," as they say.

Let's also remember that while the Flames played great, the Ducks played into a classic trap: first road game away against a "lesser opponent" after a disappointing loss in which they furiously outplayed another lesser opponent. (This is one reason why home teams are generally favored more heavily on a opponent's first game away.)

The Ducks should have dominated this game territorially and didn't. Their goaltending met a predictable dip, as even the most consistent goaltending tandems will do during a season (hopefully just not in the same game), and the Flames countered with high energy play. 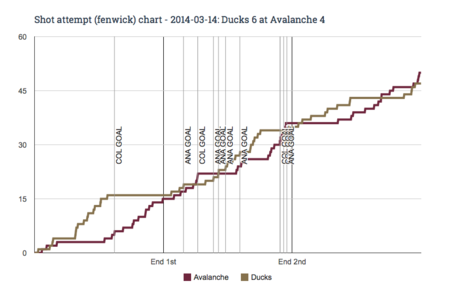 This game wasn't a "good hockey game" in the strictest sense of the phrase. Oh sure, the Ducks finally bucketed more than two after a stretch. This was a game in which two teams demonstrated a very fierce allergy to defense-particularly in the slot.

Now full marks go to the Avs here, because they penetrate the slot against teams who normally control it much better with surprising ease. In that respect, credit the Ducks as well for hanging with that style of game.

But for the love of god, Ducks, figure it out. Defense controls games, not offense. The playoffs are about limiting chances-and everyone talks about Corsis and Fenwicks and pizzas but not about HOW those things matter. I mentioned it here very early on though: it is about gap control without the puck (erasing space) and finding gaps (making space) with the puck.

The Ducks have trouble containing teams who can penetrate the slot with speed. They do well enough hemming in stronger possession teams on the perimeter-still a very dangerous game to play when one bounce can change a game. Even if Anaheim can recapture the top slot in the Pacific, going up against a team attacking with speed-like the Avs did in this game-has to be alarming.

And that's not to speak of a team like the Sharks, who play both styles at once. 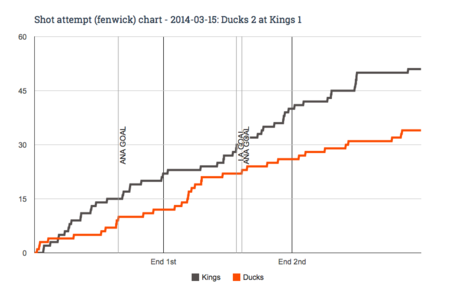 Boudreau has a preference against heavier forecheck/dump-in teams (Kings, Blues) that tends to yield positive results despite what the end possession numbers look like. I'll probably solidify my impressions of it outside P-Mets, but it basically accepts dumps and clogs up off-wall play to put the puck back into the slot.

Against the Kings twice pre-Olympics and the Blues once after, it worked to plan. In this game, Sutter had his troops carry the puck in a lot more frequently after one period, which differs from their usual dump-in/retrieval/low-wall game. Doing so allowed the Kings to have a stupid number of slot chances-and one night after playing the Avs in the Slot Showdown, it makes sense.

The Ducks probably earned about as many chances as they usually do in a game, but they forced the Kings to change how they played after one period in order to generate more offense. Against the Kings, who nine times out of 10 will outshoot a team, limiting their possession while getting some chances is a good thing.

But that slot coverage...geesh. Over half the Kings final frame shots on goal ended up being entirely too close to Andersen, who absolutely 100% won this game for the team.

So there was good overall and bad overall. Ok. 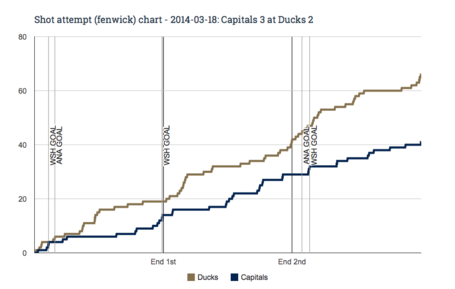 Special teams lost the Ducks this game. Not converting on some ample man-advantage chances came back to bite them when Ovechkin put one in on the Caps' PP.

I can't even be mad at this game though. The Ducks played well overall, especially at evens. Losing a game via special teams this late in the season is less troublesome with a playoff spot more or less secure, especially against a team that wins games by sniping with an extra skater.

The penalty kill needs to be sharper. But it sorta makes sense that it isn't tip-top right now, when guys are actually less inclined to kill their bodies to stop pucks going in-whereas in like 10 games they will take pucks to the face to prevent them from going through. This is a little normal.

Furthermore, the power play in the playoffs is less about cashing in and more about turning momentum. Shoot more, shoot often, and prevent the other team from trying to score. The net result is a team who just defended for two minutes and is more likely to make a mistake at evens.

And whatever goals do come on the PP are only pluses.

Anyway, the reason the Ducks PP isn't as nifty now is because they take fewer shots. I think it has to do with not having a point shot presence, but again I'll probably get into this again in another forum. Here's a chart: 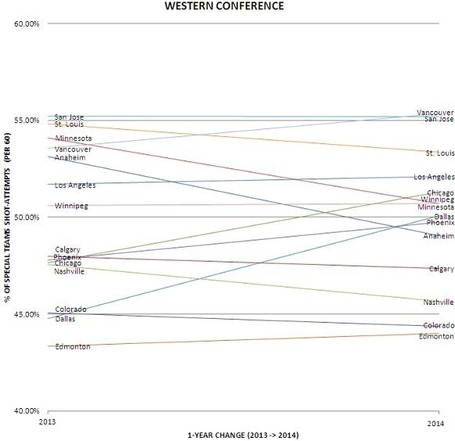 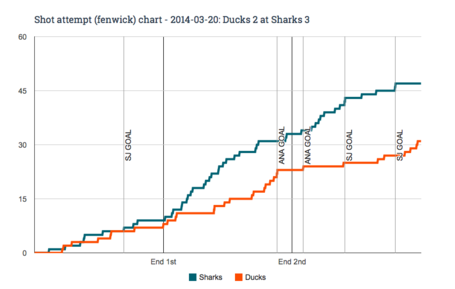 The Sharks are really good. When they drop Joe Pavelski to the third line, game over rest of league. It isn't even fair. Look at the beginning of the third period until about midway through. San Jose played with the puck, and Anaheim chased and chased and chased.

Some of this is natural score effects. At the top of the last frame, the Ducks went ahead. Every team opens up to create more offense when trailing. Unfortunately for Anaheim, SJ played and played and then scored and then just kept playing. The Ducks were floundering a bit by that point.

Here's what I take from this game: Boudreau really, really loves this Sharks team. Some of his usage and deployment and systems suggest he wants the Ducks to play how the Sharks play-which is great. The Sharks play the game very well. They suppress attempts against and generate wave after wave of attempts for when matched up against everyone.

Sadly, the Ducks need one or two more pieces to be able to play like the Sharks. So, my net impression is that the Sharks are a good team to want to be like and it is ok we aren't them now. For now, we'll try to win like the Ducks. But the next few Boudreau-coached years figure to be very, very fun if he gets the right players.

Anyway, two weeks of games. I don't know what I'll do next week. Maybe look at slot chances, since I've been tracking them more frequently. Who knows, the pizza is available for any topping, any time.