The Anaheim Ducks got off to a fast start and led the whole way as they retook the lead in the Pacific Division with a 5-1 victory over their freefalling division rival Vancouver Canucks.

First Period Recap: This one didn't take too long to get going. Almost right from the puck drop, you could get the feeling that this one was going to be a high-pace, offense filled affair with a good chunk of grit. Before the game even began, Corey Perry was apparently already jawing with Canucks forward Zach Kassian, after Perry stopped Kassian's attempt to shoot the puck into the Ducks net at the end of warmups. So pretty much, typical Perry stuff.

The first penalty of the game came just over two minutes in when David Booth hauled down Rickard Rakell, who drew back into the lineup after looking dangerous for a couple games now.

Predictably, the power play did absolutely nothing.

They did get a golden opportunity when Corey Perry walked out from behind the net all alone and ripped a shot off the near-side post over Eddie Lack. The rebound then bounce back to Perry, who nobody in blue decided to move to, and ripped the shot off the other post. Two posts in one shift.

If anything those consecutive posts just mean Perry will score later. Perry will not be denied when he wants a goal.

The Ducks did however get on the board first about five minutes later. Patrick Maroon recovered the puck with some strong offensive zone pressure and fed a pass to Sami Vatanen at the point. Rather than shoot, which almost everyone on the ice thought Sami was about to do, Vatanen sent a pass to his partner Luca Sbisa, who blasted the puck through a multitude of bodies and right through the five-hole of Vancouver goaltender Eddie Lack.

The goal was Luca's first of the season, and no doubt has to be a great moment for him after struggling with injuries and inconsistent play for much of the year.

Barely over a minute later, the lead expanded to two when Matt Beleskey ripped a wrister over the blocker hand of Lack after Rickard Rakell did an excellent job to recover a rebound and send a sweet little touch pass backwards between his legs.

It looked like maybe the Canucks were waking up when just minutes later they shaved the lead in half. After the Ducks failed three times to clear their zone after gaining possession, the Canucks finally made them pay when Frederik Andersen left a rebound off to his right that a perfectly-positioned Brad Richardson banged home.

The Canucks never amounted much more in the way of significant pressure on the Ducks, and the period ended with Kassian getting tangled up with Patrick Maroon, and while both players dropped their mitts, no punches were thrown and both were simply given coincidental minors for roughing.

The period ended with the Ducks leading 2-1 and outshooting the Canucks 8-7.

Second Period Recap: The intermission snapped the Canucks awake and they quickly jumped all over Anaheim. It was pretty apparent within the first four or five minutes that Eddie Lack would not be getting a ton of TV time in this second period. And as you can see from this chart: the possession game rapidly went back towards the home side. 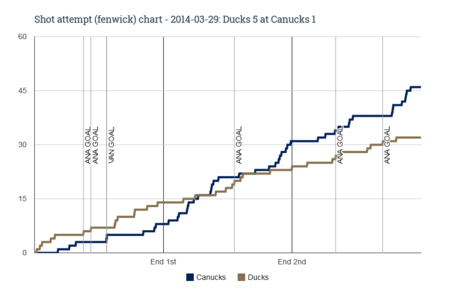 Some of this can be attributed somewhat to fatigue of playing on back-to-back nights, but part of it can also be blamed on the Ducks' trend of awful possession numbers when leading games. And this became pretty obvious when the Canucks registered nine of the first 11 shots of the period. Once the Canucks caught up to the Ducks in terms of Fenwick, they never lost the lead again, dominating the remainder of the game.

However, after surrendering that first goal off a rebound, Freddy Andersen appeared as though he really didn't want to give up any more of them, and pucks started sticking to him like saran wrap to everything except whatever it is you actually want it to stick to.

Andersen had to be sharp early when a puck bounced quickly off Corey Perry's skate and just went wide of the Ducks net, and then had to stand tall on a big point shot from Jason Garrison, which he got his glove hand on.

In perhaps some karma from the hockey gods, just when it looked like Vancouver would find a way to come back and tie the game, the Ducks went ahead and widened their lead.

In almost a mirror reversal of Beleskey's goal, this time it was Daniel Winnik who got to a pass in front of the Vancouver net and sent a backhand feed to Koivu who pulled the puck to his forehand and backhanded it past a sprawling Lack.

Despite being horrendously outshot, the Ducks lead stretched to 3-1 on Koivu's first point since March 7th and first goal since January 30th.

This only spurned the Canucks on further, but despite earning themselves a late power play chance when Jakob Silfverberg inadvertently hauled down Eddie Lack behind the net (read: Eddie Lack took a Daytime Emmy Award worthy dive behind the net), the Canucks couldn't find a way past the Great Dane. The Canucks managed a total of five shots on goal on the two power plays they had in the period, and Andersen stood equal to them all.

The period came to a close with the Ducks getting outshot 15-6, but the scoreboard read 3-1 in favor of the white-clad visitors.

Third Period Recap: The Canucks appeared to be completely deflated by their failure to score at the end of the second period, and didn't so much as muster a Fenwick shot attempt until just under four minutes into the frame. The period started very tentative with the Ducks playing with a strong "visiting closer" mentality: don't make mistakes and play an often-ugly but effective road period.

Not long into the period the fans even started to show their impatience, which prompted a gem of a chirp from John Ahlers on the broadcast:

"The Vancouver fans appear to be so focused on watching the game that they've decided to do the wave."

Whether it was out of sarcasm, or an honest attempt to try to get the Canucks back into the game, it didn't work.

Corey Perry struck for the Ducks just after six minutes into the frame when he followed his own pass into the Canucks goal crease and it sat there after an awkward bounce off of Jason Garrison's skate.

*toots his own horn*

This would prove to be the final dagger for the Canucks as they wouldn't mount much more in the way of a serious attack after this, but Freddy Andersen continued to stand tall and frustrate John Tortorella's bunch.

That wouldn't be all from Anaheim, however, as the Ducks salted the wounds of the Canucks further by capitalizing on the Canucks red-hot penalty kill.

On a play in which the Canucks for some stupid reason sent three players in deep over the blue line while down a man, the Ducks countered quickly and went in two-on-one with Corey Perry and Matthieu Perreault. Perry sent an early pass over to Perreault, who had to take a second to settle the pass, but this gave him the chance to fake a shot and Eddie Lack bit it hard, opening his five hole wide for Perreault to slip the puck through and in.

On a night when the Power Play looked hopeless for Anaheim, it came through on its fifth opportunity to make it 5-1.

And that's where the score would stay.

Ryan Getzlaf left the game with about five minutes remaining after taking a shot off his ankle. While he walked off under his own power and didn't appear to be limping, that's never a good sign.

As of writing this, there has not been an update as to his condition.

The Ducks walk out of Vancouver with a 5-1 win and 5 of 6 points on the Western Canadian road swing. Not too shabby.

The Good: The Ducks played this road game just about perfectly. While they did surrender several quality chances against through the latter half of the first and nearly the entire second period, the defense got into shooting and passing lanes, the forwards picked up loose pucks, and the Ducks did a great job keeping the Canucks out to the side walls. Andersen saw a good number of low-difficulty shots tonight.

The special teams also continue to improve. The Power Play is back to about what it should be clicking at for a season average (25% over the last five games) and the PK has now killed every penalty in its last four contests. All good signs with the postseason right around the corner and a division title to lock up.

The Bad: The Ducks turned a lot of pucks over in their own zone tonight. Vancouver's goal is directly attributable to Andrew Cogliano and Bryan Allen for this reason. About 30 seconds before the goal was actually scored, Sami Vatanen won a huge battle for a puck in front of the net that Cogliano and Allen then carried away... and promptly gave away with a poor pass to one forechecking Canuck forward. The puck never left the zone and the Canucks scored. Allen in particular had two other egregious turnovers where he more or less placed the puck on the stick of a Canuck player below the Anaheim goal line without any pressure on him. Seven giveaways for Anaheim and nine takeaways for Vancouver for 16 Anaheim turnovers. The Ducks have got to take better care of the puck in their own end.

The Ugly: Vancouver is in one hell of a freefall. After making the Stanley Cup Final less than three years ago, this loss was likely the final nail in their playoff chances' coffin this season. John Tortorella is not keeping hold of his team in terms of discipline. The goaltending went from an elite tandem to banking on an unproven rookie. Superstars are demanding trades... and then not getting them. And the team is showing a considerable lack of depth beyond what are now aging beyond-their-prime superstars. Much the same way Calgary declined into rebuild oblivion, it looks like the Canucks are headed there aboard a bullet train.

Honorable Mentions: Stick taps to Saku Koivu, who notched a goal and an assist tonight for his first two points since the beginning of the month for a nice turnaround effort after last night in Edmonton. And another tap to Sami Vatanen who was all over the ice tonight, and not in a chaotic or uncontrolled way. I love Sami's aggressive play style and blinding speed, but it's often times gotten him into trouble by overextending or pinching at a bad moment. He was almost perfect in that regard tonight, showing remarkable improvement.

3rd MVD: Corey Perry was dangerous all night long. After hitting two posts on consecutive shots, you just knew he was going to score. He was doing his thing, running his mouth, and snooped around in the seams of the Vancouver system, and he made them pay with a two point night.

2nd MVD: Matthieu Perreault now has an eight game scoring streak going, including nine points in that span, six of them goals. A lot of people say the Ducks are a one-line team, and he's making a darn good case to the contrary.

1st MVD: Frederik Andersen was a great ginger wall of not allowing goals tonight. Equal to 31 of 32 shots, including five on the power play and two dangerous shorthanded chances, Andersen kept the Ducks afloat when the team was struggling. This performance only adds fuel to the fire that is the debate over who gets the Ducks net in the playoffs.

Next Game: Monday, March 31st at 7PM vs. Winnipeg Jets