There was one game this week and a ton of trades on the day I wrote this so yeah, here. 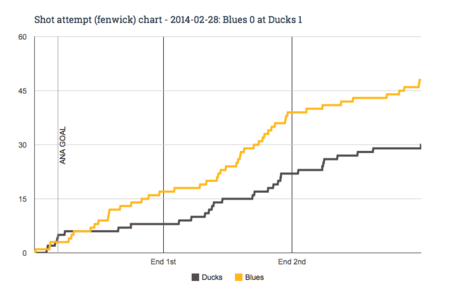 I approach this game with a bit of apathy. The win is huge - I love that. The stats aren't favorable - I don't love that. But I also give it a pass because it was the first game back from a break and because it was against a stellar defensive team who had a game under their legs going into this one.

Furthermore, I thought the battle of limiting chances favored the Ducks defense slightly more than it favored the Blues offense. Chances, if you aren't aware, are harder to track than pure attempts. But basically, chances are shots within the "lightbulb" (goal line from net out to face-off dots, with a curved line of about three feet out connecting the two high). Some add in any rush, odd-man opportunity despite where the shot is eventually taken as well as shots from the point with either a screen in front of the goalie or a player moving through the lightbulb (potential for redirect).

Anaheim suppressed quality chances for St. Louis more than I thought they would, which is at least one encouraging thing to take from the game when you look past the win. The key to good possession here is that having the puck means the likelihood of creating more chances. We want to see more of that going into the playoffs, where creating chances is harder. It is tough to play a preventative game all the time, so this was a great reminder for what the Ducks will face for the last 20-ish games.

Dustin Penner is out to Washington for a pick flipped to Dallas for Stephane Robidas, a right-handed defenseman who plays top four minutes. Robidas is awesome, so this is 100% a positive (to me) going into the playoffs. He's played with some real iffy partners the past few seasons and still has even-to-positive numbers, plus he plays with a sort of physical edge that's useful in the playoffs. I don't even need to spend more words on this. He's great, yay home team.

The Ducks really want another center or a winger. Not just any center or winger, but one designated to score some goals. Goal-scorers are in demand in this league, so the cost to acquire one is of concern to us here, in fandomland. The two most likely trade targets are Emerson Etem and Sami Vatanen. This makes us all understandably nervous.

But the ones the Ducks would prefer are Luca Sbisa, Kyle Palmieri, and a role player like Matt Beleskey - the commonality being they each have a bit of salary attached. It's not entirely unforeseeable to think Stefan Noesen's potential could be touted for trade, although conversely if his top-end potential makes Etem a runner-up, losing the latter may not hurt as much. (Noesen projects to be a legit scoring winger, at last check.)

The theme here is salary, on which Anaheim has an internal cap. So while we fear we're losing all our young guys, I doubt any deal happens without someone with salary going back. Ideally, I'd like to keep the youth, but sports are great and Roberto Luongo just got traded so I'm done here. (Holy shit.)