This one was hyped up to be a playoff-like game and it didn't disappoint. Cam Fowler made his return to the lineup after being out for what seemed like an eternity (actually 12 games). Bruce Beaudreau decided to go with John Gibson in net as Andersen was out with some type of head injury (Shea Weber bullet to the mask) and Jonas Hiller hasn't impressed lately. The Ducks looked like they were ready to play from the drop of the puck.

The first play was a steal by Bryan Allen in first minute (HAHAHAHA). After a few Anaheim flurries in the San Jose end, the Sharks came back with lots of pressure early. Matt Beleskey was taken down in front of Niemi, no call. Beleskey got up and went crashing in on the forecheck. The Ducks defense was pinching in on the attack early in the game. Logan Couture took a big hit from Stephane Robidas. Nick Bonino, Kyle Palmieri and Daniel Winnik worked their entire first shift in offensive end.

San Jose was scrambling a bit with Anaheim buzzing. Gibson made his first good save on a Pavelski shot and rebound chance. The first penalty of the game went against Brent Burns for interference. He hit Koivu in the slot without the puck. A clear after a faceoff win for Sharks slowed the power play. By the way, the Sharks are the No. 1 faceoff team in the league.

Fowler was on the No. 1 power play unit with Ryan Getzlaf on the point. Corey Perry, Mathieu Perreault and Patrick Maroon rounded out the rest of the power play team. Perreault's shot down low was saved by Antti Niemi and the rebound escaped the zone. Lots of blocked shots by the Sharks, but they were definitely taking some damage.

The Sharks killed the power play, but the power play wasn't its usual disappointment – getting a few good looks on Niemi. A too many men on the ice penally slowed the Ducks' momentum immediately after failing on the power play. Gibson made the first save on the  power play after a minute had already been burned off the clock. A few clears later, the penalty was killed and Palmieri was on a two-on-one that he took the shot wide on. Getzlaf managed a quick pass to Beleskey but Niemi shut the five-hole just in time.

Fowler's skating looked perfect in his return. Jakob Silfverberg just missed on a backhand rebound try. At the same time there was no call as Cogliano was slew-footed sliding down the wing. The very next shift, Couture stumbled and Lovejoy went to the box for tripping. The Sharks' second power play was much better. Gibson was making a ton of saves early on in the power play. He got lucky when the Sharks hit the post. The Ducks survived and went back on the attack. On some type of horrible bounce Gibson held his hand up for an icing call but he didn't get it. The Sharks scored on an awkward rebound off the end boards to open the scoring.

With just seconds left on the clock, Perry blew by the Sharks defense and scored five-hole on Niemi.

Just 2.1 seconds remained after Perry's goal. Fighting ensued after the faceoff. Shots were 12-11 San Jose and Getzlaf and Beauchemin would be sent to the box along with James Sheppard. Sharks were to start the second period with a power play.

San Jose started the period with a five-on-four power play. A huge save by Gibson laying on his stomach kept the game tied. Gibson made great use of his stick to stop a cross-crease pass that could have been dangerous for the Sharks. The Ducks killed the penalty and Getzlaf flew out of the box. Perry nearly scored on a swift passing play with Getzlaf. He almost capitalized on the rebound with a wraparound chance. After coming close to untying the game twice, Perry was taken down away from the play with no call drawing an angry chant from the fans.

Drew Remenda on the NBCSN broadcast said Teemu Selanne was playing against his former team and this seemed to spark him. Selanne took a quick shot toward Niemi that went wide for Maroon to score on a quick wraparound attempt.

(And that's what you get when you call Selanne a former Shark.) The Sharks came back strong and Gibson was scrambling to find the puck. Luckily, the Ducks were playing amazing defense in front of Gibson and one of the bodies in front managed to clear the zone. Silfverberg chased the puck down on short breakaway and took a shot that Niemi bocked. A scramble in front of the San Jose net led to a penalty against the Sharks.

The Ducks' second power play was less effective than their first. The best chance was when Selanne used his speed on a wraparound attempt that Niemi stopped with a toe save. There were lots of shots on goal for the Ducks, but no goal came on the power play. Right after the kill, Couture scored on a miracle snipe from the dot that Gibson was screened on all the way.

The Ducks still continued to pressure after the goal. Maroon received a perfect pass from Selanne to score his second of the game and 10th of the season.

Niemi was immediately pulled for backup goalie Alex Stalock (masterton trophy nominee for Sharks). Selanne got his second point of the game on the primary assist. The Sharks tried to rebound with a flurry in the Ducks end while some tired Ducks were on the ice, but the Sharks hit a post and a scramble ensued. The puck trickled over the blueline and the Sharks took it back in offside.

Gibson stopped another cross-crease pass with a nice stick play. Maroon, Selanne and Perreault had been the best line in the period, but the best goal of the game came from Beleskey. He gathered a pass and pulled off a beautiful toe-drag around a stickless and diving Brent Burns to put the Ducks up by two.

Even after going up by two, the Ducks continued to put the pressure on. Unfortunately, Beleskey took a penalty for "slashing" Joe Thornton. Even the Sharks' announcers were calling it "dressed up." The Sharks were on the power play in the final seconds of the period. Robidas made one final block before the period ended.

The Ducks still had about 1:30 to kill off to start the period. Andrew Cogliano had a two-on-one break on the penalty kill and chose to shoot the puck. Stalock made the pad save. Anaheim's penalty killing was excellent the entire game and they managed to make killing the penalty look easy. After winning a faceoff, Perry took the puck off the faceoff dot to the font of the net and Stalock made one of his best saves.

Down by two goals, a little over five minutes into the third the Sharks were really pushing. Hampus Lindholm, as in Canucks game, was making some great defensive plays. On a transition play, Perry passed to Getzlaf, but the puck trickled off his stick. The most dangerous play of the third period for the Sharks was a Joe Pavelski shot that Gibson took off the mask through traffic. The teams were exchanging chances a bit. Palmieri dragged a Shark down with this being an obvious makeup non-call.

The Ducks were really clamping down defensively with just over 10 minutes to play. Silfverberg's quick shot from below the circle was just picked off by Stalock. Couture had a pass trickle out from behind Gibson that he missed the net on. Gibson made another save in close on Tommy Wingels. Stalock got run into by Jason Demers and he accidentally shot the puck over the glass.

The Ducks made use of the power play by killing two minutes off the clock while resting Fowler and Ben Lovejoy. A high stick nailed Winnik in the corner and there was no call on that. It didn't really matter though, as the Ducks were cruising through the final five minutes. Short shifts for everyone down to the three minute mark. The Sharks were being forced to the wing on every attempt, and with 2:49 they pulled their goaltender on an offensive zone draw. A penalty on Bryan Allen for slashing Couture's shin pads (breaking his own stick) made it interesting down the stretch. It was somewhat of a good penalty since there was nobody covering Couture who had a gaping net to shoot at. An empty net goal by Silfverberg clinched the Pacific Division for the Ducks and Honda Center exploded with joy.

The Good: The Ducks are the first team to win the newly realigned Pacific Division championship. They avoid Los Angeles in the first round, and the team continues to try to put Hooters out of business with another five-goal performance. Also look at this:

Hey @AnaheimDucks, you should frame this chart (via @ExtraSkater). Shows how dominant the team was tonight. #ANAvsSJS pic.twitter.com/ei4eu5b8sk

The Bad: There wasn't much not to like about this game. If you want to get picky I guess you could say Gibson could work on his rebound control, but there's not much else. 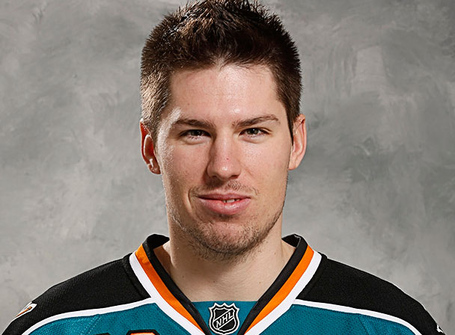 Watching this guy snipe a goal on John Gibson. Nobody should have to watch that.

Honorable mention: John Gibson for his second NHL win and 36 save performance.

3rd MVD: Teemu Selanne – Selanne was a plus-2 with two assists. He almost had a wraparound goal on the power play and was on the most dominant line for the Ducks.

2nd MVD: Corey Perry – Without Perry's late-first period goal this game could have gone terribly wrong. The Ducks outright dominated the first period and it would have been horrible to be down by one after playing so well. He had two points of his own and crushed a few Sharks while on the forecheck.

1st MVD: Patrick Maroon – His game-winning goal chased Antti Niemi. With two goals in the game, Maroon was easily the most dominant player of the night. He fought off Sharks with his size and displayed his puck handling skills with some nice passes and work on the power play. This tweet speaks for itself:

#MAROONAMANIA WILL LIVE FOREVER BROTHERS! Say your prayers, do your training, take your vitamins and believe in the Ducks!

[Ed. Note:  Also honorable mention to Antti Niemi for letting in two soft goals in the biggest game of the season -CK]