The Callies - AC's End of Season Awards: Best Performance of the Season

As we approach the final two days of Callies voting, we turn now to the "Best Picture" of sorts: the decision of which game this season was the Ducks best of the year?

Share All sharing options for: The Callies - AC's End of Season Awards: Best Performance of the Season

This category is going to be brutal to choose just one.

With now two games remaining in the season, we take a look back with the question of the hour becoming "What game this season was the Ducks best?"

To put it into perspective, this list started with ten nominees. I've managed to shrink it to seven. But the choices for this year's best game are some absolutely incredible displays of skill, teamwork, and the sheer firepower of this year's Anaheim Ducks squad.

Have fun trying to choose a winner because I don't even know if I can.

And the nominees are:

For one game, the Mighty Ducks returned for a 1993 reference filled night that screamed minor-league gimmick night, but was in reality one of the most awesome games I've ever experienced.

And the team turned in a performance for the record books.

The Ducks scored just 27 seconds into the game when Corey Perry ripped a shot off the faceoff past a prone Craig Anderson. It would be his first of two on the night.

Speaking of Andersen, the Ducks chased him out of the crease less than five minutes into the game. Backup Robin Lehner came in and faced a barrage for the rest of the night as the Ducks would pound the Ottawa net with a mind-boggling 56 shots on goal, a new franchise record, just one of many that the Ducks would break this season.

Need any further proof? Just look at the Fenwick chart from the night. 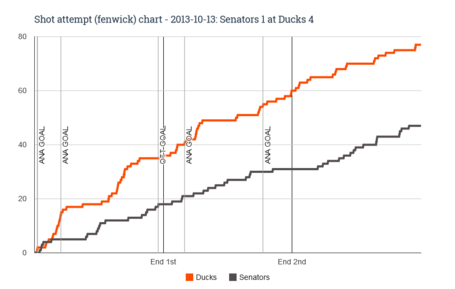 December 31st, 2013 was a night to remember for the Anaheim Ducks.

Two days removed from the San Jose Sharks ending Anaheim's franchise-record 10-game win streak, the Ducks sought revenge in their first of only two meetings this season at Honda Center.

While the Sharks would score first, the Ducks would come away winners, as they answered the bell of adversity and put together a remarkable team effort.

The game was perhaps highlighted by Ben Lovejoy's amazing bailout of Jonas Hiller, who got caught stranded out of the net by the Honda Center Gremlins. Joe Thornton probably still can't believe he didn't score.

Despite Anaheim getting outshot 17-8 in the first period and then 11-5 in the third, the second period would be the source of an explosion and arguably Anaheim's single best 20 minutes of the entire season.

The Ducks would score three goals on 25 shots in the second frame, chasing Antti Niemi from the net.

The win would be the Ducks 11th of December, tying a franchise record for wins in any calendar month.

Oh and how beautiful it was.

The Vancouver Canucks entered the night clinging on to one of the wild card spots in the west as the California teams, much to their surprise and really nobody else's, had shot off in the standings.

Less than 24 hours after the 'Nucks lost a hard-fought battle up the freeway in Los Angeles, they ran into the Ducks at Honda Center.

And they were clearly not prepared.

The bloodbath opened less than five minutes in on an Andrew Cogliano goal, and the Ducks scored two in the first, four in the second, and three in the third to set a new franchise record for most goals in a single game: nine.

Vancouver's only goal of the game was an absolute joke and should have never counted due to blatant goaltender interference that the idiot of a referee somehow allowed to pass.

But perhaps the strongest reason for this game's nomination beyond the score was the sheer dominance Anaheim displayed throughout the game. Every time Vancouver tried to mount some form of pressure, Anaheim would quickly stomp it out and go right back to controlling the game. No matter how hard Vancouver tried, Anaheim was just on an entirely different level.

To this day, this might be the single best full 60-minute effort the Ducks have put in this entire season.

It may not have been super pretty, but the Ducks managed to overlook the dramatic pomp and circumstance of the first ever outdoor NHL game in the state of California to come away with a 3-0 shutout win over the Los Angeles Kings in front of over 50,000 people at Dodger Stadium.

Knowing full-well that Los Angeles are possession giants and Anaheim has struggled with that particular aspect of the game for the last few years, the Ducks did absolutely everything right, continuing the roll they had built up from a 2-1 victory over Los Angeles two nights before at Honda Center.

The Ducks worked to keep the Kings to the outside, they got in shooting and passing lanes, and they got to Jonathan Quick when it counted. It may have looked like a Kings dominated game, but the Ducks, knowing full well that that's how the game was most likely going to go, played it exactly how they needed to.

Jonas Hiller was absolutely sensational in the game, turning aside all 36 Los Angeles shots.

Corey Perry and Matt Beleskey tallied early in the first period to give the Ducks a comfortable cushion, and the team bunkered down and kept the Kings out for the remainder of the game.

Andrew Cogliano sealed the game with an empty netter late in the third.

There was something remarkably beautiful about watching tens of thousands of Kings fans leave their seats early, almost like they were Dodgers fans at heart. But perhaps it was made even more beautiful when the rink was lit up with orange fireworks to celebrate the Ducks victory.

It didn't start great as the Ducks fell behind by a goal less than four minutes into the game, but they responded convincingly, netting four of their own before the end of the first period, en route to a triumphant victory in the house of the team that defeated them in last year's playoffs.

With the Red Wings now banished to the East (good riddance), the Ducks chances for revenge were limited, and they made the most of this one.

Perhaps the biggest salt in the wound was Sami Vatanen's marker with one second remaining in the first period.

The Wings epic flop of a period was even chronicled by HBO's cameras, as their crew was in the building shooting their 24/7 Road to the Winter Classic series.

Or well, it would have been. But instead this game is known for Mike Babcock throwing the camera crew out of the locker room in a fit of hulk-like rage. While this was certainly portrayed as a "tough time" for the Wings on the show, Ducks fans reveled in it, dancing a happy jig at the memory of causing the goddamn Red Wings such pain and misery.

Talk about a nail-biter all the way to the finish.

Eight days after the Tampa Bay Lightning embarrassed the Ducks 5-1 in Florida, the Bolts came to Honda Center for what proved to be one of the most intense and entertaining zero-zero contests I have ever seen.

Jonas Hiller turned aside all 31 shots he faced, many of which came on the power play as the Ducks surrendered six power plays on the night, killing off each of them.

Meanwhile, Ben Bishop on the other end turned aside all 40 shots he faced through regulation and the first one he faced in overtime.

The second one, however, came from captain Ryan Getzlaf with six seconds remaining before the game would move to a shootout. This one, Bishop failed to keep out of his net.

It was a low-scoring game that had Honda Center rocking the entire time due mostly to the fact that the game was remarkably even possession-wise throughout, with the Ducks having a slight edge.

Likewise, the Ducks defensive effort was on-point, as the team in front of Jonas Hiller blocked 10 shots to help their goalie out.

So this is why movie studios always release their award winners right at the end of the year... they're always fresh in your memory.

This one should certainly be fresh in everyone's memory as it happened... last night.

Coming into the game with a three point lead over their opponents, the Anaheim Ducks welcomed the San Jose Sharks in what was essentially (and more or less accurately) billed a game to decide the Pacific Division.

The controversy started early when it was announced that struggling Jonas Hiller would be riding the pine in favor of rookie John Gibson, who would be playing just his second career NHL game.

And the Ducks played almost perfect.

Barring one egrigious mistake from Francois Beauchemin, the Ducks were lights-out defensively in front of Gibson, who was also good, and the Ducks got timely scoring from depth and superstar alike en route to a 5-2 win to seal their second consecutive Pacific Division championship.

While the score may have seemed close when you consider the fifth goal was an empty netter, the advanced stats actually tell things a little differently: the Ducks dominated this game, logging a whopping 59.1% 5v5 close Corsi rating. San Jose, a team that is rarely out-possessed, was schooled by an Anaheim team that forechecked hard, transitioned smoothly, and sacrificed the body to aid its young goaltender, who turned aside 36 of 38 shots.

The Callies - AC's End of Season Awards As Voted by You, the Readers