This is Anaheim Calling to the hockey world... throwing our support behind the movement for Ducks fans to give Teemu a standing ovation for each of his third period shifts in his final regular season game on Sunday.

Share All sharing options for: Honoring The Flash (AH-ah)

One thing that all Ducks fans (as well as almost all human beings) have in common is that we LOVE some Teemu Selanne.  While this hasn't exactly been the greatest year for him individually, in fact it is by almost all measures among his worst, he is undoubtedly THE greatest player in the history of the Anaheim franchise.

We don't know when his legendary career will officially end (hopefully some time in late June, magumbo) but we do know that he will play his final regular season game at Honda Center on Sunday.  With that in mind, some enterprising fans (if anyone knows who to credit, let me know in the comments) came up with the following tribute to him for that game: 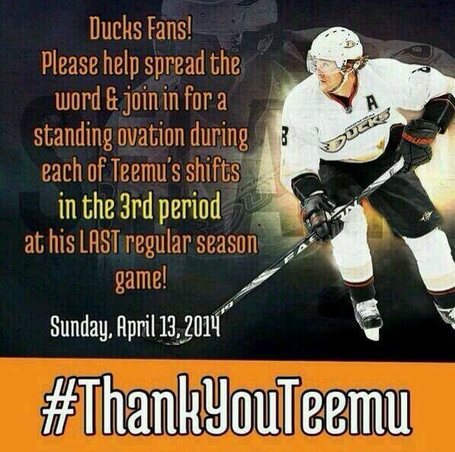 I love this idea for many reasons:

2) Purely fan generated atmosphere at a sporting event is the best kind of atmosphere (see European Soccer songs).  The creativity and the passion that it shows is just so much better than being told to "GET LOUD" by a cartoon noise-o-meter.

I mentioned on one of our podcasts how Slavishly devoted to the organist and scoreboard the Sharks fans in San Jose are, don't you want to prove how much better Ducks fans are than Sharkies?

Also, remember the "Alfie Countdown" from a couple of years back?  Teemu Deserves better than this guy right?

And how about Teemu's first game back in Winnipeg, where they cheered every time he touched the puck and booed every other Duck just for extra emphasis?  In comparison to that, this seems like the least we could do.

4) There may be too much riding on this game against Colorado (first overall in the West?) for it to be the love fest I predicted and hoped for when I realized it could also be the final regular season game (or final game period) for Jean-Sebastien Giguere, but this is about as close as we can get.

6) I really believe it can be done.  I've been massively impressed by the Ducks fans at Honda Center this season on numerous occasions, whether it was the sheer joy and love emanating from the building on Throwback night, shouting down the invading Boston fans, sections of "Ooh, Ah Silfverberg" or sticking with the team through two disgustingly bad periods before the epic comeback against the Jets.  (Note: This is not something I would have said in any of the previous 19 seasons the franchise has been in existence.)

8) I could go on forever, but just to round it out on number eight, here's the big one:

Anyway, I'll be there, wearing my 2007 Selanne jersey, standing up and screaming my head off for my favorite player of all time.  Hopefully, those of you at the game will join me.