Out-possessed the Sharks and had a good first period against the Kings?! Plus what the possession numbers mean for the first round matchup with Dallas. 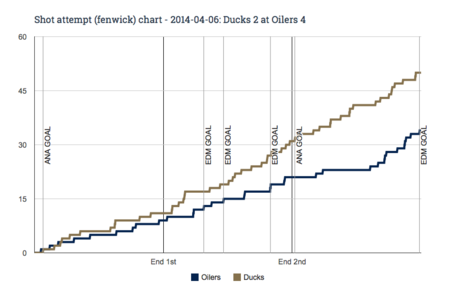 The short end of this game: probably the game that saw Jonas Hiller lose the net as a Ducks player. 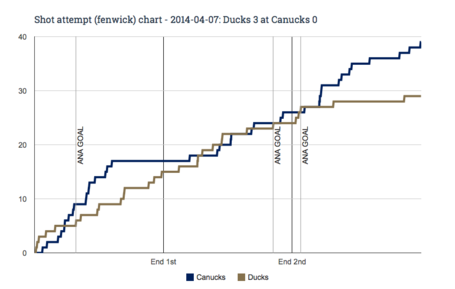 The Canucks tried to put the puck on Gibson over 60 times, with him only making saves on 18 tries. That is a LOT of blocks; thankfully, these charts are attempts minus blocks, so this looks respectable 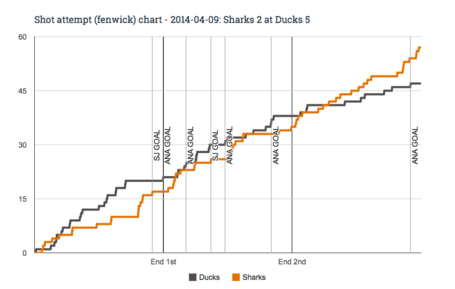 I did not see this coming. 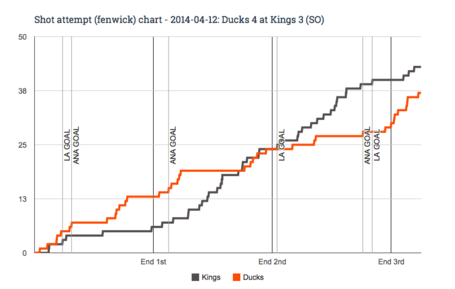 Dammit, we're gonna win the division and face the Stars huh? Yup. Oh and this might have been my favorite first period performance of the year. The Ducks were lights out right from the get-go. There's been some sensationally dominant seconds and thirds from this group on the year, but rarely have they opened up full throttle with so much effectiveness. 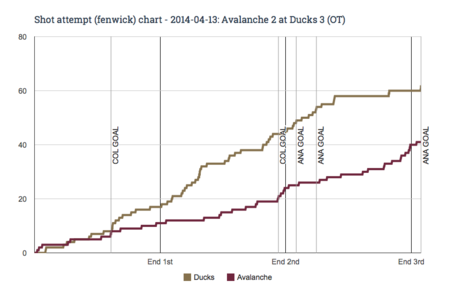 Rickard Rakell is the Future. Boudreau gave Nick Bonino, Mathieu Perreault, and Rakell a lot of play without Ryan Getzlaf, maybe to see what he has, maybe with an eye toward the future. You've read it here first: Ricky Time is soon to be here in Anaheim. Soon.

I'm in Mexico right now. Well, in San Felipe, Baja, really. It's pretty neat to track a sport played on ice out in the desert hahaha more beer!

I was secretly hoping the Ducks would finish second overall in the West. I was salivating at a chance to play the Wild in a seven-game series. Instead, we have a Stars team that, frankly, scares me.

But this is the playoffs. You have to beat good teams to keep playing. At the end of the day I can bemoan matchups and this or that, but if this hockey team plays the way it CAN play (but rarely has over long stretches, aside from the beginning of the year), the Ducks can win. This is true no matter who the opponent is.

Oh and a quick word on luck: high event hockey tends to bring out the luck from the numbers more than low event hockey. This seems contrary to some logic, which would suggest doing more would even out percentages. In some regards, that's true. But in terms how this plays out with respect to fancystats: more events occurring in a game means more weird luck-based "bounces" (if you will) can also (and does) occur.

So you're reading all this stuff about how Dallas is going to upset Anaheim. I suspect they can do so, of course. They do have better possession numbers. But keep this in mind before you get angry or defensive about people picking the Stars over the Ducks: the Stars are high event hockey. They are so fun to watch, I'll be honest. But if any series against a superior possession team was going to draw out the pure luck of the Ducks, it's probably this one. So chin up!

I'll be back after game one with my special postseason series "Kid Ish's Playoffmetrics."