Share All sharing options for: Kid Ish's Playoffmetrics, Game One

I am happy that, as of right now, Ryan Getzlaf is ok after taking a puck to the kisser late-game. I want to see Rickard Rakell in this series (and soon), but I hope it is behind Getzlaf and the surprising Nick Bonino.

There's a ton of game analysis here and elsewhere for you guys to consume on game one, so I'm going to focus more on how I thought the game played out from a numbers perspective. First, this is a very nice writeup focusing on many stats from Defending Big D, and I highly recommend it if you have time.

During the regular season, the standard by which we judge a team's ability to drive play is by "Fenwick For" in "close situations." Corsi is basically shot attempts as possession time on attack, and Fenwick is the same but removing blocked shots as attempts. Blocking shots can be worked into a defensive system, ergo some figure it to be the best "team possession" metric, especially over time.

In the postseason, looking at any stat in "close situations" is more or less arbitrary. It is an elimination tournament. Every shift, every period, every game is inherently more meaningful than the slog of the regular season. In that way, no matter what the score is, teams are playing to win at all times. Trailing by two or more makes no difference: trailing is trailing in the playoffs, so you play to get one back. Conversely, leading by two or more is leading, and protecting that is vital.

So it is that we can view the open of the game, with the Stars killing the Ducks in terms of possession early on, and express our desire to see them start with the same ferociousness as they finished. At the same time, the Ducks dominated the Stars in the two remaining periods while retaining a lead, which is very, very exciting for people like me.

I'll put this back into my pizza metaphor to assist me. The Ducks and Stars sat down to eat an extra large pizza. The Stars ate fast and at such a pace as to suggest they would finish with 60% of it in their bellies. But pizza is too delicious! So while they slowed down to make room for more pie, the Ducks plucked off the prime toppings on their way to finishing with slightly more than 50% of the pizza in their stomachs when the meal was done.

The Stars are pretty sad about this overall, because again pizza is the absolute best, but they feel that if they can maintain the frenetic pace at which they ate to start the meal, they can eat way more pizza than the Ducks in the long run. Perhaps this is true. But as I mentioned in my last "Pizzametrics" posting, the Stars are such fast eaters that they allow for teams to pluck many tasty toppings off the top while they stuff their faces with more more more.

This is my favorite posting ever. 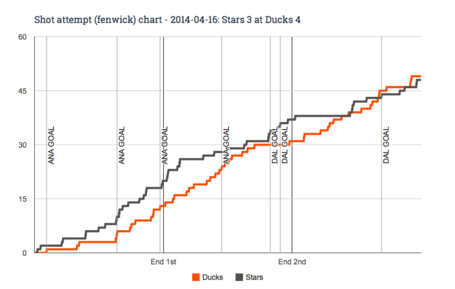 In all states (at evens and up/down players), here are the unblocked attempts that went through. It was an ugly first period. But the two remaining periods were super awesome, especially and including the stretch after the third goal up until the power play that led to Dallas getting back on track. 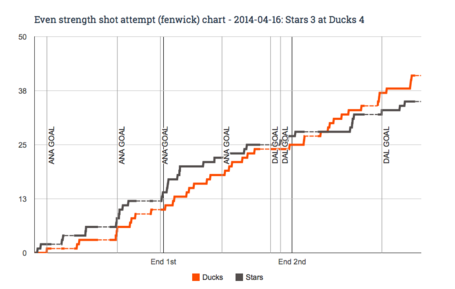 This chart is the unblocked attempts that went through at even strength and shows that, regardless of what the score of the game was, the Ducks stayed with their gameplan and kept consistent pressure against the Stars. In the playoffs, controlling (with consistency) the entire game is far more important than playing toward the score. This is a common failing young teams get into because they are probably only familiar with the regular season, when playing to the score is more or less what happens to all teams.

All in all, I am 1) hungry right now, and 2) pretty pleased with the Ducks overall efforts through one game. That the game ended with the Ducks controlling 51-ish percent of five-on-five possession while leading throughout encourages me greatly. They controlled the whole game, regardless of the first six or seven minutes.

If Boudreau sticks with the home matchup of Getzlaf-Perry against Seguin-Benn, I want to see more dominance by our guys. Seguin's depth play with the Bruins aside, Getzlaf and Perry have a bit more playoff experience and have wanted to lead this team further into the postseason as leaders for a while now. They can do so by upping their play in game two, perhaps inviting Ruff to use his home matches to free his top line from ours (but thus allowing Getzlaf and Perry to destroy them).

That being said, with merely average (scoring aside) possession efforts from the top Ducks, the Patrick Maroon - Mathieu Perreault - Teemu Selanne line ran a-goddamn-mok against the Stars. That was awesome. Also impressive to me was Andrew Cogliano throughout the entire game and Bonino in stretches. Daniel Winnik and Saku Koivu had moments of beauty as well.

And I don't know if I've commented on it enough in the past three weeks except to anyone but my wife, but Kyle Palmieri has upped his play massively. There were several games down the stretch when I said to her, "this guy wants to play in the postseason." Palmieri's finish on Bonino's sweet saucer that opened up the Dallas netminder was all skill, but he worked hard all night (and in the weeks prior) to put himself in positions to do something just like that. I was proud of his game.

There is literally no good pizza in Baja, by the way, so yeah.