Less than a week removed from a heartbreaker overtime loss, the Anaheim Ducks will get their chance at revenge on home ice as they welcome the lowly Edmonton Oilers to Southern California.

Keys to the Game: Last time out the Edmonton Oilers got lucky. Despite Nick Bonino scoring just 35 seconds into the game, Ben Scrivens rebounded and stopped 48 the total 51 shots he faced and the Oilers came out on top in overtime by a score of 4-3.

Aside from the scoreboard, there was legitimately no other way the Ducks lost that game.

The Ducks flat out dominated the game. 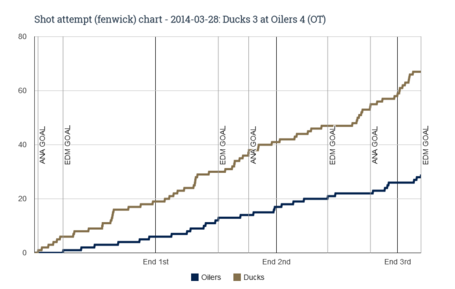 Nine times out of ten when a team plays a game like this, they win the hockey game. Last time out, that was the one. And it wasn't all that bad either since the Ducks still did get a point out of the affair.

The key to the game: play exactly the same way you did last time. Dominate the game, and the goals will come.

What Can We Learn From this Game: Rumor has it that Viktor Fasth will be making the start as Ben Scrivens played last night in a 5-4 losing effort in San Jose. This will be a homecoming for Fasth as he quickly became a popular Duck after starting his NHL career with eight straight wins in a Duck uniform.

That being said, we've since learned he's injury-prone on a nearly Rick DiPietro level and Frederik Andersen is actually just as good, if not better. So Fasth is now an Oiler an will make his first return to Honda Center as an opponent.

Meaning it's yet another edition of the Anaheim Ducks goalie curse. Will Fasth, like so many other goalies before him, come back to bite the Ducks in the butt (like Dan Ellis has done so many times before) or will the familiarity that the Anaheim offense has with him prove to be an advantage?

Fearless Prediction: Rather than boo Justin Schultz for his clearly lopsided and boneheaded decision to abandon the Ducks, the Anaheim faithful instead burst out into fits of laughter everytime he touches the puck, rubbing still more salt in the wounds of his choice.