Norfolk Playoff Preview: We Could Really Win This One!

The Admirals return to the playoffs as an Anaheim affiliate to take on Los Angeles affiliate, Manchester Monarchs.

Share All sharing options for: Norfolk Playoff Preview: We Could Really Win This One! 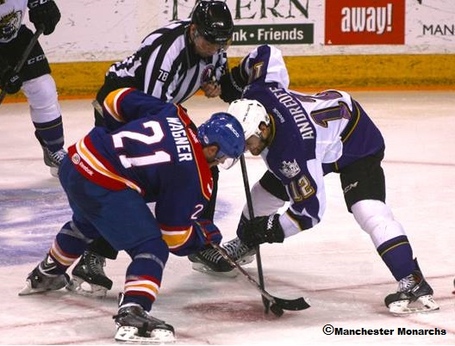 While the NHL is experimenting with their new divisional playoff format and the introduction of wild cards spots, the American Hockey League (AHL) has kept the format of two conferences, three divisions within each conference, top eight teams from each conference makes it to the after party, with each divisional winner getting an automatic top three seed. You know, how the NHL used to do it and how to do it so playoff contention makes sense...

After a dreadful March (4-7-1) filled with divisional matchups, Norfolk managed to go 6-2-1 in April to claim eighth place in the Eastern Conference. While having a great April record, there was no lack of drama. The Washington Capitals AHL team, the Hershey Bears, were also fighting life and limb to get in. For most of the month of April Norfolk & Hershey were tied for eighth, with Hershey having more ROWs and thus the tie breaker. Norfolk & Hershey played two of their last three games each other in Norfolk. It came down to these two games, "Win and In" was the motto. Norfolk won both games clinching their invitation to the party. After losing the last game of the season, the Admirals opponent was determined to be the top seeded Manchester Monarchs, LA Kings affiliate.

Also, another oddity to AHL Playoffs compared to NHL playoffs is the series formatting. Due to travel costs, the AHL is not just able to have teams fly back 'n' forth, back 'n' forth. To help, the first round is a best of five series. If teams are more than 500 miles apart, the series is a 2-3 format, less than 500 miles is a 2-2-1 series and the higher seeded team gets to pick if they want the first two games or last three (with the last two being if necessary). The league also has to take into consideration arena availability too. If a higher seeded team decided to go first, but the lower ranked team couldn't host the last three due to the arena not being available, than the lower seed would get the first two games. It's wonky, but it is what has to be done.

In our case, Manchester is hosting the first two games at home. Norfolk will host the last one to three, as needed. The Admirals are .529 at home and on the road. Manchester has a .776 home record & .605 away record.

Manchester is #5 in the league for offense, with Center Jordan Weal leading the team with 70 points.

Norfolk is #22 in the league for offense, with current recall Emerson Etem & trade deadline acquisition Andre Petersson leading the team with 54 points each.

I assure you I am not insane thinking Norfolk has the advantage... while Manchester has better ranked offense, Norfolk has recently been given the gift of youth. Recently assigned Nic Kerdiles has four points in six games, William Karlsson has nine points in nine games, Matt Bailey, three points in 11 games... the list goes on. Along with the likes of Chris Wagner, David Steckel, Max Friberg, AND if Etem is returned to the Admirals before Friday, Norfolk's fire power will outweigh Manchester's in any battle.

Manchester is #3 in Goals against. Defenseman Andrew Bodnarchuk leads the team with a gaudy plus-43 with fellow Defenseman Vincent LoVerde having a plus-37. Only one player on their active roster as a minus. Plus/Minus isn't the best stat to go by for defense, but let's be real, when you only have one player with a minus, you can say their defense is legit.

Norfolk meanwhile is biting at Manchester's heals and comes in at #4 for goals against. Captain/Defenseman Garnet Exelby is tied with Etem at plus-14. Norfolk's goal differential is only plus-9 so most of the team is minus. Trent Yawney's coaching style is a defensive minded system, which is why the Admirals are #4 in GA, but #22 in GF.

Manchester has the ninth best goalie in the league, Rookie Jean-Francois Berube. Coming in with a 2.37 GAA & .913 SV% in 48 games. In those 48 games, he went 28-17-2. He is the clear starter for Manchester. Fun Fact, when Quick was injured in LA and Martin Jones was on recall, Berube started 24 consecutive games for the Monarchs.

Norfolk also has a highly touted rookie goaltender, John Gibson. Gibson is ranked #7 overall in the league with a GAA of 2.34 & SV% of 0.919. In 45 appearances with Norfolk, Gibson has gone 21-17-4. Gibson had a rocky month in March. He went 3W/6L in nine games before being recalled to Anaheim.

Gibson would be obvious choice for starting but while on recall to Anaheim backup veteran goalie Brad Thiessen made a case for himself to get some action in the playoffs. Thiessen has made 18 appearances total for the Admirals, seven of them in April in which he got the Admirals points in six to help catapult them into the playoffs. The fan in me says go with the Hot hand of Thiessen, but Gibson will probably get the starts. Who knows, maybe his success in the NHL (three Wins in three games and a shutout) will boost his confidence and he will be the Gibson we all know he can be.

Gibson & Thiessen are a great duo, but Berube has been very reliable and consistent in net for the Monarchs

Norfolk ranks #22 in Power Play & has the #1 Penalty Kill in the league.

This is going to be the most stressful series that Norfolk will have to face. Best of five format is hard to come back from if you go down two games. If Norfolk can split the games in Manchester, Coach Yawney will be able to get the matchups he wants at home and shut down Manchester so Norfolk can get the next two wins.

I'll leave you with this fun fact: the last time the Admirals played the Monarchs in the playoffs was a first round/best of five series in 2012. Admirals went on to win it all that year- just sayin!