Ducks not only suffered a shut out loss in Dallas, but more importantly, suffered the loss of D-man Stephane Robidas.

First Period Recap: From the outset, this game was going to be a physical one. The Dallas Stars were clearly determined to draw the ire of the Twins, matching Antoine Roussel and Ryan Garbutt against the first line. Bruce Boudreau placed Devante Smith-Pelly (aka Little Human Bowling Ball) alongside the Twins once again, hoping to add a physical presence to the productivity of the first line. But in the first shift, it was DSP who skated slowly back to the bench after some contact against Roussel's knee. That being said, the Ducks did not hesitate to respond with equally brutal physicality and more aggressive forecheck in the opening period. The Ducks began the period with quick dump-ins and quick shifts on Dallas ice.

The first great opportunity came off of Saku Koivu's stick. What seemed like an eternity in the playoffs, Koivu stared down Stars goaltender Kari Lehtonen, who was cheating out of his crease. Koivu took full advantage of the space behind Lehtonen but missed on the backhand.

The momentum belonged to the Ducks for the majority of the time, as the Ducks prevented the Stars from establishing play on the power play given after Bryan Allen's high sticking minor. After killing the penalty, Corey Perry and DSP made sure to give Jamie Benn some extra love. The Ducks' forecheck gave the Ducks a couple opportunities in front of Lehtonen. Kyle Palmieri stick-handled his way through the Stars defense but was rejected by Lehtonen. After Cam Fowler kept possession within the offensive zone, Pat Maroon could not get his stick on the ensuing rebound. Similarly, Corey Perry failed to cash in on the rebound off Ryan Getzlaf's walk in.

Palmieri failed to capitalize on the rebound off of Pat Maroon's wrap-around attempt due to Benn's hook. Unfortunately, despite having the man advantage, the Ducks' power play once again looked listless. Despite the great puck movement along the perimeter, that was mostly what it consisted of. Hampus Lindholm squandered too much time before he finally passed to a yelling Teemu Selanne. Jakob Silfverberg probably had the best chance off a fat rebound, but ultimately failed to lift the puck over Lehtonen. The hockey gods gave him another golden opportunity off a Dallas giveaway, but no dice.

After the Ducks failed on the PP, with less than a minute left in the period, it only took Benn 10 seconds out of the penalty box to cash in on a rebound off Shawn Horcoff and Trevor Daley's rush attempt. 0-1 Stars.

Daniel Winnik's last attempted to jam one past Lehtonen, only hitting the post...thereby ending the period oh-so-poetically. Despite the strong, solid play, the Ducks found themselves still short a goal.

The first minute of the second period opened with Stephane Robidas writhing on the ice after his knee received contact from Ryan GarBUTT's head. Unable to put any weight on his leg, Teemu and the trainer helped him off the ice. Dallas fans also stood to watch and add cheers of support for their beloved former-Star, "Roby."  After that, things only got worse for the Ducks.

After losing the Ducks lost the blue liner, the Stars soon found themselves down a man after Alex Goligosky headed to the penalty box after high sticking Koivu in retaliation. The best PP opportunity came on a change. Ducks goaltender Freddie Andersen's stretch pass to Getzlaf connected with Koivu right on the doorsteps of Lehtonen. But instead of hitting the back of the net, the puck hit Lehtonen's mask.

Despite the Ducks' aggressive push, they failed to deposit the puck past Lehtonen. Jakob Silfverberg's cross crease pass barely missed Andrew Cogliano. Pat Maroon found Nick Bonino for a point blank shot in front of the Stars netminder, but Lehtonen easily absorbed the puck into the chest.

Both teams had additional PP opportunities during the period. Ben Lovejoy took the hooking penalty when Tyler Seguin came off a rush after a Ducks giveaway. The Stars nearly took a two point lead when Benn jammed the puck into the post. Thanks to the workhorse effort of Daniel Winnik (who deserves some recognition for his effort tonight), the Ducks killed the PP before incurring any more damage. The Ducks had their chance with the PP after Chris Mueller sat for interference against Koivu. Getzlaf's shot from the point created an opportunity for Perry and Maroon, but neither were able to capitalize. Selanne also found an open shot from up top, but the puck was stopped by Lehtonen's mask.

The Ducks dominated the second period, but failed to finish. On the other hand, the Stars connected where the Ducks did not. Forcing back the Ducks defensemen with Seguin's speed, Valeri Nichushkin took the perfect wrist shot through Andersen's five hole. And just like that, the Ducks found themselves in a 2-goal deficit.

The dying minutes of the period amounted in frustration as the Stars' antics continued to ruffle the Ducks' feathers. Perry's wrap around attempt resulted in a scramble for the rebound in front of Lehtonen. Seconds after, resident Stars-agitator drew Ducks captain Getzlaf to throw some punches. Held back by a ref, Roussel managed to get a few more jabs at Getzlaf's cage and jaw. Both headed to the penalty box, with Roussel taking an additional 2 minute roughing minor. Not too long after, Perry joined his twin for holding, while Daley joined Roussel for slashing.

Third Period Recap: The penalties ended without much action for either team. Once again, the Ducks got the better scoring opportunities, only to end up disappointed and frustrated. Mathieu Perrault, Teemu Selanne, and Andrew Cogliano refused to give up puck possession as they looked to cycle. But ultimately, like every other attempt, the Ducks could not finish.

With all the missed opportunities, something had to give. It began with Rousell finding GarBUTT streaking down the middle lane for a shot. Andersen not only made the first save on GarBUTT, but he also made a great stop on Cody Eakin off the rebound. But like I said, something had to give. Despite Andersen sprawling to make consecutive saves, GarBUTT refused to quit and scored on the ensuing rebound. Thanks to GarBUTT, that third goal ended the Ducks' night.

Kevin Connauton's crosschecking penalty gave the Ducks an inkling of hope for a comeback. Francois Beauchemin had an opportunity with the Stars scrambling around. But who else but GarBUTT to knock the net off the pegs just as Beauchemin aimed top shelf. The Stars also received a man advantage when Allen went off on an interference penalty. Bruce put both Silfverberg and Cogliano on the top of the PK with the hope that the two's speed could find a shorthanded opportunity. And it almost came to fruition if not Cogliano's pass was broken.

With a little more than five minutes left, frustration mounted once again as Perrault received a slashing minor, Vernon Fiddler received a roughing minor, and both DSP and Patrik Nemeth left the ice with game misconducts. Not soon after, Maroon was given a game misconduct against Benn. Bruce Boudreau conceded the game as a loss as he sat both Getzlaf and Perry off the ice before things escalated.

Chalk it up as a loss and show up on Wednesday.

The Good: It's really hard to see a good in the game due to Robidas' injury in combination with the loss.  But if I had to find a "Good" in this game, it would be the fact that the Ducks did much better in possessing the zone and the puck. 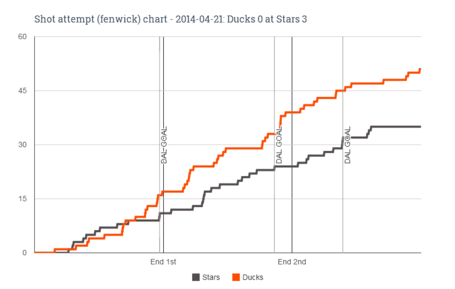 That being said, while this can be seen as "good"--ultimately, the Ducks still came out of the period down by one due to the inability to capitalize on the given opportunities.

The Bad: Take your pick.... The failed power plays. The inability to finish and cash in on those rebounds. Roussel getting a couple jabs at Getzlaf's jaw. Dallas' ultimate success in getting under the skin of both Getzlaf and Perry, as well as the rest of the Ducks. Stars fans chanting Hiller throughout the entire game.

The Ugly: It has been reported that Stephane Robidas suffered a leg fracture. He will not be back to finish the post-season. He has been an absolutely solid since joining the Ducks. This is a huge blow to the Ducks and their defense. Sure, the Ducks have Mark Fistric, Sami Vatanen, and Luca Sbisa all ready to be inserted into the line-up. But none of the three can really replicate the effectiveness of Robidas on the blue line.

It is so unfortunate for a guy who has worked so hard to come back and make a contribution to the team. He came to Anaheim because he wanted a real chance at the cup. The whole thing is very sad.

3rd Icehole: Kari Lehtonen- While he has not been spectacular by any means during the regular season or in the post-season, he came up with some big saves on home ice for Game 3. His first playoff victory is a shut out, posting 37 saves. The Ducks just could not solve him tonight.

2nd Icehole: Jamie Benn- From the moment the Anaheim-Dallas series was set, we all knew that success would depend which team's star players shining brighter. Well tonight, Jamie Benn was the dagger in the Ducks' sides. He sparked the Stars' offense with his speed on the rushes. He opened the Stars' scoring and continued to be a dangerous offensive presence on the forecheck. I would not go as far as admitting him as the best player on the ice, but he made good of the opportunities he saw, whereas the Ducks fell short.

1st Icehole: Ryan GarBUTT- This is an official welcome to the top of Anaheim's Most Hated Current NHLers list. We didn't like him all too much when his hit resulted in a ex-Duck Dustin Penner's concussion. And now we shall peg him as the culprit to Stephane Robidas' right leg refracture and early playoff exit. From puck drop, his and Roussel's jobs were to be the biggest complete pains in the ass--and they both succeeded beyond all expectations. But taking out Robidas wasn't enough...GarBUTT[CRACK/HOLE] wanted to cement his status by scoring the third goal. That third goal was a perfect example of his relentless pain-in-the-ass play throughout the night. He knows what his role is as an agitator and he succeeded tonight. Getzlaf and Perry allowed him and Roussel to get under their skin. Just can't happen again in the next game.