I play the heavy game.

This was another frustrating loss but for different reasons than in game three. After a very well played first period that saw the Ducks up by two goals, a very poor second period combined with two very bad goals to even the teams out. In the third, the Ducks played better overall but were again let down by below average playoff netminding. Having that lead and losing it is hard to swallow.

Here are the shot attempts minus blocks through three periods, courtesy of extraskater.com: 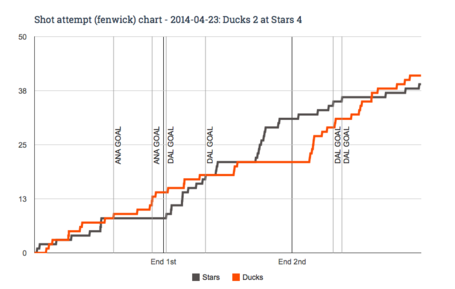 Here are the even strength shot attempts without blocks: 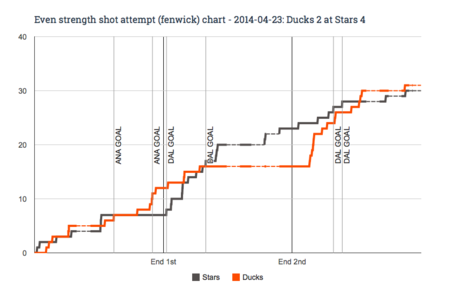 My biggest pet peeve from last night was Boudreau's inability to isolate his better forward players and free them up from the Stars better players. With Cam Fowler doing an excellent job nullifying Tyler Seguin (leaving Jamie Benn more or less to everyone else), the need to keep vital guys who have pressured the Dallas defense (like Andrew Cogliano and Jacob Silfverberg) tied to poorer offensive centers in Saku Koivu and Nick Bonino irks me.

Let's put it simply: the good forwards (in terms of driving play up) for the Ducks last night were Patrick Maroon, Mathieu Perreault, Corey Perry, and to a lesser extent Devante Smith-Pelly, Rickard Rakell, and Emerson Etem. The bad possession forwards were Daniel Winnik, Bonino, Kyle Palmieri, Silfverberg, Koivu, Cogliano. Seguin and Benn combined saw the most of the last six players mentioned.

But in games one and two, Cogliano, Palmieri, and Silfverberg were legitimate threats to that Dallas back end. They weren't given too many opportunities to take chances when shackled with those who are rapidly becoming exposed in this series.

Forwards:
-Perry had the chance to take over the game without Getzlaf in the lineup. His linemates were fine enough to put him in the OZ as much as possible, but Perry did nothing outstanding while there. He didn't hurt the team, but frankly aside from facing Trevor Daley and Alex Goligoski the most, he's been put up against some crap forwards he should be exploiting.

-Perreault was outstanding last night. And the game before that. And the two before that. I think you guys are seeing now why I was so exceptionally high on him all season despite his inconsistent production. This is one of the functions of advanced stats, to illuminate who is driving play even if scoring is removed (since it is a very rare event, all told). He has been an excellent fetch for the team and should be given heaps of money, praise, and women.

-Maroon was equally outstanding in game four. And in game three. And in the two before that. In fact, aside from the acts of actual scoring that Getzlaf and Perry contribute (because they are in fact elite and skilled scorers), I would say Maroon has outperformed Perry and Perreault has outperformed Getzlaf in terms of consistent play through four games. Boudreau should leave them as a tandem and put someone with them to help score (like Silfverberg). Perry should have been that winger in game four.

-Smith-Pelly was great in game four, the same as he was in game three. He forechecked well, created chances, and battled hard for 50-50 pucks in very limited minutes. He should see more ice in game five.

-Please more Rakell, Boudreau? Please? Stop sheltering him. Every time he's on the ice, play begins moving toward the OZ against any opponent. "Defense" doesn't matter when the puck is away from the net. While his friendlier zone starts might suggest he's been given an easier time keeping play in the OZ, more experienced players with similar zone starts on this team get caved in. Enough already. He was stellar in a limited capacity in game four. He would have played more, but the second period had fewer neutral and offensive zone starts, so his line didn't get the tap. But they should have.

-Etem was a feisty player in game four. I had hoped he could impact the game more, but his minutes and role were kept to a minimum. However, he cycled extraordinarily well with Smith-Pelly and Rakell, as anyone who has followed the AHL affiliate expected.

-Silfverberg is getting some garbage assignments in this series, and game four was no different. Did you know that in Ottawa, he was among the team leaders in shots on goal? Silfverberg is a great two way player who needs a volume of shots to get production, but Boudreau has OPPRESSED him with checking roles thus far. Again, I think there was some injury concerns earlier on in regards to that shot, and I suspect Boudreau has grown to trust his defense so much that he's hesitant to switch things up. But Silf's release is one of the quickest on the team, and since the Ducks have two damn goals in two games now, SCORING IS NEEDED. Open up the Silfver, Brucey! He needs shot attempts to be free!

-Koivu was unimpressive last night, as he was in game three. He was pretty decent in game one and through most of game two until the last period. But last night he was just there.

-Cogliano was effectively neutralized in game four. His speed was giving the Stars fits in games one and two, and he was using it through the NZ and in the OZ to great success on the team's zone time. In games three and four he's been more or less kept in check, in part because Dallas can match against him but also because frankly, Boudreau loves him as Koivu's or Bonino's checking buddy way too much. Cogliano is another forward who, if put with say Rakell and a forechecker, would be all up in Dallas' grills.

-Winnik was great early in the series, including some big time work in game three. But he wasn't an issue in game four. I'd written about him earlier in the year: he's not a driver of possession. He's a very effective linemate on good possession lines, however. Pairing him with the black hole of Koivu or the spotty Bonino is basically killing any positive to his game except board work in the DZ, which is still where the puck shouldn't be.

-Bonino needed game four as a coming out party. We know what he's capable of, we've seen it in spurts all season. But without Getzlaf, with Perreault seeing first line minutes, and with Koivu more or less the third line to Bones' secondary role, he had a chance to face the Stars depth players and win. He didn't win. I suspect he's similar to Winnik in that he doesn't necessarily drive possession well, but he doesn't kill it either. But I can confirm, from this entire goddamn year of it failing hard, to get the best from him, he needs to be kept away from Palmieri.

-Palmieri played in this game, I think. Did he? Look, he was amazing in games one through three. He was physical, he was driving play hard, he was backing off defenders well. Just like other guys, without Getzlaf in the lineup to stabilize the lines, we needed someone (anyone) to step up and be heroic. Palmieri has that flair to his game wherein you think he's capable of it. But we're tied at two in the series after four games, and Palms still has only one point (off his first shot). And frankly, if the Ducks are supposed to be deeper than the Stars, this is a player who should be showing it (but isn't). Palmieri shouldn't be with poor possession players, but half the lineup is centered by garbage puck movers so unless he shows some part of his game to suggest to Boudreau that he deserves time with a Getzlaf, Perreault, or Rakell, I don't honestly know how to unlock the beast Palmieri out of the invisible Palmieri.

Defensemen:
-Fowler was once again the best defender on the team in game four. It's happened a bit throughout the season and in this series, but last night it happened several times: Fowler defends two guys while Lovejoy just sort of stays as positionally sound as possible for an outlet once Fowler wins the puck. Cam literally plays two positions on defense. I love him.

-Lovejoy was fine enough in game four. He and Fowler work well enough together that it sort of meshes for now, but it certainly does hurt any upside Fowler could provide in transition since he's basically playing two spots to cover for Lovejoy.

-Lindholm was bad in game four. After his brief stretch of brilliance to end the year, he's once again looked more pedestrian the past few games. He does some things extraordinarily well, don't get me wrong. But he got filled in badly in this one, even in limited minutes (due to possible injury). It wouldn't shock me if he's sitting for Sbisa in game five.

-Beauchemin had a bad game four. He and Lindholm played in their own end way too much, and four unanswered goals, regardless of who is on the ice at the time, happen when the puck is in the DZ too much. With Fowler facing off against the toughs, Beauchemin should be outdoing the Stars depth with whoever his partner is and lost that fight last night.

-Allen was middling last night. He's lumbering, slow, and awkward when moving the puck. [Ed. Note:  Translation:  Bryan Allen was Bryan Allen. -CK] He has a tendency to push play backward instead of forward. (Robidas made him better, because when Allen touched the puck, he knew he just had to find him or his near wall winger and send. Now he's trying to make reads, which results in dump around along the yellow. The Stars pressure too much on the forecheck for this to be effective.) But strangely, he's been an effective defender despite that because of his positional awareness. He probably played too many minutes last night, but that happens when a second pair guy goes down for a bit.

-Fistric was also middling last night. He's never going to be the best, but we certainly hoped for more raw physicality than we saw from him. He was limited in play due to a possible injury as well, but if he is healthy enough to play then I could see him back in game five.

Goaltending:
-Andersen's biggest question mark as a prospect, from the stuff I read, was his conditioning. There were concerns that his size could wear him down more quickly than other players, especially when it came to his lateral movement off rebound efforts. All tenders leave rebounds now, it is the way the position is played. The better guys move back against the bounce to cover that side quicker than the guys who struggle. Andersen struggled BAD in game four, and I'm not above saying his gaffs changed the outlook of the game.

-Hiller saw one shot, officially? He looked pretty good on the bench in game four though. He seemed relaxed. It's important to look real good and relaxed when riding the pine. (The smarter backups are valued highly because they help run that end of the bench. They communicate things they see to their mates, they help with changes, etc. I don't know how Hiller fares in this area, but I suspect he's as good as he can be between "um's" and "uh's.")