Frederik Andersen lost the captain-less Anaheim Ducks the momentum and, indeed, most likely the entire game in game four due to some soft goals. In game five, he is the reason the Ducks, who were massively out-possessed and chanced, came away with a victory. In front of him, some individual efforts and production on the man advantage gave the goaltender some offense to help calm his nerves.

Here are all the shot attempts minus blocks from game five, courtesy of Extraskater: 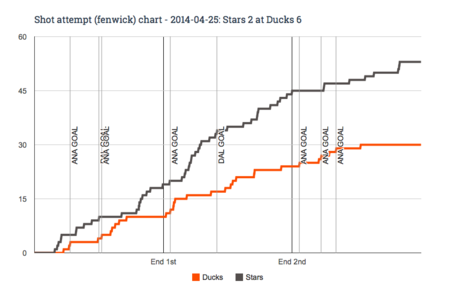 Here are the even strength shot attempts minus blocks: 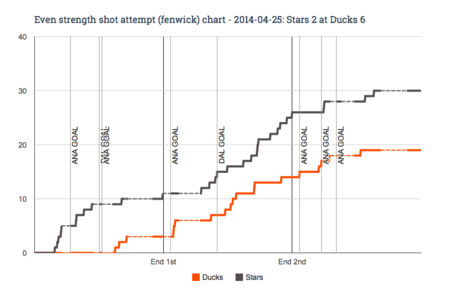 When going into this series, it was the speed game that concerned me. The Dallas Stars have so much speed up front, when the game opens up and they can skate, they tend to put teams on their heels. The physical game has consistently been won by the Ducks in this series, even in the two away games in Dallas. (The antics away from the between-whistles physicality has certainly gone the Stars way, but the Ducks PP killed too much of that in game five.)

Game five had a little bit of both styles again at play. The first period was a hard game along the walls, which the Ducks have controlled in this series. Play was slowed, benefiting the stronger puck handlers like Ryan Getzlaf and Corey Perry, and the supporting teammates were fast to finish checks and initiate contact. This frustrated the Stars like it has each game, goading them into post-whistle antics that had been far too effective in unsettling the Ducks game. Tonight, the refs essentially eliminated that aspect of the game for both teams by calling all sorts of penalties.

Ryan Garbutt's spear of Perry probably doesn't get him a major and a misconduct in Dallas in games three and four. In game five, after two games of these teams trying to hurt each other somewhat blatantly, the refs were over it. Garbutt gets the gate, the game opens up in favor of the Ducks, and they end up the entire sequence up 2-1.

The second period was probably one of the best periods of hockey I've watched in a long while. Remove scoring and rooting interests from it, and the back and forth frantic pace and trading of chances was immensely entertaining. The Stars deadly speed game was very evident here. Their defense isn't very solid in the traditional sense, but they play a system designed to limit their touches of the puck and immediately put it up to a forward. (This is why slowing the game down hurts them, because it limits that speed in transition they boast.)

Take the Ducks out of this series for a second. Pretend the Stars are playing anyone else who isn't your team. Ignore that they have two agitating players who are being put out there to disrupt our guys (and are winning when they do it). They are a very fun team to watch. They push the puck up and attack so fast, it feels like how hockey should be played by more teams. Jamie Benn and Tyler Seguin are really good hockey players.

I envision the Ducks being more like this young Stars team in coming years than not once the older forwards are gone and the extraordinarily talented young guns can finally crack the lineup consistently. Devante Smith-Pelly, Rickard Rakell, and Emerson Etem, not to mention the ones coming behind them, are three players who will come in and play this style of hockey better. Boudreau is like Ruff in that they preach solid defense by quick-ups to forwards for constant attack. This excites me.

The Ducks came out in the third period and immediately settled back into a wall game, limiting the Stars speed. Getzlaf and Perry, along with Nick Bonino, established strong zone time despite not generating many shot attempts. (This is best visualized above by both teams being flat in attempts during those periods.) It was this game that frustrated the Stars once again, forcing the Benn penalty on Getzlaf that sealed the game.

To win a game without the edge in possession, a strict adherence to the aspects that make the team successful is mandatory. There's very little room for mistakes in it, which Anaheim limited tonight. When the Ducks were able to bottle up the Stars time on attack by playing along the walls, they were able to wrest control of the puck away enough to do some damage. They also remained disciplined off the puck and were able to capitalize on the young Stars penalties the way Boudreau wanted in the away games.

I have three players who deserve praise: Andersen rebounded from game four and played solid in game five. Luca Sbisa came into the game after sitting for a long stretch and was immediately impactful; his physicality and effort in staying engaged in puck battles provided steadying defensive minutes when Cam Fowler was sitting. Jakob Silfverberg had one of his outright best games as a Duck and was rewarded with production from his efforts; his two way play is decidedly underrated (probably because he's been shackled to possession black hole Saku Koivu for too long) but his shot, like I mentioned last post, is so quick. I liked watching these three in game five.

My ideal away lineup for game six would be to sit Teemu Selanne once again and insert Kyle Palmieri back into the lineup. Assuming Getzlaf is still clear to play, I would put Palmieri with the newly emergent secondary scoring line threat of Mathieu Perreault and Patrick Maroon, "the 10-minute man." Barring that change, hopefully Boudreau can shelter Selanne enough on the road to limit his DZ liability (which is high at this point).

With Sbisa joining Francois Beauchemin, I think the blue line is fine enough until more tinkering can be considered in any future rounds.

It would be nice to end this series on the road and prevent another elimination game at home, as happened last postseason. Go Ducks.