The Anaheim Devos starring Nick Bonino beat the Dallas Benns starring Trevor Daley in a riveting miracle game full of joy and the power of positivity.

The stats community likes to take samples and make averages and rankings, and it is super fun and rad. But each game is also a living thing, and there are parts of them that looking at what we track currently can show in a pretty, chart form (courtesy of extraskater.com).

So I decided to do a visual post today. Here are shot charts and some notes from the phases in each. 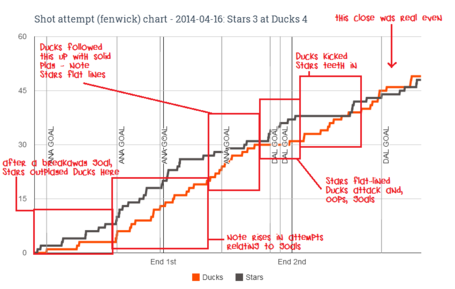 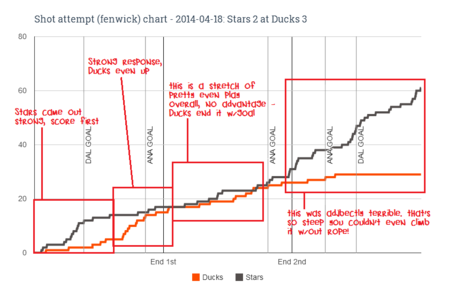 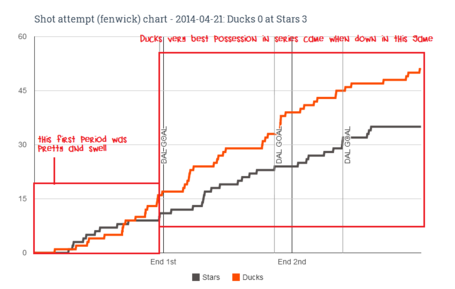 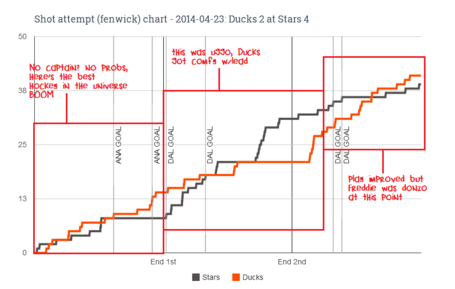 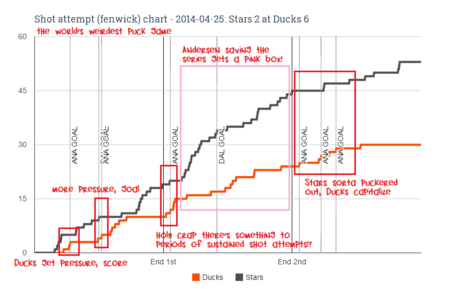 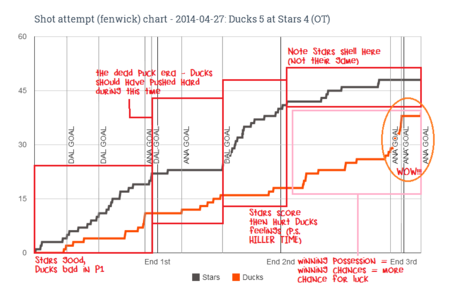 There isn't too much I want to add to game six because it was pretty incredible, but I should say a few things. The Stars kicked the hell out of the Ducks. They were faster, they played cleaner, they controlled the puck and play for 55 minutes. The Ducks were fortunate to be within two with five minutes left, and then Nick Bonino and Devante Smith-Pelly happened. Taking nothing away from the guys who got them the puck in each situation, both guys had to make tremendously skilled plays to score because they had to go high on Kari Lehtonen. They did. It was pretty surreal, which lasted even beyond Bones game-winner in OT.

The way the Ducks won the game/series, through some key depth contributions in game six, really speaks to what they needed against Dallas. Here are the two biggest battles that occurred through six games. The first is Cam Fowler up against the Stars top guys. The second is Alex Goligoski up against the Ducks top guys. The Stars won on both, and without the Ducks other players this series could have been ugly. 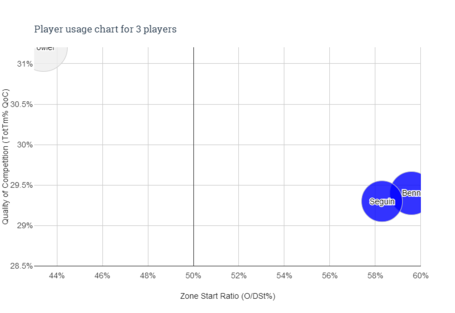 Ruff was able to get Tyler Seguin and Jamie Benn away from Ryan Getzlaf and Corey Perry through most of the series, leaving mop up to Fowler. That Fowler wasn't a red dot up there in the corner tells us he held his own despite allowing Seguin/Benn to dictate play too much. Seguin's lack of any real scoring dominance in the series probably speaks to the matchup best. Still, these two started way too many shifts on the attack. 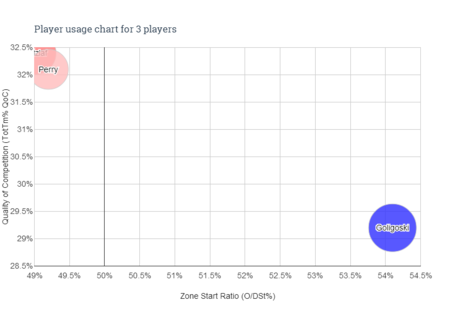 Getzlaf and Perry are both positive players normally. Goligoski played very well against them all series. Without the contributions of other players throughout, the guys like Mathieu Perreault, Patrick Maroon, Jakob Silfverberg, or Bonino at various times, the Ducks would have been in a tough spot.

I am happy a Boudreau-led Ducks team is getting a little deeper into the postseason. I am happy for us, Ducks fans, as well. Not bad for a team who I suspect is still a year or two away (at least) from being a true favorite.