Handshake Line: These Guys Are Ahead of Schedule

The Stars came pretty close to upsetting the top seed in a postseason that they weren't even expected to qualify for.

Share All sharing options for: Handshake Line: These Guys Are Ahead of Schedule

Congratulations to the Dallas Stars. They managed to go from full rebuild mode to a playoff team in one year, and right now they are looking forward to an offseason in which Jim Nill's job will be to add the missing pieces that will turn this group into a Stanley Cup contender.

Jamie Benn may have been the best player in the series from either team, regardless of the outcome. He was dangerous every time he was on the ice, whether his team was on the power play, at even strength, or even down a man. The Stars could not have picked a better leader to take up the mantle of Mike Modano and become the face of this franchise going forward.

Alex Goligoski and Trevor Daley showed up big time in this series, holding down the fort defensively when almost all of their fellow blue liners were making costly errors. The fact that Goligoski finished the series with the best +/- rating (+7) of any player on either team (and Daley was tied for 2nd with +5) while playing against Ryan Getzlaf and Corey Perry says a great deal about the quality of their play. The following player usage chart from extraskater.com just about says it all. 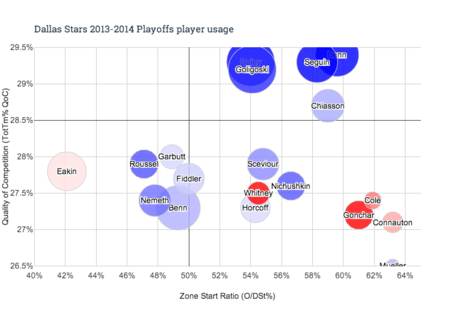 Tyler Seguin may not have been the difference maker the Stars needed him to be if they were going to pull off the upset, but he sure looks like a guy they should trust to be the difference maker in years to come. A few more of those one-timers get on net, and we're looking at a Game Seven at Honda Center.

Jim Nill has done a hell of a job making this team relevant again, beginning with his decision to hire Lindy Ruff, who also deserves a ton of credit for turning the team around.