I've pretty much fully abandoned using pizza pie as a metaphor for possession ever since I broke it down straight up a bit ago. That being said, pizza is still the best. 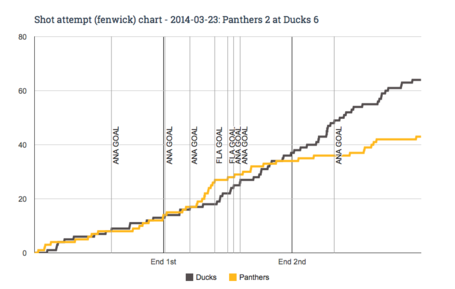 This was, by every measure, a good game. The Ducks controlled the game when it was close and didn't sit back until late. This is the kind of game the team should have against a team outside the playoff picture, at this point. 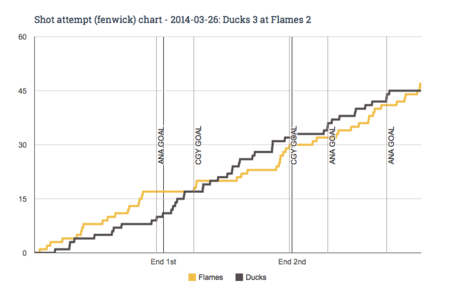 The Flames are what's called a "high event" team. I'd probably consider the Ducks that as well. An event in this sense is a lot of shot attempts for and against, blocked or otherwise. High event teams may drive a lot of play but they yield just as much. This is in contrast to low event teams like the Kings or Devils. They control play by suppressing attempts against--I've written about this before.

The Flames drove most of the play against the Ducks in this game, but it was pretty close. That's fairly typical of high event teams, and we've seen that with our team at times too. Whenever I see a "close" split of 52-48 or anywhere in that range, I'm looking at about two minutes more of total possession (on attack). Anything outside that is a big loss in terms of territory.

This was a close enough game to be more or less even overall but--and this is what bugs me--after the huge game the Flames had against the Ducks, this team should have dominated far more territorially. But credit the Flames, they came out working hard, and eventually the Ducks responded. 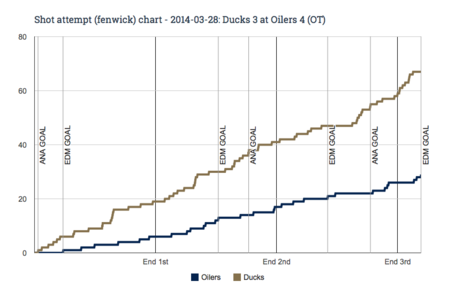 This was a much better team effort from the Ducks. The Scrivens did really well tonight though. I don't want to hang too many words here, because I was pretty outspoken on Twitter that Hiller was fairly crap in this one. At the same time, the Ducks gave up a lot of scoring chances, more than they should have. The Oilers tend to do this to a lot of teams because they have a lot of skill on the top six, and that counterattack is pretty deadly--but the Ducks need to tighten up nonetheless. 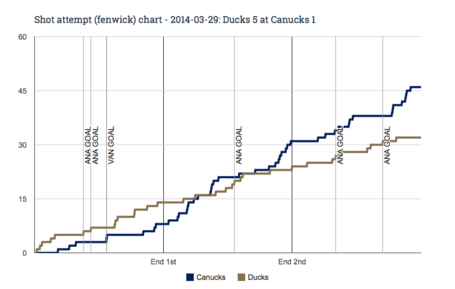 I love this game. When the game mattered, the Ducks had the puck on attack 60% of the time. That's pretty good. Once the second period hit, the Ducks were defending and attacking with enough balance to properly manage the lead and add a cushion goal or three.

If the Ducks are this team in the playoffs, they will be good. The Canucks are a pretty strong possession club, so holding them to a mere 40% attack time is a good thing. Winning possession overall adds two wins in a seven-game series, more or less. That's halfway to total victory, so more of this.

New Look PP:
Mathieu Perreault and Patrick Maroon getting more PP time is very good. Perreault has been put down on the right half-wall, a spot Nick Bonino capably played and now does on the second unit--at least in the brief usage we've witnessed. Maroon has freed up Corey Perry by being the man in front of net.

A Corsi Reminder:
I might need to write on this in more detail. Shot attempts are the mainstay of "advanced" stats in the sense that they correlate to scoring chances and serve as a proxy measure of puck possession. Whether you like it or not or agree with it or not is irrelevant, because everyone can agree that taking shots at the net is good.

Preventing shots from going on net is the necessary other side of that. There's one puck. It is either being shot at you or being shot by you or somewhere in between. If you succeed on winning the "in between" state of play, you will be shooting it more than being shot at.

This is the underlying strength of the Corsi stat. A positive Corsi player may not be a scorer--and recall from my earlier work, scoring is as much a skill as anything else. What he is in absence of scoring on his own then is someone who wins the in-between state of play.

I've been praising guys like Perreault, Maroon, Matt Beleskey, and Jakob Silfverberg all year for this reason alone. They drive play. They don't do it by shooting from everywhere. They do it because they prevent more shots against than other forwards not named Getzlaf or Perry.

Win the transition game, the chance you win the Corsi game is higher. And winning possession means a better likelihood of controlling chances in a game. That's what strong team play can (and should) control.

Introduce Yourself to Stats:
I've been asked how I started tracking stats more seriously. A few years ago I began tracking chances by team and it snowballed from there. In time, what I wanted to know and what the numbers already out there told me pretty much aligned.

Here's how you can start if you want to fool around on your own: start with tracking scoring chances per game by team--don't worry about personnel at the beginning. Oh yeah, and do this at even strength only. You can add various game states down the line, as you see fit. A scoring chance, broadly put is a shot attempt within the area I outlined below. It is more or less the "home plate" looking area, but to start you can easily go with a circle around the net (in orange). 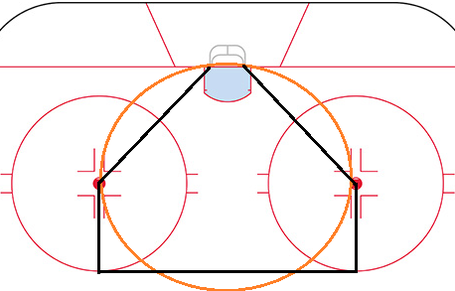 When the Ducks take a shot attempt from "the slot," record it--a plus, a tick mark, a number, a star, a smiley. Whatever the hell you want. When the opposing team shoots from there, mark it too. And don't worry at first, be liberal about it. If the attempt is pretty close and you're unsure, note it anyway. You'll learn your sweet spot with it quick, especially when it comes to point shots through screens or shots from outside areas that end up as chances due to traffic in front.

Now, some people get pretty crazy and try to tie chances together with shots on goal, but that's not really the purpose. Any attempt, whether on net or missing the net or blocked by a defenseman, is still a player free in the slot to make a prime scoring attempt--it says enough that any attempt is made (both offensively and defensively) from there.

At the end of the game, you can add up which team gave up the most chances. Generally, you will see that this follows Corsi/Fenwick data. Shot attempts are a proxy to time on attack as well as a proxy for chance counts.

As you feel more comfortable with this, maybe even after one game, you can track chances by time. Add a timestamp to your chance--"1-0:45, 1-0:59, 1-2:13," etc. This will allow you to see the frequency with which events happen as well as inform you contextually why the team with 50 shot attempts that have 13 chances is still doing better than the team with 20 shot attempts and 10 chances. Those 10 chances are keeping the chance counter close, but if it happens spaced out, there's a lot of game in between the team is losing at. Furthermore, the team with more attempts is still controlling the puck more, which you can more or less see in your own data.

Once you have a nice feel to it, start incorporating home team personnel. Remember how the Ducks are icing their lines and record who takes the chance--if Getzlaf has the chance, Perry is also a plus, as well as their left wing and two defensemen. (You can learn to weight who takes the chance and who creates the chance far later on.) This will allow you to keep a team count for chances but also to see who is wining (and losing) the chance battle against the other team.

Trust me, if you don't want to believe possession metrics, doing this manually will convince you of the strength of certain players. The guys we tend to like for personal reasons become much harder to objectively defend when they routinely get out-chanced on the ice. By tracking it, you usually begin seeing why it happens so much more clearly too.

Anyway, when you get even better at this, you can begin adding personnel from the other team to the mix, and it gets pretty fun. When I track, I track personnel with weighted measures and against whom. I also tend to note the method by which the chance was created as well as how many more shot attempts come from the chance before zone clear. But sometimes I don't. It varies. By doing all this though, you can get a really solid feel for team systems, personnel usage, who drives play, who concedes territory, etc.

And again, you'll begin to see that it very strongly correlates to Corsi/Fenwick data derived from everything the NHL already pulls anyway. I still find it fun to do now and again though, especially at the outset of the season when I'm trying to re-learn hockey personnel. It is a nice way to get introduced to the team and learn how the coach aims to use guys. When new players come up or go, I may track a couple games here and there again.