Handshake Line: Hate to Play 'em Would Love to Have 'em

Share All sharing options for: Handshake Line: Hate to Play 'em Would Love to Have 'em

This was a pretty great series, nasty, but that's how playoffs should be.  Down the stretch Dallas was behind only the Kings on the Potential-First-Round-Opponents-I-Would-Rather-Avoid list and they showed why.

Fans: First up, I have to give the obligatory nod to the Dallas fans.  The building was packed and incredibly loud for all three games and it really made a difference.  The Stars are a young exciting team that clearly feeds off of the atmosphere in the building, and you don't have to look any further than the first two goals of Game 3 to see that.  Each of those goals came off the heels of a strong penalty kill from Dallas that got the crowd fired up and the way that the team worked with the fans and vice versa to swing momentum from defense to offense was outstanding.

Special stick tap to the fans who still rock the only respectable jersey in Stars' history.  White or green, the one with the Star shaped trim is quite possibly one of the best/most unique jerseys ever and it's a travesty that Reebok made them discontinue it.

However, the number one thing that needs to be recognized about the Dallas fans in this series was the heart warming response they gave to Stephane Robidas as he was helped off with yet another broken right leg.  Regardless of whether he continues playing, with the Ducks or anyone else, he'll clearly always be a Dallas Star.  He was a perfect representative for that team and clearly the fan's recognize that.  I generally don't like when people bring up classiness in relation to hockey, but in this case it was pure class from the fans to show Robidas what he meant to the franchise in a dark, dark moment for him.

Trevor Daley: To me, he seems like the new Robidas, just the epitome of what it means to be a Dallas Star.  First and foremost, he's a fantastic player that can and will do anything his coach could possibly ask of him.  His positioning, stick work, skating, passing and shooting are all top notch PLUS he'll go above and beyond physically.  As if he wasn't already beloved by the Dallas fans, giving Corey Perry the ol' ground and pound in the crease will certainly be one of the lasting images from this series.  He's just one of the many players throughout Stars history, and on the current team that is a HUMANGOUS BIG pain in the ass to play against on many levels and as such, is an AMAZING asset to have.  Speaking of which....

Ryan Garbutt and Antoine Roussel: Look no further than these two for the NHL's next generation of Super-Pest.  It's kind of surprising to me, how few of our AC writers have been able to look past their white hot hatred of Garbutt and Roussel to give them the props they deserve in these handshake posts.  I'll get to Jamie Benn in a minute but aside from him, Garbutt and Roussel probably had the biggest impact on this series of any Dallas players.

Their value to the team is almost the exact mirror image of what i said about Daley above, but not in a bad way.  They know that their role is to bury themselves under the skin of the best opposing players in any way possible and they play it to a T.  But that overshadows how good they actually are at playing the hockeys.  Garbutt had three goals in this series and led the Stars in points against the Ducks in the regular season and Roussel had three assists.

There isn't much worse than watching these guys run around, taking nasty little shots at top players, diving all over the place so that you can't really even give it back to them and then throwing it right back in your face on the scoreboard.  They're the quintessential players you hate to play against, but would love on your team, which is really the highest complement you can give to guys like that.  (As long as Garbutt walks the line with the Department of Player Safety)

Jamie Benn: There isn't really much more that needs to be said about the Dallas captain.  He's a truly special player and the Ducks just had no answer for him.  Even thought he plays the wing he's the Stars' version of Ryan Getzlaf, in that he can do anything and everything in all situations.  Tyler Seguin is great too, and he certainly opened up a lot of space for Benn to take advantage of, but he'll never be the complete player that Jamie Benn is.

Also with the long hair, he looks like a more charming/less creepy version of Jack White, which isn't actually a good thing but I happen to be a pretty big White Stripes fan so I guess I'll give him a nod for that too. 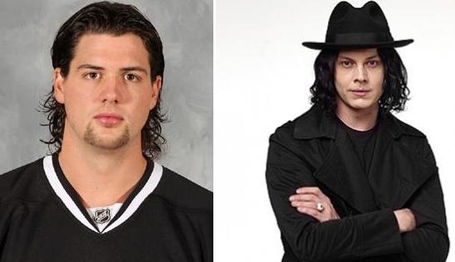 Daryl Reaugh: Granted, being a California based fan, I didn't get to hear any of his aces color commentary on this series, but that doesn't matter.  Razor is the best in the business (and his partner Ralph Strangis is no slouch either).  Hopefully NBC picks him up for some duty the rest of the way, although with fewer and fewer games that seems unlikely.  Anyway, thumbs up to the human thesaurus.