First Period Recap: The Oilers won the initial face-off and controlled the opening moments of the play. But the Ducks must have finally grown tired of trailing in the opening periods because with the first shot, the Ducks took the lead. Jakob Silfverberg forced Oscar Klefbom in a turnover before going down at the blue line. But Andrew Cogliano gloved it down and Rickard Rakell beat Justin Schultz (BOO) to the puck across the blue line. Receiving the pass, Cogliano found Silfverberg, right in front of ex-Duck netminder Viktor Fasth. Fasth initially made the save but a lucky bounce off Sam Gagner gave the Ducks the first lead. 1-0.

The Ducks’ forecheck exploited the weak Oilers defense by forcing turnovers and finding open ice. Early on, Cogliano and his line looked the most dangerous. If not for Fasth's diving play, Cogliano would have had a goal from a tight angle. The fourth line of Devante Smith-Pelly-Nick Bonino-Daniel Winnik did their toll and possessed the puck for an extended amount of time. DSP also had a point-blank opportunity after Bonino won the puck from behind the net.

After the crappy showing against Nashville, Jonas Hiller had regrouped and started this game sharply. (SPOILER ALERT: But alas, that would only last 20 minutes....) Hiller made some big stops after the Oilers' long stretch passes evaded the Ducks' defense, first on Ryan Nugent-Hopkins, and then on Ryan Smyth.

A delayed holding penalty on Gagner allowed the Ducks to have a 6-on-5 advantage for more than a minute. On the opening shift of the man advantage, Corey Perry very nearly took the puck right into the goal. Unfortunately, his lone shot went wide. Nothing after that was worth mentioning.

The period would end with the Oilers receiving the man-advantage after Stephane Robidas was called for the hold on Anton Lander. The Oilers kept majority of the puck possession and RNH had one shot that Hiller fought off with his shoulder.

Second Period Recap: The Ducks kept the Oilers on the periphery and killed the 30 seconds remaining of the power play. Perry's wrap-around the net resulted in a loose puck in front of Fasth but Matt Beleskey just couldn't finish it. (This was essentially the theme of the night for the Ducks.)

Initially skating away, Beleskey finally answered Steve Pinizzotto's antics, resulting in a nice shiner on his left eye and some time spent chirping back and forth in the penalty box. Not long after, David Perron joined his teammate for tripping. Perry had a chance on a centering pass from Maroon but he could not finish. The uneventful PP ended with Jeff Petry taking a high stick from Smith-Pelly in the follow through of a hit, which went uncalled. With Beleskey heading into the sin bin for the next five mintues, Patrick Maroon slotted into the coveted position of the top line.

Though Hiller made a solid save on Perron's point-blank shot, the Oilers were next to take the man-advantage when Ben Lovejoy headed to the box for holding. In the last shift of the Oilers' PP, Hall tied it with a narrow angle shot through Hiller's five-hole. 1-1.

Maroon's time on the first line didn't last too long since right off ensuing face-off, Maroon and Hendricks gave it a good go. Not long after, the Ducks were short a man when Kyle Palmieri took a holding the stick penalty on Mark Fraser. Anticipating a patient Hall on the left side, Hiller stopped the Oiler from taking the lead. The Ducks kept the Oilers PP unit on the outside. Silfverberg broke through into the neutral zone and nearly had a breakaway if not for a trip by your's truly, Justin [insert expletive here] Schultz. Perron literally skated in circles, and just as the 4-on-4 play expired and Palmieri stepped out of the penalty box, his patience paid off in a snap shot past Hiller. 1-2 after an Oiler's shortie.

The period was undoubtedly a physical one as the Ducks and Oilers were at each other again. Beleskey and Pinizzotto both received 10 minute misconducts after a brief moment of pushing and shoving and a LOT of yapping. The Oilers escaped additional penalty minutes as one of the Oilers skated off the bench to engage despite it not being his shift. Not long after the those two headed to the locker room, Maroon threw gloves for the second time, this time with Fraser.

The Ducks began to dominate possession of the puck but the pressure amounted to nothing as Fasth easily pushed aside shots. Perry buzzed around Fasth the entire night and had near chances, but the Ducks failed to finish them. As if Ducks fans weren't having a more miserable night watching the Ducks trail despite dominating possession, the next worst thing that could happen happened. In one of the small windows that the Oilers regained control, Justin Schultz easily jammed in the loose puck left from Hiller's save off Eberle. Of all f***ing Oilers, Justin F***ing Schultz.

The period ended on another penalty, this time going to Perron for interference. Similar to their last visit to Edmonton, the Ducks headed to their locker room trailing, despite having dominated for most of the period. But this time it was by two goals.

Right off the bat, the Ducks got on it with a rare power play goal. Winning the puck from behind the net, Getzlaf wristed it past Maroon's screen. Corey Perry used Corey Perry skills and tipped the puck for a perfect and much-needed goal. Ducks were back in it 2-3.

The immense pressure by the Ducks forced the Oilers to once again take a penalty, this time on Petry for hooking. The Ducks PP unit [over]patiently cycled the puck along the boards, passing it along. No shots reached Fasth, save for the Getzlaf one that rang off the post.

The first line skated out most frequently throughout the period since Perry, Getzlaf, and Maroon generated the most opportunities. After Perry cut through the Oilers' defense like cheese, he passed to Maroon stationed on the side of the Oilers netminder. Maroon was unable to put it away past the Fasth. Upon a closer look on the play, Maroon missed the wide-open chance that Perry had in front of the Oilers net. More opportunities were generated by Perry, but similar to the period before, the Ducks failed to finish their shots.

With a little more than a minute left, Hiller vacated his end and the Ducks worked to even it up. Sami Vatanen's shot from the blue line ricocheted off the backboards, where Palmieri anticipated the rebound. Unfortunately Fasth was up to the task. The Ducks attempted to regroup for one last rush, but Hall forced a turnover and without looking, Eberle threw the puck towards the Ducks' net for the empty netter.

The Good: 59.6% CF Close. It was a good puck possession game by the Ducks. 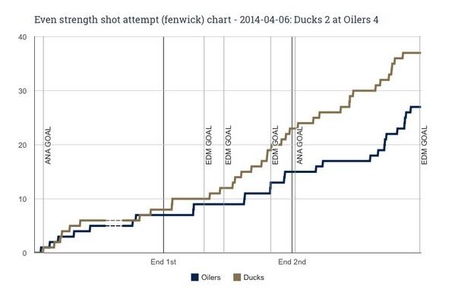 In addition, I have to mention the Silfverberg-Rakell-Cogliano line. In the opening period, that line was by far the most dangerous and formidable. The speed and forechecking ability of that line might be something that Bruce may want to revisit come playoffs.

The Bad: Despite the 59.6% CF Close, the Ducks still fell to the [insert expletive here] Oilers. Despite the shots and the strong puck possession, the Ducks failed to finish them in the end. Honestly, sometimes it seems like the only way the Ducks can score is from a lucky bounce. All hail PDO. 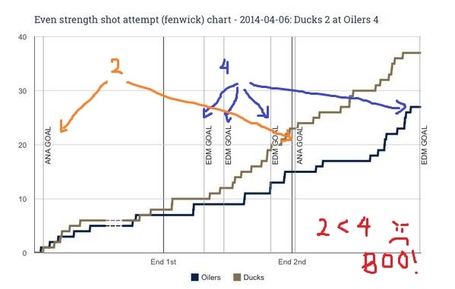 The Ugly: Another game, another setback. With this loss, the Ducks lost a chance to increase the Pacific Division lead over the San Jose Sharks and close in on the St. Louis Blues. Magic #5 my ass. The Ducks are now only ahead of the Sharks by one point with one game in hand. What a waste of two what-could-have-been-beautiful points.

Honorable Mention: Justin Schultz, you little piece of sh**.  Screw you for finishing that rebound on that third goal. I hope you enjoy your time in hell-frozen over. Way to rub salt into the wound.

3rd Icehole: I'm a little torn as to who to name the 3rd Icehole...but I eventually settled on Ryan Getzlaf. Before you start throwing insults in the comment section, hear me out. Yes, I did notice that Beauchemin didn't have a good game. And yes, I considered a moment or two to choose Jordan Eberle, who ended the night with a goal and an assist. And no, I know that Getzlaf didn't necessarily have a horrid showing. But the reason I am choosing Getzlaf has to do with the fact that his past couple games (actually most post-Olympic break) have looked extremely lackluster. The word is lackluster folks....The team, the coaching staff, the fans--we all know the great things he is capable of. We saw it in the first half of the season. Not only did he make plays, but he scored goals. We all expect more out of him.

I am by no means saying he is a reason we lost the game. But the guy did not look sharp today. Nor did he in the last game against the Preds. We know that when Getzlaf wants to play, he will play--and come up big. The lack of consistency is what bothers me so much. At times he opts for lazy plays with the puck, which inevitably results in a turnover. He and Corey Perry are undoubtedly the best players on the team. And despite the Ducks' depth of forwards, the scoring is still heavily tilted towards the first line. That being said, in the last remaining games, Getzlaf needs to set the precedence and be the leader on the ice we know he can be.

But enough of the pep talk--Getz, get it together and clinch the damn division title.

2nd Icehole: Jonas Hiller's game was definitely not as horrible as his game against the Preds. And slotting him as the 2nd Icehole does not mean I blame him for the loss. He was fine the first 20 minutes of the game...but it's too bad a hockey game is a full 60. There is definitely a confidence issue here. Friday night, he was booed out of his net at home after eight shots. [Ed. Note:  Rightfully so. -CK] And tonight, he let in some very soft goals (see the second EDM goal). He seems to be having a lot of trouble tracking the puck and have more trouble with his form. It's all mental from here on out. It should be interesting to see what Bruce does in tomorrow's game against Vancouver.

1st Icehole: Taylor Hall. He's one of the bright jewels on the Edmonton Oilers. He was everywhere tonight doing everything for the Oilers. He was blocking shots, forechecking along the boards, making great passes, scoring goals....He had 1 goal and 2 assists tonight against the Ducks.