Ducks @ Canucks Recap: A Shutout and a Sweep

John Gibson was good. The Ducks defense was even better.

Share All sharing options for: Ducks @ Canucks Recap: A Shutout and a Sweep

Just 15 seconds into the period, Andrew Cogliano had a great chance when he sped past Jason Garrison and was left alone to chip the puck for Eddie Lack's first save. Cogliano's speed never looked so dangerous as he made another bid when he skated right up to the net before losing the puck. However, the Canucks did respond quickly with aggressive forecheck pressure, beating the Ducks along the boards and forcing the Ducks to make turnovers. The Canucks' real-life version of "The Twins"--Henrik and Daniel Sedin reignited their chemistry as they had some good passes through the Ducks defense. Alexander Edler and Ryan Kelser also had a great opportunity in front of Ducks netminder John Gibson.

A turnover in the defensive zone resulted in Hampus Lindholm heading to the penalty box for tripping. (Upon closer review, the penalty actually belonged to Francois Beauchemin.) All was not lost--when Ducks workhorse Daniel Winnik's aggressive forecheck forced Herink Sedin to turnover the puck. Winnik wristed a beauty top shelf past Lack. to give the Ducks a 1-0 lead. Winnik continued the forecheck as he and Koivu had a 2-on-1 breakaway in the remaining time of the Canucks power play.

Remember that OT heartbreaker when a puck crossed the goal line off Corey Perry's skate? Well it NEARLY happened again--the loose puck bounced off Ben Lovejoy's skate, but this time, the puck deflected outside the goalpost. Lovejoy didn't hesitate sweeping away the puck from the net. (For which the Ducks got another lucky break since he covered the puck.) Not long after, the goalpost did another number on the Canucks when Edler's shot rang off the post behind Gibson. Whew.

The Ducks struggled a bit defensively during this period as defensive miscues resulted in a few turnovers and odd man rushes.A turnover along the blue line allowed Henrik Sedin to find his brother for the redirect. Another turnover in the neutral zone allowed a 2-on-1 rush between Brad Richardson and Zack Kassian. A block on Lindholm's shot left the Sedin twins free for a 2-on-1 rush. Rather than allowing a 2-on-1 rush between the Sedin twins Saku Koivu opted to take the hooking penalty. Francois Beauchemin battled Edler in the crease and created a small pile-up in front of Gibson.

The Ducks had their first chance with the man advantage when Richardson took exception after Stephane Robidas laid him out nicely. After Lindholm missed a pass along the blue line, Ryan Kesler broke away alone with the puck. The rookie defenseman made up for the turnover when he lifted Kesler's stick and recovered possession. The Ducks didn't fare all too well for most of the two minutes until the very end when Beauchemin's shot almost amounted to a Cogliano rebound.

The period ended somewhat even-keeled, and the Ducks headed into the locker room with an early lead by a Daniel Winnik shorthanded goal.

The Canucks started the opening minute of the by controlling the game. But the Ducks quickly pushed back starting wtih Mathieu Perrault's breakout that almost led to a 2-on-1 rush before Teemu Selanne overskated and crossed the blue line a step early. A few shifts later, a diving play by Dan Hamhuis was the only thing that prevented Maroon from finishing a nice passing sequence between Perrault and Selanne.

The Canucks struggled to get anything going as they constantly halted play with the icings. When the Canucks finally did get extended time in their offensive zone, Gibson was able to cover up the puck in time. A slight scrum around Gibson led to a 4-on-4 as both Nick Bonino and Richardson headed towards the box on roughing minors. Jakob Silfverberg and Perrault were all over the place as they tried to create chances in front of Lack. But neither team got any great scoring chances during those two minutes.

By mid period, the game came to a lull as neither team could build offensive momentum on either end. The Ducks forced neutral zone turnovers, but the Canucks then intercepted passes. It went back in forth until about the three minute mark when Lovejoy's blue line shot  was tipped in by Kyle Palmieri. Ducks increased the lead 2-0.

The last minute was 4-on-4 play when both Hamhuis and Perrault headed to the locker room for slashing minors. By the end of the second, the tight defense of Anaheim held the Canucks to only three shots on goal through the period.

The period began with the remaining time on the 4-on-4 play--and it was all Ducks. Cogliano had another lone point-blank opportunity after blocking Garrison's shot., but Lack stood tall. Corey Perry faked a shot and found open ice, and yet Lack was in the way again. They say third time's the charm...it was in this case at least. Ryan Getzlaf stole the puck and dropped it for Perry. Instead of shooting as Lack anticipated, Perry passed to Matt Beleskey, who had half the net open. A goal per period. 3-0 Ducks.

After that goal, the play slowed down noticeably. The Ducks were content with making safe plays, chipping the puck off the glass and working off the clock. One of these "safe plays" by Lovejoy actually nearly plowed Beauchemin in the head. Lovejoy immediately skated to the bench to apologize for nearly taking his own teammates' heads off. But the real highlight was when the camera zoomed in on Bruce Boudreau's pink face. He tried hard to stifle his laughter and  keep his calm coach demeanor.

Gabby turned himself pink as Kirby trying not to laugh there.

That is good stuff right there.

All night, the Ducks defense did a very good job preventing pucks from reaching Gibson. But sooner or later, saves will have to be made. And Gibson's save of the night came on Vancouver rookie Nicklas Jensen. Kesler's pass found Jensen right in front of the net, but Gibson made the sprawling save to protect his shutout.

The Canucks still had a chance to to stay in the game when Beleskey took a slashing penalty against Kevin Bieksa. The Ducks quickly and efficiently killed off that penalty. The remainder of the period was dominated by tight defense by Anaheim. With the Ducks clogging the neutral zone, the Canucks struggled to break through and spark an offense. By the 17 minute mark, "Fire Gillis" chants filled the arena.

The Ducks played a solid road game and allowed John Gibson to take home a priceless memory of his first NHL debut and shutout.

The Good: Sure, John Gibson was good--but the Ducks D was even better. I'm not sure if it was the Ducks making the extra effort to protect the rookie netminder but boy was the defense solid. Apart from the few shaky neutral zone turnovers in the first, the Ducks did a tremendous job blocking shots and making smart and quick clearing passes. I was a bit skeptical with Sami Vatanen being scratched, but the defensemen really answered the call. After taking the lead, he Ducks opted to play conservatively and shut down any remnant of the Vancouver offense. One would hope to see the discipline and efficiency of tonight's defense appear in the remaining three games.

Oh, and we're back on track by earning the two extra points. If the Ducks beat San Jose on Wednesday the division will be clinched.  The "magic number" is now only three.

The Bad: Vancouver allowed a rookie netminder (albeit American Hero) John Gibson to post a shutout in his NHL debut and dash any figments of playoff hopes. Sucks to be you Vancouver.

The Ugly: Not only could you spot empty seats on the television, but the "Fire Gillis" chants that echoed through Rogers Arena with about three minutes to go basically summed up the status of the Vancouver Canucks. It does not bode well for the Vancouver GM. We all know what angry Vancouver hockey fans are capable of... 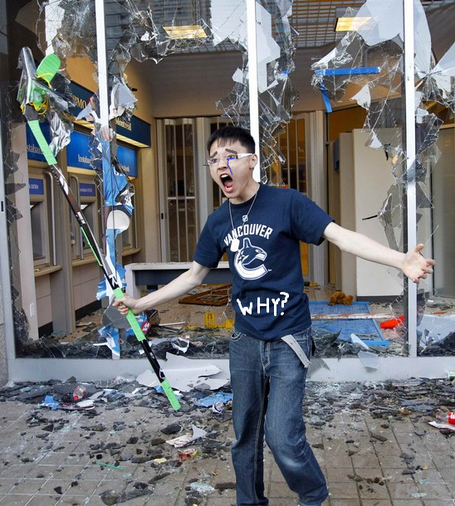 via pbs.twimg.com (There's even a wikipedia page documenting the anger.)

I would definitely watch my back if I were you Gillis. But hey, at the least the fans in Rogers Arena didn't start the wave! *thumbs up*

Honorable Mentions: The entire Ducks blue line: Robidas, Allen (shocking to some of you, I know), Sbisa, Beauchemin, Lovejoy--these guys were awesome tonight. With the exception of a few defensive miscues in the first, the blue line tightened up in front of Gibson and made it very difficult for pucks to get to him. Each one of these players blocked shots, used their sticks, and played smart. It's been a while since my soul felt at peace. And it's been a while since I went through a game without letting out a string of curses.
3rd MVD: Daniel Winnik and Andrew Cogliano- Daniel Winnik is a workhorse. And a beast. His size and aggressive forecheck on the penalty kill has resulted in shorthanded opportunities several times this season. This time, he was able to get the full recognition of his hard work. Like in every game, he created opportunities for his line mates by winning board battles and retrieving all the loose pucks.
On the other hand, you also have Andrew Cogliano with his blistering speed and aggressive forecheck. Like Winnik, he has also created numerous turnovers and shorthanded opportunities on the penalty kill. Although he did not end up on the score sheet, he looked dangerous all night, He had three wide-open opportunities that he made for himself by either forcing a turnover or skating his ass off.
2nd MVD: Hampus Lindholm. He may have given the puck away at the blue line to Kesler, but the boy hustled back, and made up for it--WITHOUT taking a penalty. This kid is so talented--can't say enough about him. Keep in mind he is only a rookie, and he is without a doubt a top-4 defenseman. He skated, he blocked a few shots, he made smart pinches, he broke up 2-on-1 rushes MORE THAN ONCE.... The entire blue line played well this game, but Lindholm stood out among them. Of course it helps that his partner on D is veteran Beauchemin. But Lindholm made some huge plays on those Vancouver breakouts. Definitely deserves a Calder nod.
1st MVD: John Gibson. I personally feel like the entire Ducks blue line needs to be given credit for tonight's win, but a rookie goaltender posting a shutout in his NHL debut--how can I not give him first MVD? He did not face a tremendous amount of shots (thanks to the Ducks defensive corps), but he did track the puck very well and did make a few key stops on the Canucks. What's not to like? May this be the first of many "First MVD's" in your future John Gibson.
Hampus Lindholm. John Gibson. Not to mention the many other young assets we have in our system and our team. The future is bright for Anaheim!

Next Game: vs. San Jose Sharks, Wednesday, April 9, back at the Honda Center