In this episode, I save the universe for all the future pizza eaters out there.

This is going to be a little shorter this week. Three games, three somewhat similar efforts in terms of letting the other team dictate the pace, and three games with teams outside the playoffs. Ah, the dog days of a team faltering down the stretch... 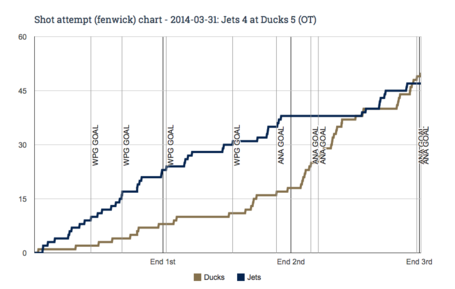 The Great Historical Ducks Comeback (after a first period of being thoroughly outworked by a non-playoff team). 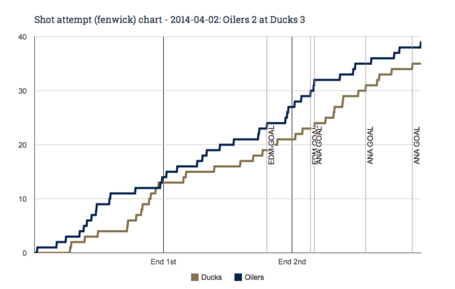 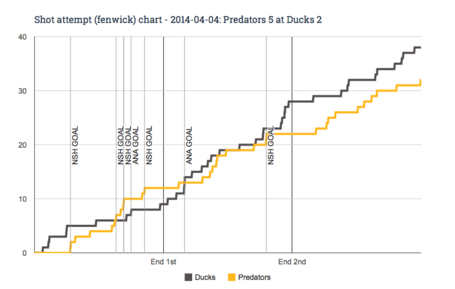 There's a theme here that's obviously apparent in the first two games but present in the third game too: the Ducks line up against three non-playoff teams and get outworked fairly consistently. In the first two, the Jets and Oilers straight up come out ready to trade bombs, and the Ducks were flat as all hell. Against the Predators they had a spectacular first few shifts but then just flatlined from there, letting the Preds carry play despite leading in the game.

That's a big problem. That's a problem for exactly the reason I've been saying it's a problem all year: save percentages fluctuate (see Jonas Hiller's recent string of suck), shooting percentages fluctuate (shooting a still-high 9.1% vs Nashville netted us only TWO MEASLY GOALS). What doesn't fluctuate is playing more with the puck (shot attempts for) while preventing the other team from playing with it (shot attempts against).

And the Ducks are flat out bad at having the puck more often until the score changes. That's garbage, especially when goaltending goes through a rough stretch like it has of late, because the score is often changing against our favor first. Chasing the game is rough.

Look: Hiller's been unlucky to outright bad in a few very recent outings, as highlighted by his only week 25 start against Nashville. And normally he sits a bit and great, the season goes on (like it did in November, when he had another tough time). The timing of his struggles worries us more now because there's no time left in the season to work out the kinks.

But check out those two games against the Jets and Oilers: the Ducks basically stood there and let the opposite teams take shots. No goaltender is going to look good with that hot mess in front of him. Sure, they came out harder against the Predators from the outset, but they couldn't stop the Preds attack at any point to give the goaltender any breaks from the trouble he was in. And goaltenders can have flat starts too.

This should trouble us a bit. Sure, we want to avoid playing the Kings in round one. But if the Ducks keep playing this way? Then even, say, the Wild are a very real threat if the team finishes tops in the Pacific, which is even more embarrassing. Finishing in first should indicate good play, not banked points early on. Give me a blown top slotting and the Kings and at least a rivalry series before an embarrassing 2-vs-7 upset any day.

In a way, closing the season with three games against playoff bound teams is very good. This Ducks team comes out hard against rivals and big teams. Everyone should be on top of their games, which is ideal going into round one.