In order to successfully siege the Kings castle, the Ducks are going to need to get past their steadfast gatekeeper.

The Los Angeles Kings are a very, very strong defensive team, and most of that credit needs to go to their masked men between the pipes. Young Martin Jones came flying on to the scene this season, winning his first eight NHL games. While the 24-year-old rookie couldn't maintain that torrid start, the impression he gave that he can be a reliable netminder was strong enough to cause the front office to deal Ben "The Professor" Scrivens.

While Jones is a great goalie that has proven (in his NHL debut, no less) that he can hold off the offensive onslaught of the Anaheim Ducks, we all know who will be receiving the call to duty in Game 1.

Jonathan Quick, the Connecticut native, will be the biggest wall for the Ducks to breach if they want to make their first Western Conference Finals appearance since their 2007 championship run. The starter for Team USA's Olympic squad is one of the most purely athletic players in the league right now, but if that wasn't good enough, he also possesses the inhuman ability to contort his body in ways that many other goalies cannot in order to keep his net clean. Can you do this? 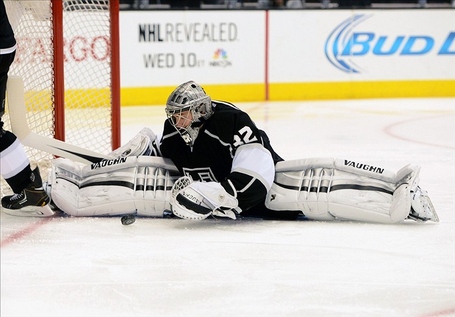 He's a freak. And I (reluctantly) mean that in the most flattering way.

How did their season go?

Quick's regular season and postseason have been very similar this year, as he started slow in both campaigns before righting the ship and playing the type of hockey that opponents have come to dread. As I said earlier, should Quick be unable to fulfill his duties, the Ducks still have a big obstacle to overcome in Martin Jones. Remember how excited we were all season to have at least 3 great goalies that could suit up at any given moment? While LA doesn't have Anaheim beat in quantity, their two tendies have consistently been just as, or more reliable over the last few months.

After an unsatisfying start to the playoffs, to say the least, Quick battened down the hatches and Gandalfed almost every puck fired at him for the next four games. 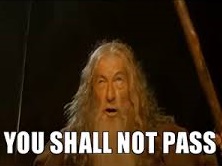 The difference in his numbers is mind-blowing, and to an extent, they show how crucial #32 is to the Kings' success.

That lower row there? That's a white hot Jonathan Quick leading his team into Honda Center. God help us.

Good news and bad news when looking at this table: the good news is that there's a lot more losses against the Ducks between the two than wins this season. The bad news is that these numbers are still pretty solid for the most part. Unfortunately, expecting Playoff Quick to get into the habit of having sub-.900 nights is probably going to be pretty futile, and as we saw this season as reinforced by these GAAs, the Kings' defense is excellent at making even one of the game's most elite offensive juggernauts work to put points up on them.

The question, then, is can the Ducks' defense hold off LA gunners such as Anze Kopitar and Tyler Toffoli long enough to allow the Anaheim offensive to break down Quick or Martin?

One of the worst realities that Ducks fans face is the fact that the Kings are currently shooting for their third consecutive appearance in the Western Conference Finals. In these last two years, Quick has been nothing short of stellar in the playoffs. One more table for the road?

Keep in mind that in 2013, the Kings bowed out in five games to a Chicago Blackhawks team that was the cream of the crop from start to finish last year. Even though that record looks mediocre, the latter two numbers are a more accurate representation of the effect that Quick had on that team. I still stand by the notion that Quick was the only reason that the Kings won the Stanley Cup two years ago; if it wasn't for his play down the stretch of the regular season, his team would have missed the playoffs and his offense would have had to wait a whole summer to hit their stride. Long story short, Jonathan Quick is the kind of playoff goalie everyone wants to have.

Jones, on the other hand, has yet to be scored on in his first go-round in the NHL playoffs, turning away four shots in 18 minutes after relieving Quick in the Game 2 schadenfreude against San Jose.

We all know that the Ducks have their work cut out for them in this series, and as good as the Anaheim goaltending situation may seem to some on the outside looking in, Los Angeles definitely has the upper hand in this category. In order to advance past Quick and friends, the Anaheim offense will have to be Rambo-level devastating. 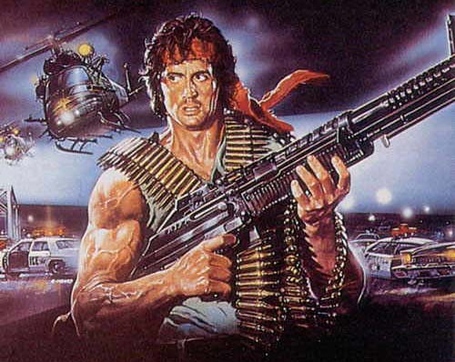