Share All sharing options for: Playoffmetrics, Round Two: Game Four

Game four was the Ducks version of the Kings game two, but on like, steroids. Or something.

The only real way to understand this game from the stats perspective is to look at the first period, when the Ducks were more or less still attempting to score goals. Let's start there after I drop in the extraskater shot attempts charts.

Here are all attempts: 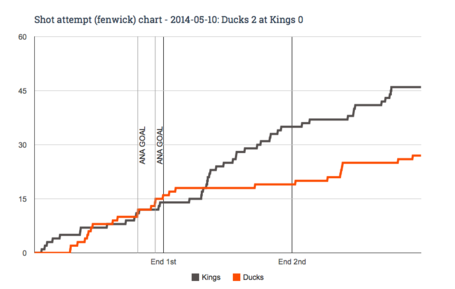 Here are the even strength shot attempts: 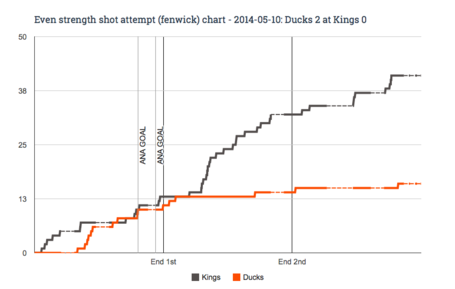 The Kings were pretty dominant very early in the first period, getting their first two real significant chances to score. The Ducks came back and held their own, but I'd say the forward play favored the Kings a bit more until the scoring occurred. Interestingly enough, I thought the defensive play favored the Ducks a little bit more, which against this Los Angeles team is the real victory.

What I mean by that isn't that Anaheim's defense was better. This isn't anything about John Gibson (yet) either. The Kings had two very potent scoring chances early on, and I thought both came from how strongly the team was pushing and because they got in on the defense quick. The defense tightened up pretty quickly though, and the Kings had to work much harder to get significant chances the rest of the way.

Meanwhile, the Ducks had a very limited time of attack in this game. They were able to get inside on the Kings defense much easier, which created some iffy spots on their end of the ice. The scoring chances the Ducks put together were those designed specifically to challenge Jonathan Quick's aggressiveness in net, and they succeeded.

Obviously all of that changed pretty early in the second period. The Ducks sat back the same way the Kings did in game two, except the Ducks went into a blocking shell around Gibson more than the Kings did. This was virtually identical to how the Ducks played in Gibson's first start in Vancouver.

At that point, the shell game was really about limiting the Kings ability to create scoring chances. They forced the puck high to the points often (good in a blocking shell) without allowing them to work the puck into the middle from nearer the goal line (dangerous to a blocking shell due to the stationary positioning of the defense). The Kings numbers were boosted because the Ducks weren't retrieving pucks at all once the shots from the point came in, but to Anaheim's credit they didn't allow much offense from the wall near the faceoff dots after the initial shot either.

The real story of the game can therefore be summed up in the chance count. After the first period, the Kings had four chances (all at even strength) and the Ducks had three (two at evens). The next two periods saw the Kings chances jump up to about 12 or 13, but all were at even strength.

Therefore the Ducks best play was during the penalty kill. They collapsed well enough to prevent any man-advantage scoring chances, and it frustrated the momentum the Kings were building at even strength each time. At the end of each scoring chance-free power play, the Kings had to get back to trying to open up the Ducks defense.

Gibson was phenomenal. There were two or three really spectacular saves he had to make all game, but otherwise his extremely impressive positioning kept him square to most pucks all night. (He was bailed out of his pad stacking adventure by Ryan Getzlaf in the second, obviously.)

In very limited minutes, Rickard Rakell and Kyle Palmieri were very good. At some point, Boudreau is going to need to see what Rakell can do in an expanded capacity. Devante Smith-Pelly was once again strong, and his addition to the top line only boosted how dangerous they were in the first period. Corey Perry had two assists, which is also good considering he'd been less impactful in this series than against Dallas.

On the defensive side, Sami Vatanen was once again tops, to the surprise of nobody. But Hampus Lindholm excelled in this game, which is fabulous because this is the sort of defensive game he should be great at. The idea of Lindholm and Vatanen playing behind Cam Fowler (who is so, so good) for years to come is very exciting.

Now, all that being said: I never want to watch the Ducks win without taking a shot on goal for an entire period again. I think we can all agree with that.