The Anaheim Ducks exploded for three goals in the second period, but in typical fashion sat on their lead and gave everyone watching a heart attack because OH FOR CRYING OUT LOUD WILL SOMEBODY COVER MARIAN GABORIK!?!?

First Period Recap: For quite possibly the first time in this entire round, the Ducks were the ones hot on the gas right from the opening faceoff. Sure enough, it paid dividends.

Just 2:15 into the game, the Ducks capitalized when Jake Muzzin blew a wheel in the corner, losing control of the puck to Daniel Winnik. Winnik fed a wide open Nick Bonino low in the right circle, who then snapped the puck right past a more or less helpless Jonathan Quick.

Early goals have been a key factor in this series, and thankfully this time it was the Ducks getting the big one to take a 1-0 lead.

The Ducks also had some other fantastic chances early. Teemu Selanne was denied on a bid from in close, as was Devante Smith-Pelly. Ryan Getzlaf also had a good crack at the Kings netminder swallowed up without a rebound. Make no mistake about it, this Jonathan Quick guy wins game for the Kings.

After several more good shifts of high-pressure forecheck, Anaheim fell asleep for a few minutes and things promptly turned into a tire fire in the defensive zone.

Between approximately the eight and fourteen-minute marks of the first period, I personally counted seven defensive zone turnovers from the Ducks.

One of the biggest weaknesses of the Ducks this entire season, one which they had done a pretty good job rectifying to this point considering the high-pressure forechecking style the Kings are so good at, suddenly became a huge problem again.

And it cost the Ducks during this stretch.

A miscommunication between Sami Vatanen and Bryan Allen left the puck sitting all alone in the neutral zone where Trevor Lewis picked up, walked in almost uncontested, and ripped a shot past John Gibson to tie the game at one.

At the time this was somewhat against the run of play, but the momentum that was starting to slip suddenly tumbled entirely in the direction of Los Angeles.

Turnover after turnover in the Ducks end gave the Kings a wealth of golden scoring opportunities that made John Gibson stand on his head. And boy did he ever.

Gibson made 13 saves through the first 20 minutes, saving the Anaheim Ducks' bacon on multiple occasions.

The period ended with the Ducks getting a pretty respectable 12 shots of their own and the score tied 1-1.

Second Period Recap: Despite LA appearing to come out of the locker room hungry again, the Ducks did exactly what they needed to do: shut them down by scoring.

Just 1:11 into the period, Teemu Selanne won a race to a dumped-in puck on the power play, circled the net, and found Matthieu Perreault wide open with a beautiful pass for a tap-in goal. Initially Perreault was awarded the goal, but replay later discovered it tipped off of Devante Smith-Pelly's skate before going in.

And then just over a minute later they did it again.

Ryan Getzlaf picked off a breakout pass from LA, carried it across the blue line, then fed it to a streaking Devo who put a sweet backhand move on Quick to bury the Ducks third tally of the game.

About six minutes after that, Jakob Silfverberg got to a rebound and slipped it by a sprawled out Quick to extend the lead to a whopping 4-1.

The biggest lead of the series for either team could only spell one thing for Anaheim: they were going to sit on it.

And almost immediately they started trying to do so. Seriously, you can even see the exact moment: 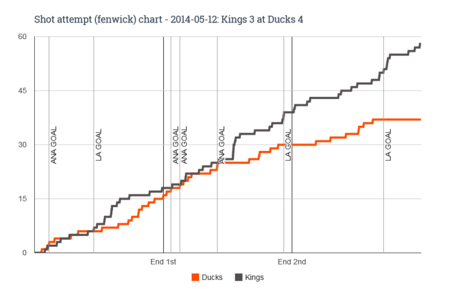 And as you might guess, the Kings got one back at a horrible time.

With DSP serving a double-minor for high sticking Drew Doughty right to the face/mouth/chin area, the Kings power play broke through the Ducks surprisingly-good penalty kill with relative ease.

A scramble in front saw the Ducks fail to clear the puck, and Marian Gaborik once again eluded his defensive coverage and blasted a puck home from about four feet in front of the goal crease. A bad power play goal to give up, as it was before the two-minute mark of the penalty, and with less than two minutes remaining on

How he was wide open four feet in front of our goal crease is beyond me, other than the defense falling asleep for just a split second too long. And with how dangerous Gaborik has been in this series, that's unacceptable.

All in all, 14 more LA shots went Gibson's way in the second period, while Quick only saw 10 from Anaheim, and the Ducks went to the locker room ahead 4-2.

Third Period Recap: So this period had all the makings of a disaster: a two-goal advantage (that the Ducks were in full-blown sit-on-it mode), the period starting with a penalty kill, and LA going into their best period statistically in the playoffs by miles.

And needless to say, it was.

After getting zero shots on goal in the second period of game four, the Ducks managed a whopping two in the final 20 minutes of this game, playing nothing but defense, defense, defense the entire time.

Any forays into the Los Angeles end were usually snuffed out almost effortlessly as the LA defense quickly moved the puck away from any danger and back towards the Anaheim end (and probably about eight more shot attempts per entry).

The Ducks breakout went to hell, as a ton of missed passes went for icings, leading to a lot of mismatches that Boudreau was forced to deal with.

The Kings outright dominance in the faceoff circle all night really took its toll as shift after shift in the Anaheim end started with LA in control of the puck.

And then of course right at the perfect time to start inducing grey hair and heart attacks, WHO ELSE would bring the Kings back to within one but Marian Gaborik, scoring his FIFTH GOAL OF THE SERIES GIVE ME A FRIGGIN' BREAK!

This time, the clearly stronger Gaborik planted himself in front of the net, fought off the pushing of Sami Vatanen, and tipped a puck through that glanced off of Vatanen's skate and behind Gibson to bring the Kings back within one.

Despite the Ducks giving the Kings three more sparkling scoring opportunities in the remaining six-plus minutes (and about a dozen more that were merely great chances), the young Ducks netminder once again bailed his team out and held on to give the Ducks an agonizing but vitally important win in game five at home; the first win in the series by a home team.

And once again, in a stretch of remarkable consistency, LA put 14 shots on John Gibson, who was equal to 13 more of them.

Ducks win game five 4-3, and are now one win away from coming out on top in the first freeway faceoff series.

The Good: The Ducks showed a brief spell of exactly what they are capable of: extremely dangerous offense that can rip even the most airtight defenses to shreds when their execution is on point. That second period was magical from an offensive standpoint, despite the score really not telling the story of the game all that well. Also... the Ducks won an extremely important game five at home. In terms of must-win playoff games that's about as big as they come.

The Bad: And then the Ducks tried to hold on to said lead. After a first period which had probably eight defensive zone turnovers alone, the Ducks got complacent and started trying to sit on their lead with approximately 30 minutes still to play. That's far too long against a team like LA that can just swarm your net with offensive pressure. There was very little about the first and third periods that was pretty.

The Ugly: The Ducks gave up 14 shots in every single period! I know LA's game is to shoot a lot but come on this kind of playing with fire just isn't going to hold up. The Ducks were SO lucky to hang on to this one they probably exhausted an entire box of hearts, stars, horseshoes, clovers, blue moons, pots of gold, rainbows, and red balloons all in the same game!

Oh, to hell with it. I say this every time and yet they keep winning. I give up. I have no explanation for this.

3rd MVD: This was a tough call because I had a couple guys I could put here but I'm going to give this one to Ryan Getzlaf because this may have been the best I have ever seen him from a defensive standpoint. When the two were on the ice together (i.e. when the Ducks didn't take a stupid icing infraction), Getzlaf almost entirely negated the efforts of Anze Kopitar all night long, which is a critical part of LA's offense. Additionally, Getzy powered much of the offense and even set up DSP's stunner of a goal in the second period.

2nd MVD: Devante Smith-Pelly was all over out there tonight. His backhand goal was stunning. His/Perreault's goal was big in that he was a massive force in front of the net. He threw his weight around. He got under people's skin. And he even got picked on by the referees. Sounds like a pretty complete night as far as Ducks usually go.

1st MVD: John Gibson won this game for Anaheim. Once again the 20-year-old netminder continues to be absolutely spectacular in net, stopping shots that I genuinely don't think Jonas Hiller or Frederik Andersen would stand a chance at saving (and I genuinely wouldn't blame them if they didn't). The Ducks defense played rather poorly in front of him yet again, and still he continues to answer the bell with what can only be described as goaltending heroics. Man, this kid is good.