That game was an exciting as game one but with a better result. That's my official analysis, thanks for coming out!

Share All sharing options for: Playoffmetrics, Round Two: Game Five

The Anaheim Ducks and Los Angeles Kings are engaged in quite an interesting series, one that perfectly illustrates the flaw in over relying on possession data in such a small sample of games. Other than game one, which was evenly contested and very exciting, every game since has featured the better team (with the puck) losing. The Ducks dominated possession in game two but weren't actually very threatening, and they lost. The Kings had the edge in game three but the Ducks held on to a lead despite a hairy finish with Jonas Hiller coming in. Game four was an outright abomination in terms of the Ducks shelling, but they did succeed in limiting the Kings scoring chances significantly, and they won.

Game five was more like game one in that it was exciting and, up until the Ducks scored two goals earlier in the second period, was more or less back and forth in terms of puck usage. The Kings had the edge there, but then again they usually do. Because of the way the series has unfolded, and this game serves as the perfect example, I've been paying only half a mind to traditional puck possession (the Kings are better at this) and more to which team generates the most scoring chances (the Ducks have been better at this in this series).

Oh, here are the charts from extraskater. First up is the total shot attempts minus blocks: 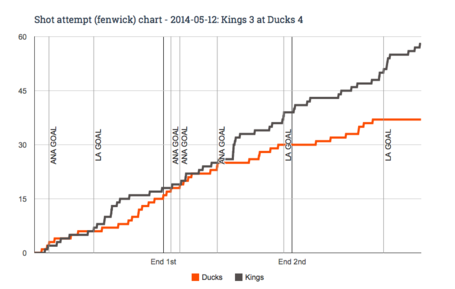 Next up is the even strength shot attempts minus blocks: 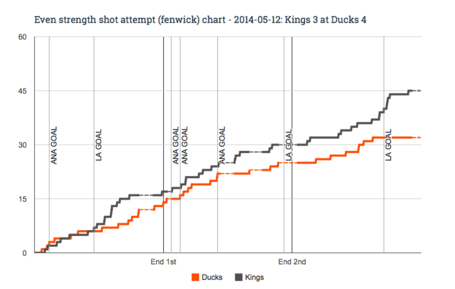 I floated this idea to some buddies last night, but in the way the Dallas Stars were the specific opponent who could give the Ducks the most trouble in round one, it seems like the Ducks give the Kings fits more than other teams. The Ducks have no problem winning games in which they are out-possessed (the Kings specialty) because they tend to forgo a lot of time on attack with higher than usual chance generation.

This isn't really the most advisable strategy for long-term success. It relies on a lot of variables that just being better at controlling where the puck is on the ice can mitigate. It also relies a lot of the specific talents of certain players up front and the hope for favorable bounces. But at the same time! The Ducks have been (mostly) exciting to watch because of it. Furthermore, the playoffs are segments of short series in which luck can override the best game plans. A win in the playoffs is THE biggest thing.

So what do I mean by it, in terms of the possession vs chances? Outside of that second game, the Ducks have largely generated far more chances at even strength than the Kings despite not having the puck in the offensive zone as often. The Kings have two defensemen out, so that could help. (The Ducks have their trade deadline defenseman out as well, so whatever.)

Once the postseason ends and the Ducks are done, I'll be able to watch the games again without as much fan interest. When I do, I plan to see how the Ducks do this. Is it a specifically designed system the Ducks employ that may pass up zone time for chance creation (doubt it) or is it just the creative talents of a handful of really talented offensive players (which I suspect)?

So that's pretty interesting. Aside from shot attempt share as our proxy for time of possession offensively, the Ducks had an efficient game. This was helped along by a very fortunate shooting percentage, but when the team is generating the same amount of chances on less time on attack, there's an implied higher S% edge we can likely expect. I usually factor that in when I'm calculating things if I can, it's just that without manually tracking chances, we're stuck with the corsi-chance correlation that's.... oooh none of you care about this part. Fine, fine.

In summary then. The Ducks got inside on the Kings defense much easier than the other way around. They were forcing the Kings outside through the neutral zone and more or less owning the middle of the ice in transition. I wasn't tracking carries in this one (I can't do both chances and carries in the playoffs), but my eyes recall the Ducks carrying in pretty well early in the game before resorting to more dumps once the score changed. The Kings were a pretty steady mix but they tried to hard dump a puck in with Jonathan Quick on the bench late in the third instead of carry it, and I'll never understand why any team does that ever.

Oh, and my wife reminded me of something: I said before the Kings are built for now, the Ducks are built for the future. I still feel this is true, but isn't it something how the Ducks future has been performing extremely well in the now? The mix of young draft picks and shrewd trade targets are stepping up as Ryan Getzlaf and Corey Perry are locked down against Anze Kopitar and Drew Doughty. That has to continue if the Ducks have any chance to close this series out.