The Ducks got beyond the first round and gave one of the best possession teams in the league a real run! Chins up, kids.

Share All sharing options for: Playoffmetrics, Round Two: Game Seven

I'm going to do one more Playoffmetrics to get a few ideas about the series itself, but this is the game seven post. In that one, I'll get to the momentum shifts that occurred and my thoughts, in hindsight, on why Boudreau went away from Jonas Hiller in net. I think both teams altered strategies at least twice, and ultimately the deeper team won out.

Before I looked at some of the underlying numbers from game seven, I was pretty displeased with how it unfolded (score aside). But looking at the numbers, there wasn't anything more Boudreau could do behind the bench to get the matchups he wanted or to get his best players on the ice the most. That Cam Fowler and Sami Vatanen basically led all defensemen in even strength ice time, followed by Hampus Lindholm, shows that he was trying to get his best defenders (albeit inexperienced in big game situations) out there most.

As I think about it, especially in light of the entire series and removing the sour effects of the score itself, game seven was the better team (more forward and defensive depth overall) prevailing. And in that way, I have to hand it to the Ducks: this was a transition year, regardless of the marketing of "unfinished business." The top-end prospects were kept off the big team due to the old guys, and this was the year to compete while waiting for the forward groups to sort out with time.

The Ducks took one of the top four teams in the NHL to game seven of a close series when not in "going for it" mode. That needs to count for something, because championship level teams aren't built for specific years, they are built for windows. And if the kids end up being as good as projected, the window is opening for this team. (Hastened even more if Murray can unclog the defense this summer.)

I already strayed from the game itself though. Here are the shot attempts (minus blocks) in all situations, courtesy of extraskater: 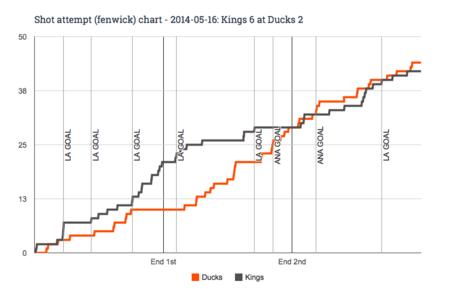 Here are the even strength shot attempts (minus blocks): 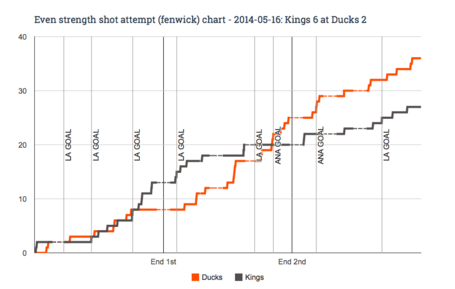 The Kings opened the game throwing everything at the Ducks defense as quickly as possible, and it worked because of a special teams goal. Ben Lovejoy was beat and interfered with Dustin Brown, a goal later, the Kings had the upper hand and the Ducks opened up to try to create offense and got burned. The second goal was off the rush, which is pretty incredible considering how dominant possession teams generally slow the game down with zone time.

Sutter optimized his forward lines to get a faster attack for this game. The Kings tend to dump slightly more than most teams, which works because they lock down the neutral zone to prevent opportunities the other way. So even if they fail to recover a dump-in, they tend to be dumping it back in right away anyway. They don't generate more shots than anyone else off their dumps, but they sure seem to have more zone entries per possession.

But the Kings had the most success in game seven carrying the puck through the middle of the ice. Once the Ducks began incorporating more trap elements into their game (game three and on), the Kings weren't generating as much from the walls as usual since both teams are roughly the same size. I doubt Los Angeles wants to play this way all the time, but once the focus was put on speed, it took the Ducks longer to counter.

There's really not much more to this game other than recognizing that for as much as we want to say the Ducks didn't "show up," I think it was more that the Kings just did a better job executing. The first three goals were essentially one-off mistakes somewhere on the ice, whether it was taking a penalty (against a rush with speed) or a clumsy turnover in the offensive zone. They weren't goals born from the dominance of zone time except that such a thing tired out the team.

It happens. Too bad it happened in game seven of the second round. But I can't be too upset losing to this Kings team now, and I think the way the Ducks showed for themselves in the series opened some eyes about their intent in the future. But that's a narrative, so whatever.

One last thought on game seven: Teemu Selanne was absolutely flying. I published some critical words on his play after game six, but he was all over the ice in game seven. I have to credit him for that: whatever skill he's lost due to age, he always had a flair for showing up at opportune times. With a couple more favorable bounces after the first 10 minutes of the game, and he had positioned himself to be a difference-maker on the night.

And talking about bounces? Imagine if Corey Perry was less of a pure shooter and more the type to deke someone out of his skates, for instance. A penalty shot and at least two clean breakaways and game seven is going down to the wire. Jonathan Quick had to be very good to make the Kings offense hold up, let's not forget.

I'll get into some other stuff later. Other players. I don't know. I'm pretty whimsical about it all, really. Thanks for reading.